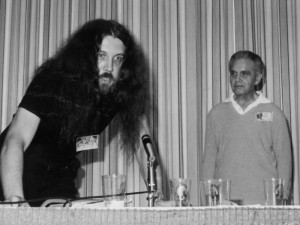 Jackie Estrada needed $18,000 of pledges to publish Comic Book People, a hardcover photo tribute to 40 years of Comic-Con. Her Kickstarter appeal was a complete success – by yesterday she’d received $28,360 in pledges from 438 backers.

Estrada has been taking photos at comic book conventions for decades. Comic Book People will publish 600 shots of comic creators and other notables from the 1970s and 1980s. Most will be in black-and-white, but there will be a 16 page color section.

Here are just a few of the people she plans to include:

Her goal is to have the 160-page book ready for Comic-Con this July.