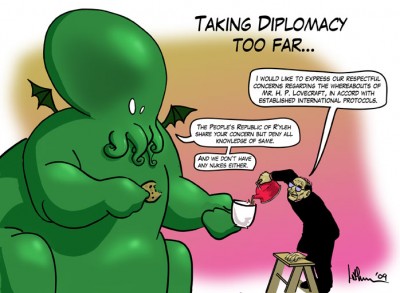 Larry Latham, the Lovecraft Is Missing webcomic artist, died November 2 of cancer. His wife Kelly Reynolds announced his passing on the site’s blog. She promised the tale would be completed:

This webcomic was his crowning achievement and brought him more joy than any other creative endeavor he has ever participated in. He was so appreciative of his readers and did not want to leave the story unfinished. I ask for your patience as I attempt to carry out his wishes and resume posting new issues in the near future with the help of many talented friends.

Latham began writing, drawing and publishing Lovecraft is Missing in 2008. The project had been originally conceived in 1994 as a CD-ROM game (never produced), then went into development as an animated series, with the rights finally reverting to the artist.

From the 1970s through the 1990s Latham enjoyed a successful career in animation, working at various times with Disney, Hanna Barbara and Marvel. His credits as a story director included The World’s Greatest SuperFriends, Godzilla, The Fonz and the Happy Days Gang, The Smurfs, and Challenge of the GoBots, and as a storyboard director or artist on the earlier My Little Pony and Friends series, several videos, and assorted episodes of about a dozen other shows.

He gained his greatest recognition as a producer and director for Disney’s animated series TaleSpin, the pilot episode of which earned him a Primetime Emmy Award for Outstanding Animated Program.

As a youth, Latham was one of the founding members of the Oklahoma Alliance of Fandom, which had its 40th anniversary convention in 2007.

After Latham was diagnosed with cancer he blogged about the progress of his treatments and his hopes for recovery. Not only did this feel right to him, it paralleled what Lovecraft himself had done —

Lovecraft kept an actual journal of his dying days, even through all the tremendous pain. An odd one to the end, he. 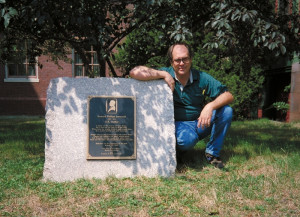 Larry Latham at the grave of H.P. Lovecraft.

[Thanks to Steve Johnson for the story.]