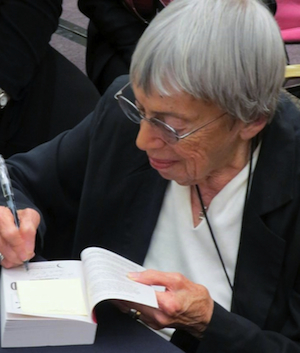 Ursula K. Le Guin will receive the National Book Foundation’s 2014 Medal for Distinguished Contribution to American Letters at a ceremony on November 19 in New York. Neil Gaiman will be the presenter.

Ursula Le Guin has had an extraordinary impact on several generations of readers and, particularly, writers in the United States and around the world. She has shown how great writing will obliterate the antiquated — and never really valid — line between popular and literary art. Her influence will be felt for decades to come.

The Associated Press says Le Guin agreeing to accept the award is itself a story.

She has criticized the “commercial machinery of best-sellerdom and prizedom” and mocked the idea of being “Nobel Prize Winner Soandso” or “Jane D. Wonthepulitzer.” But in a recent email to The Associated Press, she said that she was grateful for being Ursula K. Le Guin, honorary National Book Award winner.

“I’ve spoken against the whole winners-take-all concept of literary awards, but it’s the only game going,” she wrote, “and I’d be a curmudgeon not to see this award as an honor.”