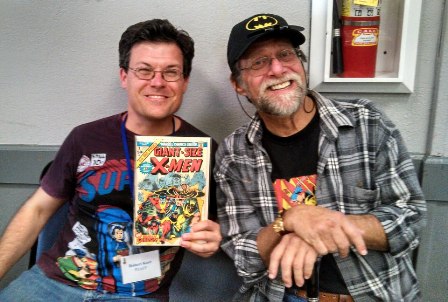 Len Wein, creator of Wolverine, the New X-Men and the Human Target, as well as co-creator (with Bernie Wrightson) of the Swamp Thing, died Sunday, September 10 reports David Gerrold.

Wein’s Facebook fan page had announced at the end of August he was entering the hospital for more foot surgery and other unspecified procedures. In 2015 he had triple bypass heart surgery, and since then had been in the hospital to treat other problems.

He is survived by his wife Christine. When they suffered a house fire in 2009 one of their close friends, Harlan Ellison, showed up with a shovel to help find salvageable things in the ashes. Wein’s comics went up in the blaze, and another friend, Mark Evanier, led an appeal to crowdfund the replacement of his collection.

Wein worked for all the major comics publishers at some point. He was Editor-in-Chief of Marvel and Disney Comics, and Senior Editor at DC Comics. He has written Superman, Batman, Wonder Woman, Justice League, Green Lantern, Flash, Spider-Man, Hulk, Thor, Fantastic Four and The X-Men.

In television, Len developed and story-edited War Planets: Shadow Raiders. He scripted over 60 episodes of other animated series.

Wein’s first wife was Glynis Oliver, a comics colorist who worked on the X-Men titles.

He was inducted into the Will Eisner Comic Book Hall of Fame in 2008.