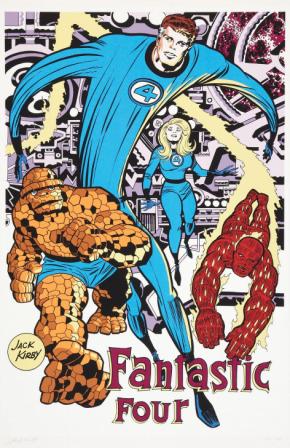 By James H. Burns: A Fantastic 4 movie is relatively so simple, with no need to invent a whole new gobbledygook of an origin story… Last night, thinking about the generally poor reception to the new Fantastic 4 film, I wondered, how hard could it be to tell their origin story, which to me, remains pretty steadfast. I noodled this, in minutes….  (And without the comic in front of me, I could only not recall one crucial element, why Reed Richards lets a teenager join them on the trip to space…  But you’ll see!)

Why have all the producers through the years thought it necessary to muddle a rather elegantly simple story setup? Steadfast scientist, in his late thirties or early forties, who’s ALSO a brave decorated war veteran, his jet-fighting pilot best friend, the woman he’s in love with (who’s ALSO brilliant), and a smart young adventurer…  By the way, I don’t know that having Dr. Doom in the very first story is always the best idea, but here we go!

Reed Richards is a brilliant scientist, with MEANS, due to a series of successful inventions and developments. Ben Grimm is his best friend; they both served fighting terrorist forces in the mid-East,

Grimm is a top notch pilot.

Reed has been in love with Sue Storm, for years, even though she is about twelve to sixteen years his junior. She is also brilliant, and with degrees of her own, has become a valued associate, as well as Reed’s girlfriend.  Her brother, Johnny, a teenager, or in his early twenties, often hangs out at the lab, although his interests tend far more towards gals, and cars. He is an EXPERT driver. And despite his glibness, a SOLID CITIZEN.

Reed is well aware of the pioneering private space programs, but he also believes that they are not big enough, or soon enough. He wants to explore space NOW.

And at a secret base in Long Island, on a private estate, he’s been building a rocket, to take him and Ben and Sue INTO the space between the planets. He’s found a way to do it economically, which will have great implications for ALL of the Marvel universe, enabling The Avengers, and others to easily travel to the planets…

Reed doesn’t want Sue to risk her life, but she insists…  Johnny, an adventurer at heart, also wants to go.

In  a decision he may always regret, Reed decides to let his friends of years, go along.

After all, if he is trying to prove that space travel is safe, what better way than taking his “family.”

At the Long Island Estate, someone has tipped off the government.  The fencing around the camouflaged rocket base is surrounded by police, federal agents….

The government should know that Reed only has good intentions. He is a valued AMERICAN PATRIOT. But the authorities may not realize that the base is Richards’.

Richards sees all this on a special vieiwscreen in his home in the Baxter Building, where he has  his incredible base of operations — research labs,  living quarters, etc. — on floors of a skyscraper  in Manhattan.

Remember, now, Reed is in his early forties — think Gregory Peck in his prime, or Charlton Heston with a bit more humanity — and can afford to do ANYTHING. He CHOOSES a life of science, and trying to broaden its frontiers, and help humanity.

Ben Grimm wonders if with all that Reed already has, a life of EVERYTHING he wants at his command, if all this is really necessary?  Reed explains why it is, and Ben is ecstatic, because HE’S always wanted to go to space, as well!  And he’s going to “fly” the spacecraft,

There can be only one solution.

On the roof of the Baxter building, the Fantasticar is revealed, a hovercraft helicopter that can go almost anywhere. NO ONE knows that Reed and Ben have built this.

Johnny wonders if this thing will fly…

And Ben Grimm tells him, as long as HE’S flying it!

At the Estate, agents are still milling around, when the Fantasticar appears from the sky… 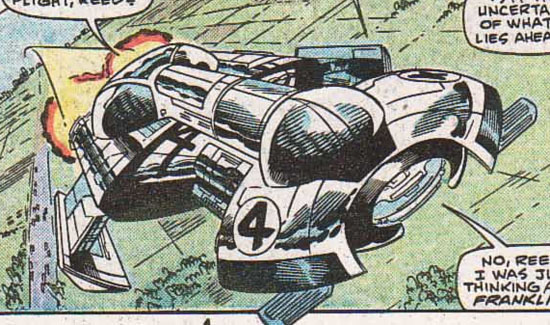 They start shooting at it. But it’s bullet proof

And suddenly, the Fantasticar veers off, because Reed and Ben are taking it to the TRUE location of their rocket base–

The 1950s/1960s style rocket on the launch pad, was only a diversion. The Fantasticar lands WELL away from the police and army. The Four make their way, to a clearing of trees in the compound. Reed presses a control he’s taken from his pocket, and super solid metal doors open in the ground, revealing a staircase…  They quickly descend, and the impregnable walls close behind them.  Through the lit, orangey corridor, the Four descend, as chaos continues above.

At the heart of the base, is a glorious SPACECRAFT, sleek, like Jack Kirby drew it in its prime, shining beautifully in the full lighting. The Four make their way to the ship’s entrance, and cockpit.

“We don’t want anyone to get hurt.”

On a loudspeaker system, Reed’s voice is heard outside, warning the crowd tp pull back to the road, that there is going to be a massive contained explosion, but no one will get hurt. But they most move beyond the perimeter. Suddenly, we see a SAFETY fence rising along the grounds. A secuirty officer in charge starts getting everyone behind the perimeter….

Someone among the authorities — perhaps more than one official — realizes that it’s Reed Richards, and feels far safer…

And, soon, the amazing craft lifts up to a gantry, and ABOVE THE GROUND glimmering just like in the moonlight of the original comics, the Fantastic Four’s rocket launches….

On their ascent, Reed asks Sue Storm to send the government their full trajectory, and plans (a process that due to high tech, happens immediately, of course).

Ben says it may be too late, nuclear warheads are already being aimed in their direction (from outerspace platforms?)

Reed says not to worry, their ship will soon be GONE!

In a military command base, a General, realizing it’s Reed Richards, decides to bet on Richards’ patriotism and all that he’s done for the world….  The weapons are called back.

Richards and Grimm and the Storms, are now beyond the Earth’s orbit!

There, somewhere,  a mysterious cloud, or nebula, or SOMETHING is encountered –

Cosmic rays, or something else?

And when the friends return to earth, they have gained their powers…

Meanwhile, on a viewscreen, in his castle in Latveria, a country somewhere in Europe, Victor Von Doom, hidden behind an iron mask, and cloak, watches the rocket climbing through the stratosphere, on his own, VERY futuristic, but also somehow medieval-looking, monitor.

He notes that Reed Richards, his old college roommate, has again succeeded….

Next, to the story’s McGuffin…

(Which could be particularly interesting, because maybe, in Reed’s debriefing with the government, he’s told that Von Doom is about to address the United Nations