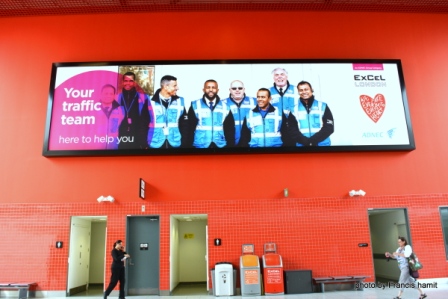 The ExCel is big and friendly, if you don’t mind walking.

By Francis Hamit: One of the notable aspects of the Dealers’ Zone at Loncon 3 was the number of “small press” publishers who took advantage of Loncon 3 to display and sell their books. Two big British publishers were also present, as well as a couple of University presses. Also, displaying their wares or cause were some British nonprofit organizations. 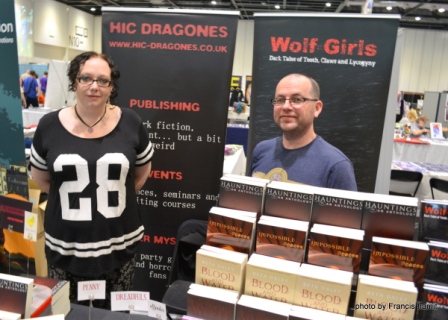 “Small press” is a term that avoids the curse of “self publishing”: generally condemned for its poor editing and execution. (The truth is that while some eager writers in their rush to get to market have failed to live up to the standards of traditional publishing, the majority of those at Loncon 3 avoided this self-defeating behaviour, and had product indistinguishable from the mainstream. Everyone uses short-run print-on-demand technology now.) Since Leigh and I have our own publishing company, we are sympathetic to small press entrepreneurs, and had we any science fiction titles, might have also had a table. Here are some photos taken on the last day. We are happy to report that everyone not only covered their costs but seemed to be happily in profit.

One young, pretty, and very smart scientist in the Fan Village said to me scornfully that 90% of self-publishing is crap, to which I replied with Theodore Sturgeon’s famous line, “My dear, 90% of everything is crap.” The high sales reported by small-press dealers indicates that this deplorable attitude is finally going away.

This is a quartly magazine – gearheartmag.com

www.dellavigna.com has SF in Italian and Latin (!)

Gillian Redfearn of Gollanz (left) was also a Program Participant

1 thought on “Loncon 3: A Stroll Through the Dealers’ Zone”