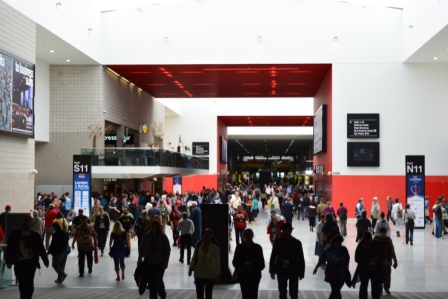 By Francis Hamit: With over 600 items available and no way to attend them all, I can only write about the few I saw myself. Those were interesting, and well prepared, by people with professional background. Effort was obviously expended by the organizers to provide geographical balance in the spirit of a “World” science fiction convention.

The panel “How Does Bookselling Shape The Genre We See” included Guest of Honor Malcolm Edwards. “It’s been ‘gloom and doom’ (in bookselling) since the 1970s,” Edwards said. The impact of e-books and the pricing policies of Amazon.com have driven many brick-and-mortar stores, including the Borders chain in the USA, to the wall or out of business entirely.

For all of that, publishers still rely upon early feedback from booksellers, communicated through reps, for feedback. Advanced Reading Copies (ARCs) are routinely sent, and the pre-publication orders influence decision-making. Early enthusiasm can make a best-seller. In some cases, the relationship is defined by money. Shelf allowances are routinely paid, as if books were simply another item in grocery stores (my local Ralphs’ is my local bookstore). There is another method, where the publisher tries to influence the buyers for the chains to gain larger initial orders (you can’t sell it if you don’t have it). Waterstone’s, a UK bookstore chain, has 330 shops, but normally only orders 250 copies of a new title. Per Malcolm Edwards, individual buyers have now become teams of buyers, who are very cautious, and tend not to order books by authors who are not recognized brands, at all. Management generally prohibits local managers from buying directly from local authors, because space is at a premium. Independent stores exert influence over their customers through word-of-mouth and hand-selling. Publishers traditionally made a lot of money on back-list books, because nobody wants to start with Volume 3 of a series. “The amount of space dedicated to a particular author in a store has been squeezed,” said Malcolm Edwards, “Shelf presence, having three books or more by one author, is needed to create buzz, or word-of-mouth.”

E-books and online discounts do have an impact, but customers still come in to read and find new books. Brick and mortar stores are still viable, because they offer more choices without being confusing due to massive amounts of data. However, less choice actually helps increase the volume of sales, and e-books sell better if they are also available in print editions. Publishers now prefer Trade Paperbacks because they have higher margins. Mass market paperbacks do not make as much money and are probably going away. A related panel was called “The Politics and Economics of Cover Art”. This drew a standing-room-only audience, and emphasized the role of design in appealing covers with the goal of getting a customer to actually pick up the book. (Social Science research indicates that if someone actually does this, the chances that the book will be sold are about 50/50; a sense of ownership is created even before the sale). Panelists agreed that in an ideal world, the design should match the content. Said one panelist, “A lot of covers do suck, and are gender-inappropriate and offensive (there are objections to the tits-and-ass approach, where it has nothing to do with the content and to ‘white washing’ or using an image of a white person when the protagonists are not white).” Another panelist said, “I have to ask, is this how I want my company to be represented, or my author represented?” While another pointed out, “We’re being a little irresponsible if we don’t acknowledge that the publisher’s job is sell a lot of books.” “Who reads the majority of books? Women! So why are we marketing to boys? We need to be very leery of boy-versus-girl marketing.” No covers were shown to back up these points. “We have a really closed group of illustrators who get most of the work; they are almost entirely male, there are not a lot of female illustrators doing this work, so we see the same guys over and over, and we only see their esthetics. Product consistency and on-time delivery are more important than innovation.” But as another panelist pointed out, if people weren’t buying the books, we wouldn’t have this problem. It’s driven by what people are buying, and we have no idea what works.” Two-thirds of books are sold in non-bookstore locations (such as grocery stores). They don’t want to give shelf space to anything that will not sell through. And very simply, small presses do not have the resources to access these channels. 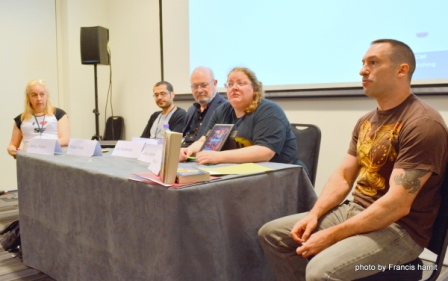 “Military Science Fiction” included Ashley Pollard (a nurse with military experience), Joe Haldeman (a Vietnam veteran who made his reputation with The Forever War, which was his MFA thesis, and is still in print forty years later), Robin Shah (from the Economics field with an interest in the military), and Jean Johnson (who has no military experience of her own but is extremely enthusiastic about the military), and the Moderator, Myke Cole (a Lieutenant in the US Coast Guard, who is writing a military fantasy series called “Shadow Ops”; Cole has served three tours in Iraq in Special Operations and is still on active duty).

Said Lt. Cole, “You do not have to serve in the military to have a military consciousness. Joining the military is a bit like being put in an orphanage. The genre has become a bit discontinuous, and strong male protagonists are the tradition. Readers have been really pleased to see more strong female protagonists. The military is as complicated as the larger society is, and reflects many of the same issues, and what is happening today in the real military is the change in the nature of casualties. While more lives are saved on the battlefield, there is a huge increase in the number of psychiatric casualties. Killing is not a fundamental human activity. Drone operators are getting PTSD, despite their remoteness from the battlefield. During the Cold War, we developed an addiction to high technology. We’re now in an age of insurgent warfare, with a renewed focus on Special Operations. That affects the kind of training I get.”

“Does Military Science Fiction need to change to remain relevant?” asked Ashley Pollard. “Physical Fitness is much less, because fewer people do hard manual labor, such as farming or (heavy) factory work, and in wars, it’s about breaking things and people. There is a cognitive dissonance, and the larger society gets about a minor amount of casualties, compared to previous wars. If the culture is unwilling to sacrifice people, then wars are likely to be lost.” (It becomes a matter of political will; this was why the Vietnam War was lost.) 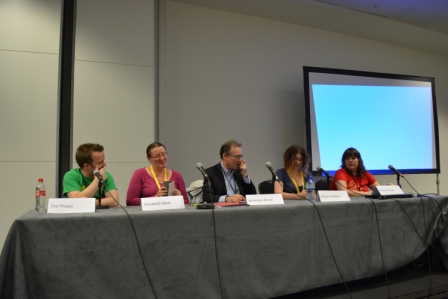 The “Spies We Still Love”, was moderated by Nicholas Whyte, who vaguely admitted to having some background in real life, and included Tim Phipps, American author Elizabeth Bear, UK publisher Gillian Redfearn, and German small-press publisher Stefanie Zurek. Whyte began with a trip down memory lane with television series from the 1960s, such as Mission Impossible and I Spy. Phipps said that Mission Impossible was a very tightly structured show that played espionage very very straight. Elizabeth Bear pointed out that, “What is interesting is the caper aspect of that show, and how are they going to pull that off? Whereas The Avenger” and The Man from U.N.C.L.E. are parodies, making fun of James Bond.” The John LeCarre novel, and then mini-series, Tinker, Tailor, Soldier, Spy was groundbreaking. Tim Phipps said, “It takes State conflict, and makes it very personal.” Which led to the series known as Spooks in the UK, and as MI5 in the US. Phipps also really likes Person of Interest which has as a protagonist a super-computer, aided by a billionaire and an extremely burned-out CIA agent. Other series were discussed, but as yet it seems that none of the panelists have yet seen the new groundbreaking series about deep-cover KGB operatives during the Reagan administration called The Americans.