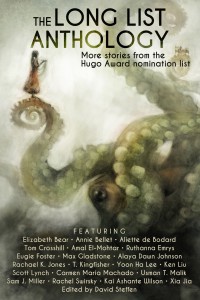 The Long List Anthology is now available in print, ebook, and audiobook form. Editor David Steffen’s book, funded by a Kickstarter appeal, collects 21 works of short fiction that received enough nominations for the Hugo Award to be named in the Sasquan committee’s report of voting statistics. Nine would have been finalists but for the efforts of the Sad Puppies.

The cover art is by past Hugo-winning artist Galen Dara.  Audiobook production is by Skyboat Media.

Audiobook (with 12 of the stories plus a Chinese language version of “Spring Festival”): Downpour; Amazon; Audible; iTunes.