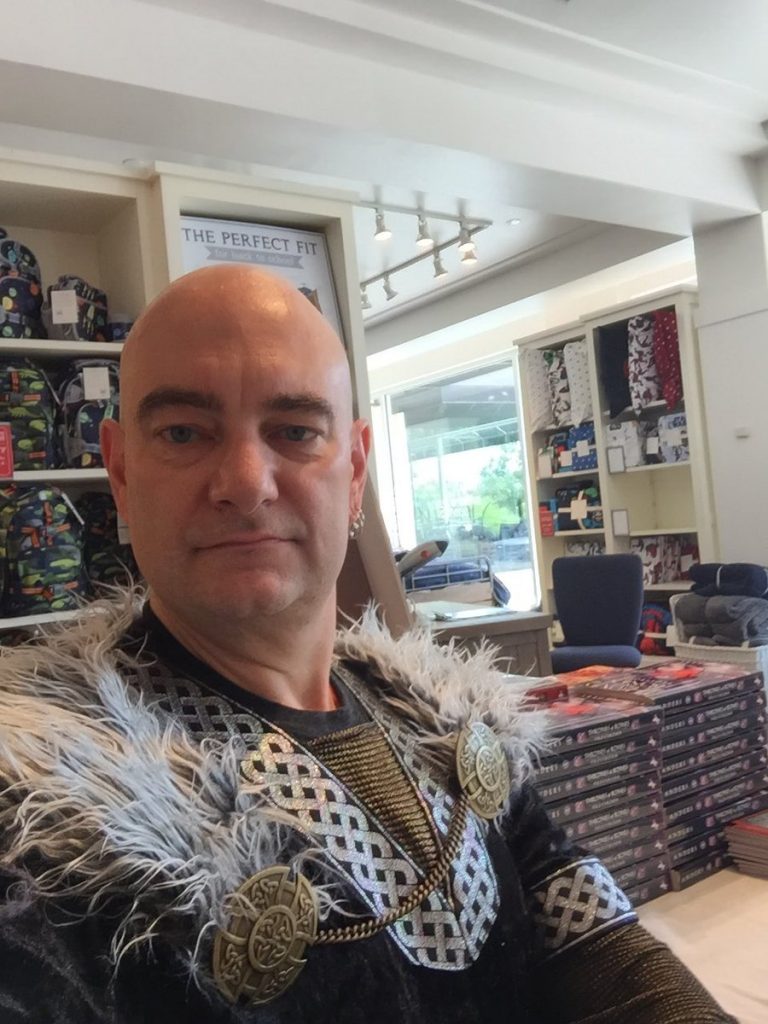 By Carl Slaughter: Lou Anders started as a Star Trek/Babylon 5 journalist. He wrote over 500 magazine articles. This was followed by the book, The Making of Star Trek: First Contact. Over a period of 10 years, he forged Pyr into one of the most distinguished speculative fiction publishers. Pyr was nominated for a horde of Hugo and Chesley nominations. Plus numerous John Campbell, Arthur Clarke, Philip Dick, British Science Fiction, World Fantasy, and Locus Award nominations.

Then he transitioned into fulltime writing with his Thrones and Bones middle grade series. Anders traveled to Norway to research Norse mythology. The series received positive reviews from Publishers Weekly, Kirkus, Booklist, and School Library Journal. Goodreads reviews have been overwhelmingly 4 and 5 star. Frostborn came out in 2014, Nightborn came out in 2015, and Skyborn will be out in September. The series includes the Thrones and Bones board game. 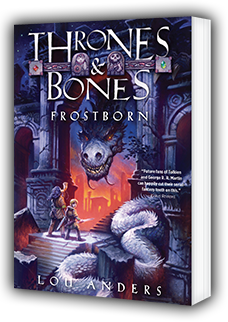 Meet Karn. He is destined to take over the family farm in Norrøngard. His only problem? He’d rather be playing the board game Thrones and Bones.

Enter Thianna. Half human, half frost giantess. She’s too tall to blend in with other humans but too short to be taken seriously as a giant.

When family intrigues force Karn and Thianna to flee into the wilderness, they have to keep their sense of humor and their wits about them. But survival can be challenging when you’re being chased by a 1,500-year-old dragon, Helltoppr the undead warrior and his undead minions, an evil uncle, wyverns, and an assortment of trolls and giants.

Listeners will embark on a sweeping epic fantasy as they join Karn and Thianna on a voyage of discovery. Antics and hair-raising escapades abound in this fantasy adventure as the two forge a friendship and journey to unknown territory. Their plan: To save their families from harm.

Debut novelist Lou Anders has created a rich world of over twenty-five countries inhabited by Karn, Thianna, and an array of fantastical creatures, as well as the Thrones and Bones board game.

Bonus PDF: Includes a glossary, “Song of Helltroppr” lyrics, and rules for the Thrones and Bones board game. 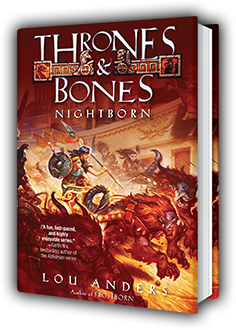 For fans of Lloyd Alexander and Brandon Mull comes Book 2 in the acclaimed Thrones and Bones fantasy-adventure trilogy that began with Frostborn.

Karn Korlundsson is a gamer. Not a riddle solver. But in order to rescue his best friend, Thianna Frostborn, he will need to travel to the faraway city of Castlebriar (by wyvern), learn how to play a new board game called Charioteers (not a problem), decipher the Riddle of the Horn, and tangle with mysterious elves.

Meet Desstra. She’s in training to join the Underhand—the elite agents of the dark elves. When she crosses paths with Karn, she is not all that she appears to be.

Everyone is chasing after the horn of Osius, an ancient artifact with the power to change the world. The lengths to which Karn will go in the name of friendship will be sorely tested. Who knew that solving a riddle could be so deadly? 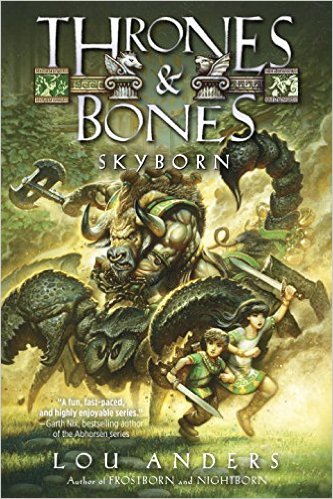 For fans of Lloyd Alexander and Brandon Mull comes the epic conclusion to the acclaimed Thrones and Bones fantasy-adventure trilogy that began with Frostborn.

Find the Horn. Free the City.

The chase continues for the legendary Horns of Osius. Thianna and Karn’s quest to retrieve the horns from those who wish to abuse their power takes them to Thica, an ancient land where two tyrant queens reign supreme and where years earlier Thianna’s mother was labeled a traitor. Soon the two heroes are caught up in an epic battle for control of the kingdom, one that puts their very lives at stake. The only way to overthrow the queens is to beat them at their own game. But with an entire empire against them, how can Karn and Thianna hope to compete—or better yet, survive?