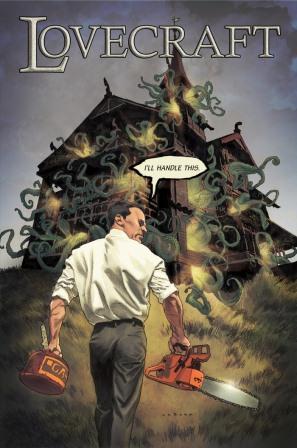 There is no army so powerful as an idea whose time has come, and apparently the idea of making H.P. Lovecraft the protagonist of his own comic is that idea. A week ago, while I was writing about the late Larry Latham’s Lovecraft Is Missing, the creators of Lovecraft: The Blasphemously Large First Issue were already reaching their initial Kickstarter funding goal.

Lovecraft is a dirty, gritty story about magick, monsters and the occult. It takes place in a modern-day world where H.P. Lovecraft the writer never existed but where all the horrors he wrote about are real. In this story, the man named Lovecraft is the world’s foremost magician and alchemist who maintains a secret library of forbidden knowledge which includes books like the Necronomicon.

Lovecraft is a classic Byronic antihero: “Mad, bad, and dangerous to know.” He functions as the semi-reluctant guardian of mankind, one of the few who can traffic with occult forces without becoming (totally) corrupted by them. In his world, magicians are a secret culture within the culture who vie for power and knowledge, leading to feuds and wars that can unleash unspeakable terrors. When they do, Lovecraft is the guy who cleans things up.

Supporters found this idea so appealing they pledged 130% of the target amount in the first 36 hours. Now Engler and company have added a list of stretch goals, enhancements that will be added to the issue as money allows. The fund drive lasts until November 25.

Engler’s Lovecraft has a supporting cast that includes the resurrected John Dee, two of Aleister Crowley’s great-grandchildren, and Nyarlathotep the Crawling Chaos — who sows disorder and confusion wherever it goes but is neither good or evil, and is as likely to seemingly help these characters as harm them.