Over 40 folks in steampunk attire planning to enjoy the merry-go-round at Carlsbad’s Westfield Plaza were turned away by mall security on February 9 reports the San Diego Reader. Security told them they were breaking a rule in the mall’s code of conduct against “wearing apparel that disguises, obscures or conceals the face.” 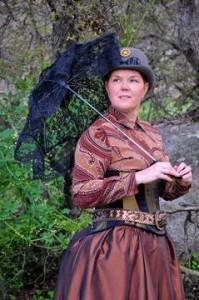 Spokespersons for the group denied the outfits they had on did any such thing.

Lisa Vaca, one of those costumed, stated, “Since none of us had any part of our faces obscured, we respectfully pointed it out to the three security guards, and then their new reason for asking us to leave was a mix of ‘this is private property so we can refuse entrance to anyone,’ and ‘a group of this number needs to call ahead first to get permission,’ and, our favorite, ‘recently we had a big problem with a vampire group who showed up here….’

Vaca further went on to state, “When they told us to leave, they didn’t even give us the option to ‘Please remove your hats and other costume-type items if you want to stay.’ They just walked up to a couple of our wonderfully dressed women and said, ‘You have to leave!’” 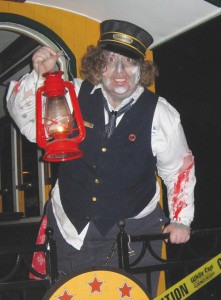 Kim Keeline as Zombie Conductor in 2012.

Sandra Deakins told reporter Mercy Baron she felt “corralled” and given the “ushering effect.” Three Oceanside police patrol cars and three police officers responding to a call from security stood by as the group streamed out of the mall.

Steampunk Kim Keeline said, “We were told it was to keep out the riffraff. In various conversations with the security and the police, this was variously described as gangs, people in vampire costumes, a group that tried to come ride the carousel last week while wearing horsehead masks, and other such riffraff.”

After their harrowing experience the group reconvened at Doctor Watson’s Steampunk Odditorium in Oceanside. 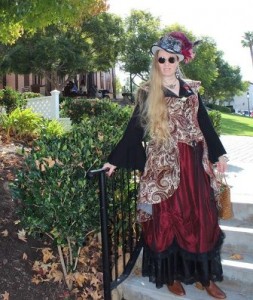