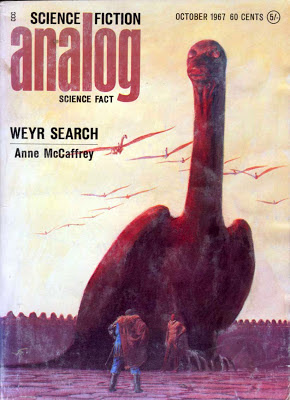 Anne McCaffrey’s novella Weyr Search was published in the October 1967 issue of Analog and around the time it was hitting the newsstands she had an opportunity to visit John W. Campbell in his office and see the original Schoenherr illustrations.  She was so captivated by his interpretation of her dragons that she wrote the artist a fan letter, which his son Ian has reproduced on his blog, accompanied by scans of the images.

But man, those are mighty appealing dragons. Particularly, especially, and triumphantly, the one in which Lessa is enclosed in Mnementh’s talons. Oh, that, I die a little over. How HOW did you manage to convey that foolish bronze’s tender regard and lack of menace in black and white, no less. Superb. Honest, I nearly cried in front of John and Miss Tarrant…which at my age would be a little the other side of enough. But the sketch was so much, so very much what I had imagined in my mind for the scene, I’d swear you were a telepath yourself.

The following year Weyr Search became the first story written by a woman to win the Hugo Award.