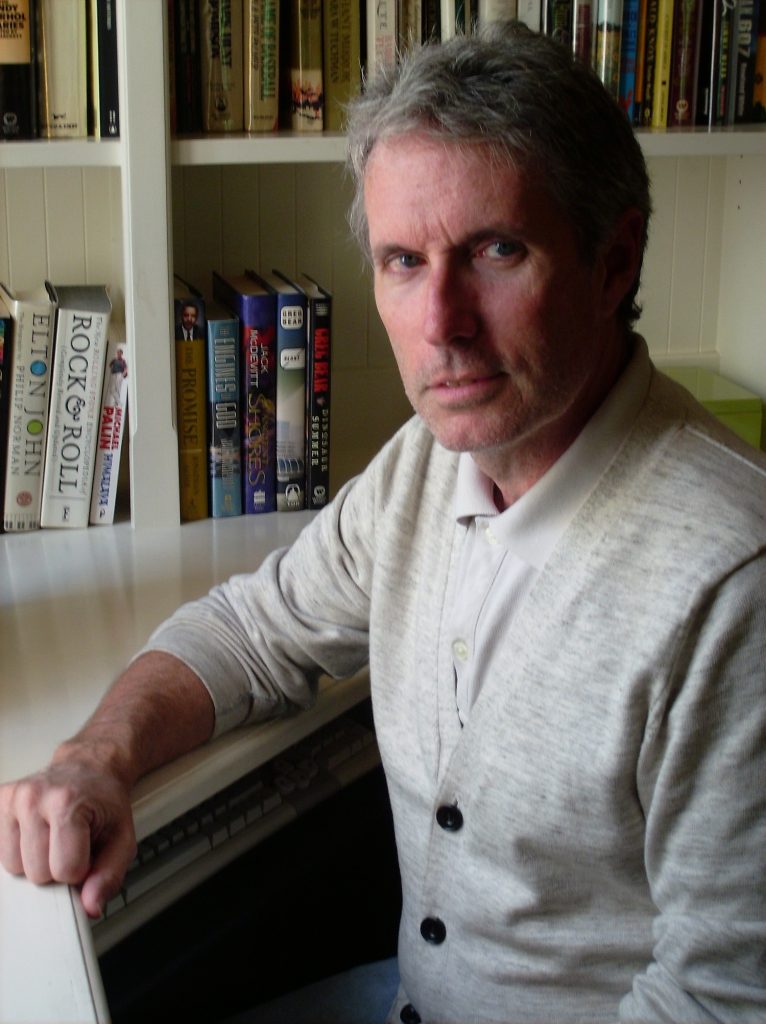 By Carl Slaughter: Michael Cassutt produces and writes for a different kind of zombie story. SyFy’s Z Nation is a post-apocalyptic science-humor show. He has 6 nonfiction books about space exploration and has been interviewed by Discovery Channel and History Channel on this topic.  He teaches television writing at USC.

CARL SLAUGHTER: Where does Z Nation fit into the zombie genre television landscape?

MICHAEL CASSUTT: It depends on which scale you’re using – if judging by how grim the world is, you would put The Walking Dead at one end with Z Nation at the opposite end. Both of us are exploring life in the Zombie Apocalypse, but our characters frequently comment on the absurdity of their situation. (And they are also actively trying to take action to improve it.)

CS: What is the appeal of the zombie genre?

MC: In some sense, it’s the same appeal that so many Cold War-era post-apocalyptic films of the 1950s and 1960s had, or classic SF like Earth Abides: it gives the viewer or reader a chance to play in a world without rules, where the old standards and restrictions no longer apply. In the Zombie Apocalypse, you get to be a badass survivor and killer, something you are not likely to be in real life. 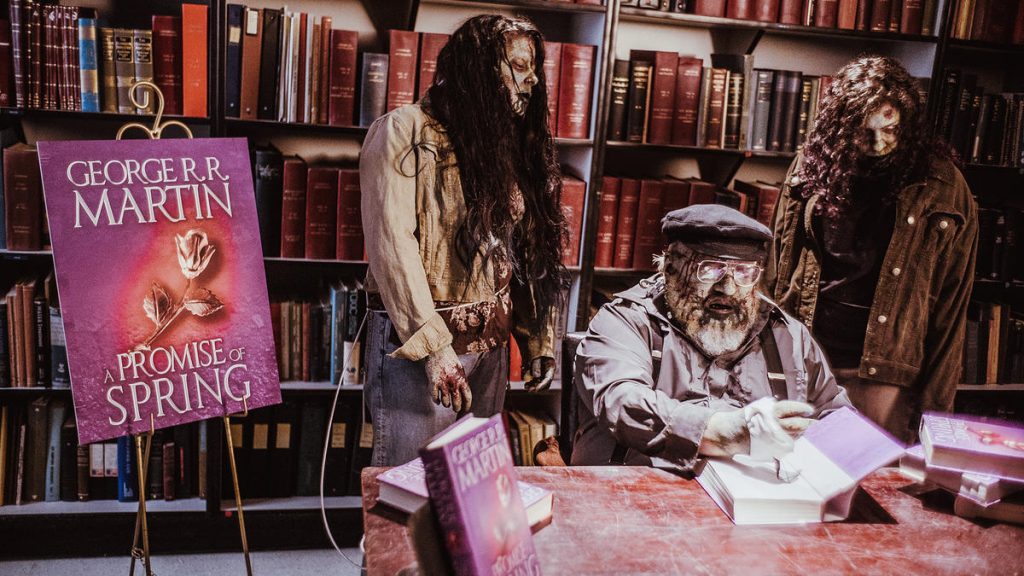 MC: In television – and this has been the case for something like thirty years – a producer is almost always a script writer. And as a writer, I am part of a staff that can number as many as eight individuals who meet for 2-3 months and workshop – in TV we say “break” – every episode of the forthcoming season.

Then we go off to write as individuals; I typically write two episodes per season.

Our second drafts go to Karl Schaefer, the showrunner, who does his pass, sometimes light, sometimes heavy. Karl’s draft serves as the basis for prep and production, and in most cases a writer like me comes back into the episode at that point.

We have several writers on ZN who are also directors: Dan Merchant, Jodi Binstock, Abram Cox and Jen Derwingson. When they get their Karl draft, they not only deal with the material as writers, but as directors, too.

We all have input into post-production to some degree.

CS: What other speculative fiction television shows have you been involved with and in what capacity?

MC: At one time or another, I’ve adapted novels or short stories by Clifford Simak, Philip Jose Farmer, John Varley, Arthur C. Clarke, Clarke & Stephen Baxter, and Robert A. Heinlein.  None of these have ever been produced, though it doesn’t stop me from trying.

CS: What information about space flight do your nonfiction books contain?

MC: My space-related non-fiction books – six of them, if you count the forthcoming Astronaut Maker (which may get a new title) – deal with the human side of that world. Who gets to go into space? What did he or she do?  What was it like? I am less interested in, or capable of evaluating, technical advances in rocketry, though I follow them. 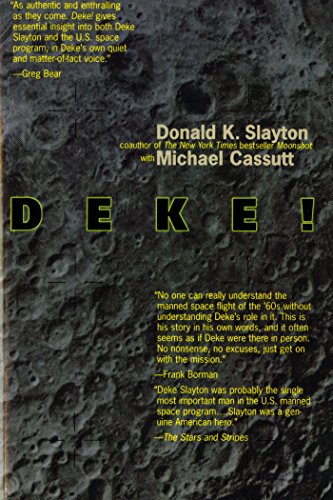 MC: This book, which has been in the works for five years and consumed all of my non-TV writing time for the last couple, focuses on one individual who had a 37-year career at NASA, rising from systems engineer to director of the Johnson Space Center, where he was for several years the most powerful individual in the history of human space flight, leading development of the International Space Station and also being in charge of the Space Shuttle.

He was a USAF helicopter pilot who became an engineer on the long-forgotten Dyna-Soar spaceplane program, then was assigned to NASA to work on Apollo. He was deeply involved in the design and development of the Apollo command module – was with the Apollo 1 astronauts at the Cape the night before they died in the tragic fire on the launch pad. Was part of the team that had to disassemble the charred spacecraft.

In the 1970s he became the NASA official in charge of astronaut selection – recruiting the first women and minorities into the astronaut team. He also assigned the crews.

After some career setbacks following the Challenger disaster (he was the NASA official who picked that crew, and two of those who were killed were his best friends on the astronaut team), he sort of rose from the ashes to that position at JSC.

He is a brilliant, fascinating man with priceless stories of Apollo, Shuttle, the Russians, and ISS.

CS:Is there an overlap between your trilogy and your nonfiction books?

MC: My non-fiction work on spaceflight was the reason David Goyer asked me to collaborate on Heaven’s Shadow. He had a notion for a near-future space adventure, and figured it was easier to bring me into the project than to spend a lot of time trying to research the subject.  (We had known each other for fifteen years by that time, so the offer wasn’t entirely out of nowhere.)

CS: Same question for your novels and short stories.

MC: Three of my novels – Missing Man, Red Moon, and Tango Moment – came directly out of my research into the space program . . . its history and especially figures like Deke Slayton.  The first Heaven’s book, Heaven’s Shadow, incorporates that research, too. But the next two books don’t – they are pure SF, as was my first novel, The Star Country. 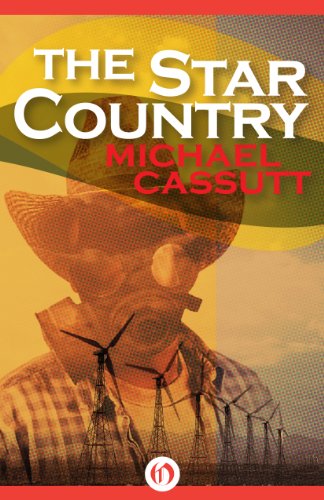 A few of my short stories have dealt with space flight – “The Last Apostle” from Asimov’s is my favorite. “The Longer Voyage”, published in F&SF in 1994, was apparently too realistic for some readers. One wrote, “If I thought that Michael Cassutt’s vision of future interstellar travel was true, I’d die” – or words to that effect.

CS: What did you do for Discovery?

MC: For Discovery and History Channel I have made half a dozen appearances in space-related documentaries. Most of these – especially the most recent, Secret Space Escapes – deal with history.  But in Universe: Space Weapons [2009], I am on camera a lot, hitting golf balls and taking part in the operation of a trebuchet.

CS: What do you tell your USC students?

MC: I teach television drama writing and, every few years, do a survey lecture about the various types of SF, fantasy and horror series. For writing students, I try to give them tools and strategies for writing effective drama – not just the basic challenge of creating interesting characters, but dealing with settings and structures and season-long arcs.

It’s as educational for me as it is for them, perhaps more so.

CS: Any advice for print authors who want to break into screen?

You have to have a book agent, and your book agent must have a relationship with some TV agency.  Then you can write spec pilot scripts and get them to that TV agent.

That’s the only pro-active step you can take that has a chance of working – unless you happen to have some friend or associate who is already a successful TV agent.

Other than that, you must wait for some producer to discover your print work – and option it. Then you can insist that you be involved in the adapation.

CS: How hard is it to break into showrunning?

MC: If you are a senior writer-producer on the staff of a successful TV series, it’s not difficult at all: you will either move up when your original showrunner burns out, or you will sell your own series and move off to do that.

If you aren’t a senior writer-producer, it’s almost impossible to become a showrunner. You might get a shot if you are an acclaimed writer from, say, feature films, and a network or channel simply wants to work with you.

CS: What’s on the horizon for Z Nation?

MC: All I can or should say, since we have surprises in store, is that in Season 3 ZN gets more science-fictional.

CS: What’s on the horizon for Michael Cassutt?

MC: At the moment I’m completing Astronaut Maker for delivery to Chicago Review Press. When that’s done, I’m going back to writing short fiction and eventually a new novel.

As for TV – who knows? If there’s a Season 4 of ZN I’m eager to be involved. I also have a few projects of my own that I am pursuing.