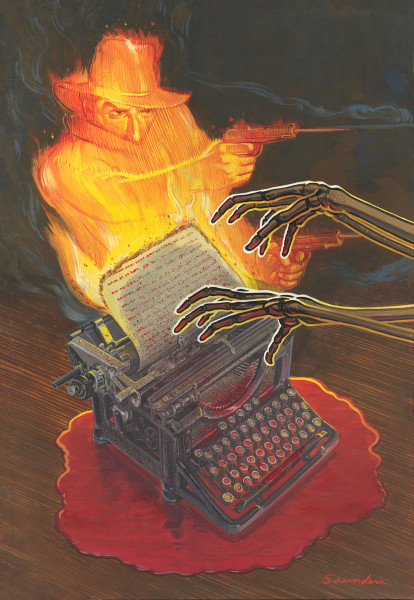 Stephen T. Miller is the winner of the 2015 Munsey Award given by Pulpfest to a person who has worked for the betterment of the pulp community. Miller was selected in a vote of all living Lamont, Munsey, and Rusty Award winners (awards also given by Pulpfest).

The award is a fine art print of the David Saunders painting above.

Stephen T. Miller has been helping to index the magazines for years. Along with Michael Cook, he compiled Garland Publishing’s MYSTERY, DETECTIVE, AND ESPIONAGE FICTION: A CHECKLIST OF FICTION IN U.S. PULP MAGAZINES, 1915-1974, an exceptional resource for collectors of not only detective pulps, but also hero and adventure magazines. With Phil Stephensen-Payne and William G. Contento, Stephen recently revised this classic index, issued on CD-ROM by Locus Press as CRIME, MYSTERY AND GANGSTER FICTION MAGAZINE INDEX, 1915-2010. Also with Bill Contento, Steve compiled SCIENCE FICTION, FANTASY, AND WEIRD FICTION MAGAZINE INDEX, 1890-2008, a guide to more than 900 different magazines, again published on CD-ROM by Locus Press. Additionally, Steve has helped with much pulp-related research, sharing his knowledge as well as his collection with researchers.

Nominations are now being accepted for the 2016 Munsey and/or Rusty Awards. Send the name and a brief paragraph describing why you feel that person should be honored to Mike Chomko, 2217 W. Fairview Street, Allentown, PA 18104-6542 or to mike@pulpfest.com. Those who have already won a Lamont, Munsey, or Rusty Award are not eligible. The deadline for nominations is May 31, 2016. Additional details are here.