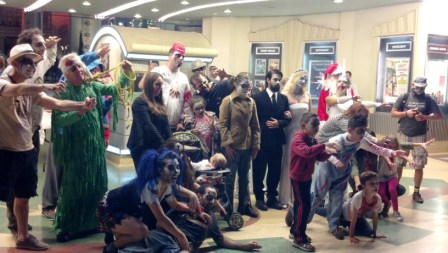 Here’s a snapshot of the line waiting to get into Abbott and Costello Meet Frankenstein at the Alex Theatre in Glendale, CA on October 25. Tough crowd!

John King Tarpinian was on hand not just to see the movie, but to flash his replica of the Dracula ring Lugosi wore in the film. You all know how hard it is to find social occasions to wear your finery. 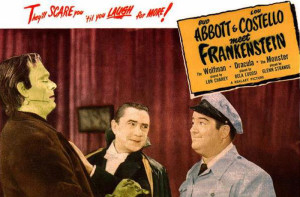 Bud Abbott and Lou Costello join forces with Universal’s menagerie of famous monsters… a perfect blending of classic comedy and terror. The boys were never funnier, combining verbal routines with their best slapstick gags. A top-notch supporting cast plays it absolutely straight, with Bela Lugosi as Dracula for only the second time, Lon Chaney Jr. making his full moon change into The Wolf Man, and Glenn Strange stalking the boys as Frankenstein’s Monster. Even Vincent Price gets a cameo as The Invisible man. This top grosser for Universal still holds all its charm.

4 thoughts on “Monstrous Crowd at the Alex”