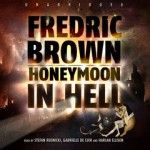 Harlan Ellison can be heard in Skyboat Media’s audiobook of Fredric Brown’s Honeymoon in Hell, a collection of Brown’s short stories produced in 1958. Stefan Rudnicki and Gabrielle de Cuir round out the cast voicing an array of tales promised to frighten and delight. 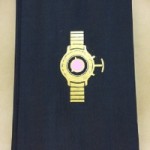 And Subterranean Press is accepting $150 a copy to preorder Ellison’s unproduced script Flintlock, intended to have been the third Derek Flint spy movie, following Our Man Flint (1965) and In Like Flint (1967). With the 2013 release of the Flint films in a limited edition Blu-ray format we are told through bonus material that a Flint script was written for James Coburn by Harlan Ellison in 1972 called Flintlock, but never produced.

The numbered edition is bound in black silk and has Derek Flint’s famous wrist-watch hand-stamped in gold on the front board.

4 thoughts on “More Ellison Product Rolling Off the Line”