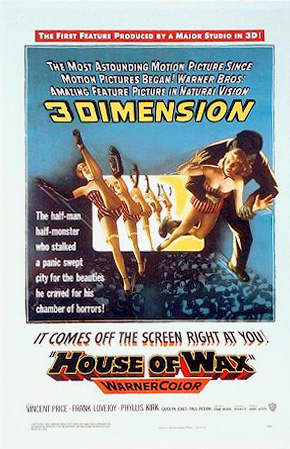 Three fantasy and horror films are among the 25 films selected in 2014 by the Library of Congress to be preserved as part of the National Film Registry, House of Wax (1953), Rosemary’s Baby (1968) and Willy Wonka and the Chocolate Factory (1971).

Also on the list is the Western, Rio Bravo (1959), whose screenplay was co-written by Leigh Brackett. Called the “Queen of Space Opera” during the pulp era, she became famous for her work on The Empire Strikes Back screenplay.

House of Wax, the first full-length 3-D film from a major U.S. studio, stars Vincent Price. Rosemary’s Baby was based on the novel by Ira Levin and directed by Roman Polanski.

Other selections of interest to fans for various reasons:

[Thanks to Mark Blackman for the story.]