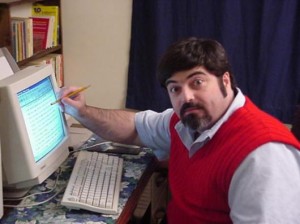 Nick Pollotta died April 13 after a long bout with cancer. The author of 54 published novels, Pollotta was best known for his humorous sf – Illegal Aliens (with Phil Foglio) and Bureau 13. Much of his pro work did not appear under his own name, but under the house names “James Axler” and “Don Pendelton.”

He lived in Chicago with his wife, Melissa.

Years ago, when he resided in North Jersey and in Philadelphia, Pollotta was a force in the Philadelphia in ’86 Worldcon bid. He helped publicize it with a series of comedy tape recordings about Phil A. Delphia, fannish Secret Agent 86, played at conventions around the country.

Indeed, he had recently created a series of YouTube videos from the old sketches, adding images to the scratchy soundtracks.

[Thanks to Michael Brian Bentley for the story.]