Bad news for fans buying the British release of Marvel’s The Avengers on DVD/Blu-Ray. Variety reports the U.K. version lacks Joss Whedon’s director’s commentary and other significant extras. And there’s an alternate edit from the U.K. theatrical version.

A spokesperson for Disney U.K. Home Entertainment said Whedon’s commentary was finished too late for the U.K. manufacturing deadline, which came a month earlier than the U.S. pressing. The U.K. disc was released September 17, while the U.S. release isn’t until September 25.

The alternate edit involves the scene where Loki kills Agent Coulson – in the theatrical release Loki’s spear is seen protruding from the agent’s chest, but not in the UK disc version.

The action sequences are similar to those in other recent films passed at ’12’ which feature the same superhero characters. Although there are some strong blows and impacts there is little detail in the violence, which is highly stylised. Furthermore, the involvement of fantastical superheroes means that there is no real danger of the combat resulting in serious injury or death. Much of the violence is directed at an army of aliens that have no human characteristics. The injuries sustained by the aliens are very unreal, with small blue splashes representing ‘blood’ when they are blasted by weapons. The BBFC’s Guidelines at ’12A’/’12’ state ‘Moderate violence is allowed but should not dwell on detail. There should be no emphasis on injuries or blood, but occasional gory moments may be permitted if justified by the context’.

So, definitely no spears sticking through people if you want the age “12” rating. When I was younger I’d have ended this with a snarky line about how things have changed since the days when Britons commissioned Edward Armitage to celebrate violent conflict in paintings. However, now that I have a 10-year-old daughter, if they cut all the cinematic violence I’m unwilling for her to see The Avengers would amount to nothing more than a nice 10-minute travelogue about New York. 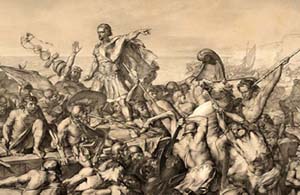