By Ahrvid Engholm: Last fall saw the beginning of the Fall of – or at least serious problems for – the literary influential Swedish Academy, the body deciding the Nobel Prize in Literature. This Prize has earlier been awarded to writers of fantastic literature (at least partly) like Doris Lessing, Jose Saramago, Maria Vargas Llosa, Elfride Jelinek, Gunther Grass, Harry Martinson and others.

On November 21, 18 women appeared in the big morning daily Dagens Nyheter, accusing a culture club organiser of serious sexual harassment, a man named Jean-Claude Arnault. This club had tight connections to the Swedish Academy: it received grants from it, Mr Arnault is married to Academy member Katarina Frostenson and Academy members were often appearing on this club. [If you run the article “18 kvinnor: Kulturprofil har utsatt oss för övergrepp” through Google Translate, it is very readable English.]

The Permanent Secretary – the Academy’s spokesperson and executive officer – Sara Danius commissioned a law firm to investigate the situation. The scandal soon grew. Frostenson was suspected of having leaked Nobel Prize results in advance, which you can bet money on (strange “movements” of those odds have been observed). The scandal also got momentum from the so called #Metoo events.
When the law firm report recently arrived last week – things exploded!

The report concluded e.g. that it was likely that Frostenson had leaked Nobel Prize winners in advance
and that she was a partner in a company in connection to the culture club receiving money. Both things are of course against the Academy rules.

The Academy last Thursday (they meet every Thursday) held a vote about sacking Frostenson due to these breaches, with negative result. Three members of the Academy – Kjell Espmark, Klas Östergren, Peter Englund – next day announced they quit in protest. You sit in the Academy “for life” and can’t formally resign, but you can withdraw working for it. Two members already do, for unconnected old reasons, so the Academy of 18 is now down to 13 working members. Member Sara Stridsberg says she’s considering withdrawing from the Academy, which would make it only 12 working members.

And if they become less than 12 on their sessions, they can’t vote to select new members! All according to the Academy statues, written in 1785 by the then-king Gustaf III, who was also the founder. If Stridsberg decides to call it quits and one more leave it will be extremely serious.

Kjell Espmark for instance motivated his withdrawal with “Integrity is the very soul of the Academy. When Leading voices within the Academy put friendship and other irrelevant considerations before this integrity – then I can no longer take part.” Peter Englund bashed the Academy for “decisions taken I don’t believe in and can’t defend” and Klas Östergren talks about a “betrayal towards the Academy, its founder and it’s High Protector…I’m leaving the game, I’m out of the game”.

Eight voting against an Exclusion Act (no connection to Nycon 1939…) wrote in the daily Svenska Dagbladet April 9th (see the Google Translate version here): “By excluding Katarina Frostenson, the Academy would have issued an extrajudicial punishment, which in its entirety would have exceeded a never-so-called legal judgement, a penalty without appeal or grace.” Member Per Wästberg writes in the same newspaper that he voted for exclusion, but unlike the three quitters he choose to stay in the Academy for the time being.

Permanent Secretary Danius, who has worked for exclusion and has the support of the renegades, was called to the Swedish king Carl XVI Gustaf Sunday April 8th, since he is High Protector of the academy. On the table is to change the statutes to allow academy members to resign entirely, so new members can be elected. (The Swedish constitutional monarch has only ceremonial powers, but maybe he has the power to approve of changing statutes of what is formally a Royal Academy. He is the successor to the founder, after all.) After the meeting with Sara Danius the King made a rare appearance for the press and said they “were working towards a solution and hope to do something that will be for the best, for all involved”. We’ll see. What will her supporters do if Frostenson is sacked?

The law firm’s report also concluded that the culture club Frostenson had interests in had paid wages under the table and broken tax and similar laws. They recommended to turn this over to the police. As for sexual harassment no Academy member had personally seen any, but they had heard rumours and stories about it and seen “unsuitable behaviour”.

There are certainly more exciting news to follow. Swedish newspapers are full of front page headlines, and media abroad also has extensive coverage – probably more than for the literary Nobel Prize itself! The Nobel Prize could be in danger when prominent members leave and the work-flow of the institution becomes poisoned and disrupted. Kjell Espmark was for instance the chairman of the Academy’s Nobel Committee.

As we all enjoy having our popcorn when we sit by the ringside, as the slugging goes on in the World of Fine Arts, it’s interesting to note how the price of corn has risen. Zoom in Dec 2017 to early April 2018, price is up from ca USD3.45 to USD3.90 per bushel: http://www.macrotrends.net/2532/corn-prices-historical-chart-data
Not that we can be certain it has with the turmoil in the Swedish Academy to do…but grab your popcorn as Nobel becomes ignoble.

Note: An onging joke from Yours Truly is that the ficticious, fannish poet (a serious Vogon challenger) Comet-Johan Bensin jr every year believes he’ll be the next Nobel Prize laureate…maybe he stands a chance now! 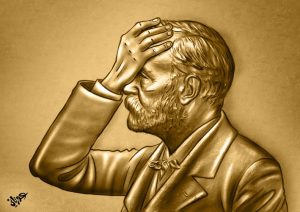 50 thoughts on “Nobel Becomes Ignoble or, The Popcorn Report”