By Mark L. Blackman: On the evening of Tuesday, December 2 the New York Review of Science Fiction Readings Series celebrated the December Holidays Season by continuing its tradition (its seventh commemoration) of “Family Night” with one of its favorite families, Ellen Kushner and Delia Sherman (for their sixth December happening). Also in keeping with custom, their reading was guest-hosted once more by the NYRSF Reading Series’ third curator (longtime attendees know who). In a departure, though, the event was held for the second time at the Commons Brooklyn, an event-hosting space a manageable hike from the Barclays Center, rather than at its usual venue, the SoHo Gallery for Digital Art. (At least one attendee showed up instead at the Gallery.)

The Reading Series’ executive curator Jim Freund, host of WBAI-FM’s Hour of the Wolf radio program on sf and fantasy (which broadcasts and streams every Wednesday night/Thursday morning from 1:30-3:00 am), as well as host of the Hugo-winning Lightspeed Magazine Podcast, welcomed all and announced that the Series will return to the SGDA on Tuesday, January 6, 2015, presenting Sarah Pinsker and Daniel José Older. Future readings are likely to revisit the Commons; the building, incidentally, houses the management of WBAI and is expected to become the broadcast space early next year. Freund turned hosting duties over to the guest-curator, who introduced the evening’s first reader. 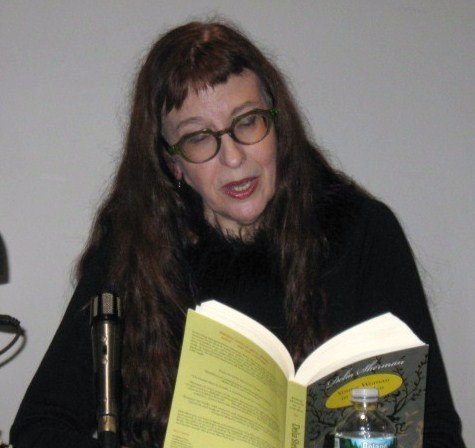 Delia Sherman is author of the Prometheus and Andre Norton Award-winning The Freedom Maze (from which she has read at previous NYRSF Readings), a time-travel historical set in antebellum Louisiana, as well as other stories and novels for both younger readers and adults, including Through a Brazen Mirror, The Porcelain Dove, The Fall of the Kings (with Ellen Kushner), Changeling and The Magic Mirror of the Mermaid Queen. The selection she shared, “Sacred Harp,” originally was published in Horns of Elfland (which she co-edited) and appears in her recent collection of short fiction, Young Woman in a Garden (despite the title it is decidedly not Young Adult), which made Publishers Weekly’s list of Best SF of 2014. The story is about a sacred harp or shape note choir, centering on Gretchen, an unsympathetic narrator (not usual for Sherman) who, frustratingly and increasingly pissed-off, leads her singers in hymns until, miraculously, the earthly meets the heavenly. The reading evoked a number of chuckles and made the audience want to hear the music. For those unfamiliar with shape note singing, Kushner stepped in to lead a chorus of “Babylon Has Fallen.” In a question-and-answer, Sherman replied that she does not write while listening to music, though ambient noise is ok and she has written in cafés. In contrast, Kushner writes in silence, or to listening to music whose words she doesn’t understand, and “she does not like to write in cafés.” Sherman noted that she had to teach herself how to write YA (Young Adult). “I don’t have an inner teenager. I have an inner 10-year-old and an inner 25-year-old.”

After a short recess, during which a raffle was held for a copy of the audiobook of The Freedom Maze and the manuscript from which Ellen Kushner would be reading, Wolf Smith introduced the second reader of the evening. 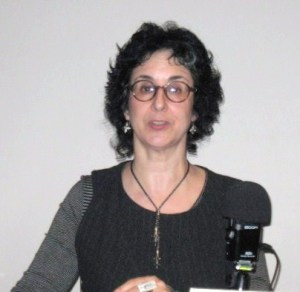 Ellen Kushner is an award-winning novelist (Thomas the Rhymer), editor (she recently co-edited Welcome to Bordertown), audiobook performer (her audiobook of Swordspoint, which she narrated, won both a 2012 Audie and Audiofile Earphones Award), klezmer devotee (The Golden Dreydl: a Klezmer “Nutcracker”), co-writer of the historical/feminist/magic realist/shtetl radio musical drama The Witches of Lublin, and public radio personality (longtime host of the public radio show Sound & Spirit); additionally, she recently served as guest host for Fantasy Magazine‘s Women Destroy Fantasy podcasts.

Notably, she is also the creator of the “mannerpunk” cult novel Swordspoint, and its follow-ups the Nebula Award-nominated The Privilege of the Sword, The Fall of the Kings (as noted, written with Delia Sherman) and related short stories; her offering was from the next novel in the series, still a work in progress, tentatively titled City Year. (The term refers to a ritual of highborn young ladies, and, she revealed, a source was a guide for debutantes written a century ago; also, some “flavor” of their interplay was inspired by Little Women.) 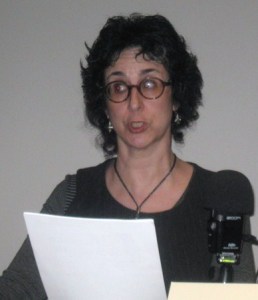 She read several charming and entertaining scenes featuring 15-year-old Jessica Campion, the bastard daughter of the Mad Duke Tremontaine by the actress known as the Black Rose, and Lily Martin, a girl of the same age who works in a Riverside tavern and wants to be a stage actress (plus ça change), who form a relationship, along with a scene with Alec Campion, the Mad Duke, and his swordsman Richard St Vier. In response to a question, Kushner said that she had no plans to write the oft-cited, legendary play The Swordsman Whose Name Was Not Death.

The guest-host returned to the front of the room to close out the evening.

As traditional at these Readings, the Jenna Felice Freebie Table offered giveaway books, and refreshments (cider, cheese and crackers, and tangerines). At another table, books by Sherman and Kushner were for sale and autograph.