By Mark L. Blackman: On the evening of Tuesday, June 6, 2017, the New York Review of Science Fiction Readings Series featured readings by Sam J. Miller and Lara Elena Donnelly, two Clarion “broodmates” from the graduating class of 2012 and collaborators on an epistolary novelette (about which more later), at its regular venue, the Brooklyn Commons Cafe on Atlantic Avenue in Brooklyn.

The night got under way with Jim Freund, Producer and Executive Curator of the Series, and host of the long-running live radio program Hour of the Wolf broadcast on WBAI-FM, calling the audience to attention with a duck call. (Apparently, it’s not only the 26th Season, but Duck Season.) While it was “in theory” the end of the Season, he revealed that he planned some special events, a Summer Season, in July and August, notably an evening of music dedicated to Ama Patterson. The 27th Season will “officially” start in September. Of special note: slated as readers on Tuesday, October 3 are Michael Swanwick and Gardner Dozois, and December will feature a musical event. He reminded the gathering of the importance of their donations (the suggested donation is $7, but no one is turned away) as there are costs involved, such as renting the space. Concluding, he introduced the first reader (“two ‘n’s, two ‘l’s”). 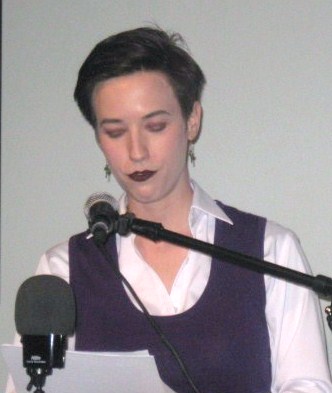 Lara Elena Donnelly is the author of glam spy thriller Amberlough (which has been described as “1984 meets Cabaret“ and “James Bond by way of Oscar Wilde”), and her short fiction and poetry have appeared in Strange Horizons, Escape Pod, Nightmare, and Mythic Delirium. She read from her sequel to Amberlough (due out in May 2018). In an alternate 1920s (Amerberlough is a city in Gedda) where fascism is rising (“so it’s relevant!”), celebrity and spy (there spooks are called “foxes”) Lillian dePaul is sent by her station chief to a film premiere in Porachis where Aristide Makricosta, the world’s most notorious refugee, puts in an appearance. She supplied accents for several characters. Afterward, Donnelly gave out Amberlough buttons.

During the intermission, there was a raffle drawing for donors for “cool items,” a Best Science Fiction and Fantasy of the Year anthology that’s not in stores yet, and that includes a story by Miller, and a copy of Amberlough “profusely illustrated” by Donnelly. Freund then introduced the second reader of the evening. 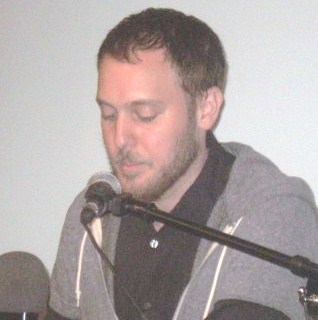 Sam J. Miller’s short stories have appeared in multiple “year’s best” anthologies (“but who’s counting?”) and been finalists for multiple Nebula Awards as well as for World Fantasy and Theodore Sturgeon Memorial Awards. His short story “57 Reasons for the Slate Quarry Suicides” (from which he read at the Fantastic Fiction Reading Series last year) won the 2013 Shirley Jackson Award. His debut novel The Art of Starving, which will be out in July, was called “Funny, haunting, beautiful, relentless and powerful… a classic in the making” by Book Riot. His second novel, Blackfish City, will be published in 2018.

Miller read from near the end of The Art of Starving, a section from which he had not read at the KGB three weeks earlier, though perhaps that audience overlap is why he did not provide sufficient background for the story. The protagonist, a gay teen, has come into supernatural powers through “the Art of Starving,” and, at an otherwise “perfectly banal” party at the home of a slaughterhouse owner, confronts a bully. 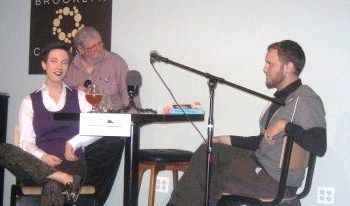 Freund then conducted a Q&A session with the authors who had, we learned, met online just before Clarion. The focus immediately shifted to their intriguing jointly-written gay epistolary time travel novelette (11,000 words), ”Making Us Monsters,” set in and after World War I, about gay English soldier-poets (or poet-soldiers) Wilfred Owen and Siegfried Sassoon. Owen died on the battlefield just a week before the Armistice, yet Sassoon is continuing to receive letters from him years after. “It took forever to sell the thing,” said Donnelly, despite it being the centennial of the First World War. (It will run in Uncanny in November, 99 years after the end of the War.) She wrote the Sassoon letters (“Lara writes gay men extremely well,” said Miller) and he Owen’s.

The two poets met in psychiatric treatment in 1917. (Owen was suffering from trauma, what we call PTSD and they “shell shock,” and Sassoon for opposition to the War.) During World War I, they explained, pacifists were considered traitors and given a choice between court-martial and psychiatric treatment; homosexuality was certainly viewed as a psychiatric condition.

What drew them to the period and to these two poets?, asked an audience member. Donnelly was interested in the ‘20s (she was a swing dancer, and has danced with fire) and had read D.J. Taylor’s Bright Young People, and socialite Stephen Tennant had had an affair with Sassoon. Miller had always liked Owen’s “Dulce et Decorum Est,” and hadn’t known that he was gay. (“The old lie: Dulce et decorum est / Pro patria mori.” Sassoon’s poetry likewise savagely un-glorifies the War’s horrors.) He is also interested in the history of psychiatric care — its evolution from a way to punish to a method of treatment — and in what constitutes mental illness.

As traditional at these Readings, the Jenna Felice Freebie Table offered giveaway books, while the Cafe saw to “wining [beer and coffee as well], dining and other worldly needs [three rest rooms].”

For those who missed attending, the event was Livestreamed (the audience is always cautioned that they’re “on the Internet visually”); visit Livestream.com and search for NYRSF.