By Mark L. Blackman: On the evening of Tuesday, September 8 (a record-breaking scorcher in New York, and, per the Swanwicks, it was also “hot as Hell in Philadelphia”), the New York Review of Science Fiction Readings Series opened its 25th or silver anniversary season – an impressive landmark – with two sterling readers, Michael Swanwick and Rajan Khanna.

The Series has nicely settled into its new venue, the Brooklyn Commons Café, less than a parsec from the Barclays Center in that renowned borough.  (The reading space is, incidentally, two floors below WBAI-FM.)  In his introductory welcome, executive curator Jim Freund, host of that self-same WBAI-FM’s Hour of the Wolf radio program on sf and fantasy (which broadcasts and streams every Wednesday night/Thursday morning from 1:30-3:00 a.m.), shared his excitement over the Commons’ facilities, including three robotic cameras (with an eye to sparing us from embarrassment, he warned the audience about the cameras that were streaming the event live via Livestream and archiving it for a period of time [see http://livestream.com/accounts/12973202/events/4332267/videos/98611309], and lauded the professional skills of Terence Taylor, sf/fantasy writer and video producer.  (Will video kill the radio star?)

In continuing remarks, Freund noted that the date (September 8) was the birthday of Gordon Van Gelder, who began the Reading Series (and was born on the day that Star Trek premiered). Freund also announced a Kickstarter campaign (the Series’ first) to begin in December (so the money may be dispersed in January, plus it’s convenient for holiday gifts). The downside of the new venue is increased costs (such as space rental), and most every event is run at a loss.  (Admission remains free, with a suggested donation of $7.)  He announced as well the next reading, on 6 October, which will feature Brooke Bolander and Matthew Kressel; Amy Goldschlager will guest-host.

In related news, Freund shared that his September 10th Hour of the Wolf would be expanded to 5 a.m. and feature Ken Liu, with possibly a rebroadcast of an earlier show with him, and that his September 17 show would feature Ellen Datlow. And speaking of whom, on Wednesday, September 16, the Fantastic Fiction at KGB [Bar] Reading Series, hosted by Datlow and Kressel, will present Tom Monteleone and Lawrence C. Connolly.)  Eventually, he introduced the evening’s first reader. 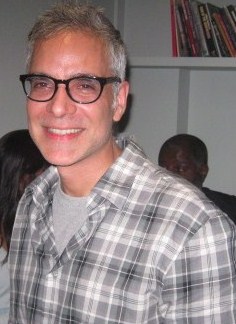 Rajan Khanna is an author, blogger, reviewer and narrator.  The selection from which he read was taken from his second novel, Rising Tide (due out in October), a sequel to his first, Falling Sky.  For the benefit of those who hadn’t read it, he offered a chapter with flashbacks.  The story is set in a post-apocalyptic near-future where a global pandemic, the Bug, has regressed numbers of people to a violent, animalistic (and, of course, hungry) state; they are called Ferals and their fluids are highly contagious.  Salvage is the order of the day, and the protagonist joins other independent airship operators on a raid on a police facility’s weapons store.  (Wow, airships and sort-of-zombies!)  His airship is called the Cherub, which he reminds them is a sword-wielding winged guardian, but which the others think of as a “fat baby.”  One guess what they run into.  Khanna’s voice is, as we heard, well-suited for narrating, and he held the audience rapt.

During the intermission, as traditional, a raffle was held for donors; the prizes were an advance copy of Rising Tide, the manuscript from which Swanwick would be reading, and a copy of After, a young adult anthology on the themes of apocalypse and dystopia, co-edited by Ellen Datlow. (Richard Bowes, also present, noted that he had a story in it.)  Afterward, Freund introduced the second and final reader, Michael Swanwick. 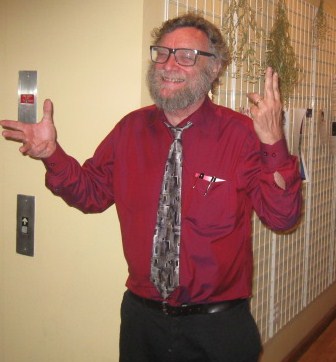 Michael Swanwick’s body of work includes Stations of the Tide, In the Drift, Vacuum Flowers, Griffin’s Egg, The Iron Dragon’s Daughter, The Dragons of Babel, and Jack Faust, and the short fiction “The Edge of the World,” “Radio Waves,” “The Very Pulse of the Machine,” and “Scherzo with Tyrannosaur,” and he has been honored with the Hugo, Nebula, Theodore Sturgeon Memorial, and World Fantasy Awards.

His reading was chosen from his latest novel, Chasing the Phoenix (just out from Tor Books), continues the adventures of post-Utopian con men and scoundrels Darger and Surplus (a genetically-modified dog – so he’s a con dog?) – last seen in Dancing with Bears – in which they conquer China, accidentally.  In the selection that he read, which had the audience laughing out loud, the devious duo flatter the Hidden King’s dreams of becoming Emperor, then make a deal with his rival monarch.

As customary, refreshments included crackers and cheese, and there were books offered on the Jenna Felice Freebie Table.  The audience approached 60.  (The East River is no longer a barrier.)  Among those present were Beth Anderson-Harold, Melissa C. Beckman, Brooke Bolander, Richard Bowes, Ellen Datlow, Kris Dikeman, Amy Goldschlager, Rusty Harold, Barbara Krasnoff, John Kwok, Lissanne Lake, Marianne Porter, James Ryan, Max Schmid and Terence Taylor. (Stephen Colbert was otherwise occupied.) At the end of the evening, instead of the long-established practice of going out with the writers after the reading, the gathering was on-site at the Café itself.  (The Commons offers coffees, teas, beers and wine by the glass, as well as sandwiches, salads and pastries.)