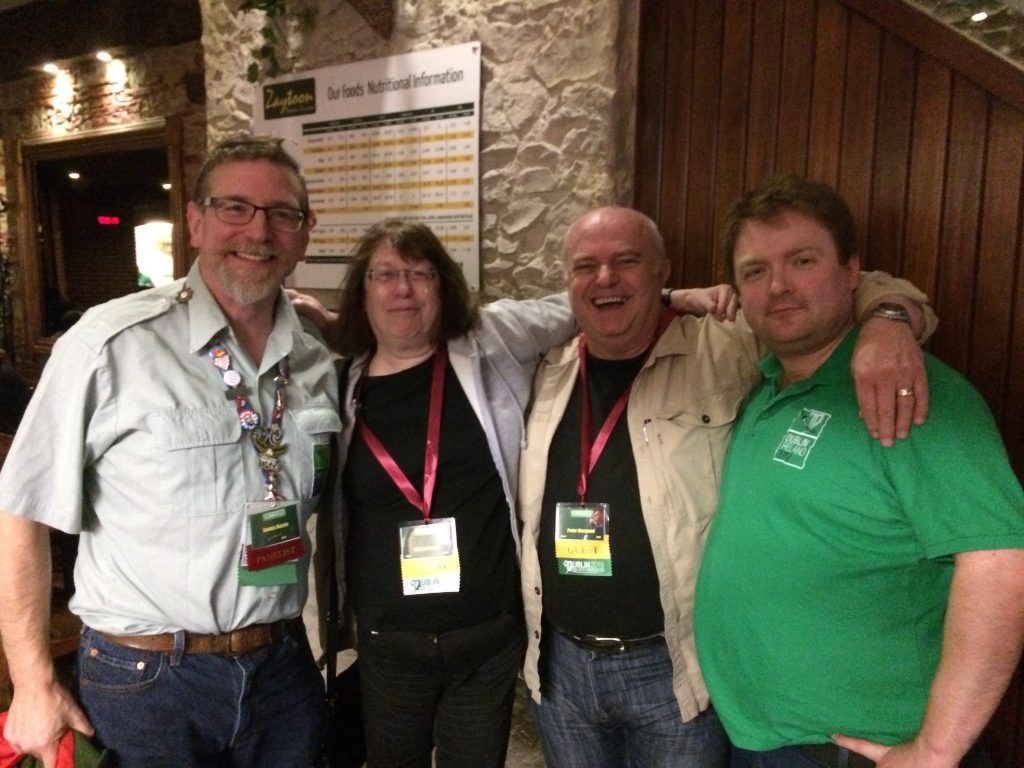 By James Bacon: After the ceol and the craic of Friday night at Irish DiscWorldcon, I slept well and made an early breakfast with Vanessa, before heading to Kent Station, Cork for the 10.40 departure, but as we go we are wished warm and pleasant farewells from Siobhan the Irish DiscWorldcon Chair.

Octocon beckoned and once we arrived in Dublin, the trip from Heuston Station to the Camden Court Hotel, in the City centre, on the south side of the Liffey was quick in a taxi. The warm welcome at Octocon was amazing and as we walked in we are greeted, and soon joined other committee members at the Dublin 2019 table. We were also met by Janet O’Sullivan the chair of a Octocon and Sakura Perez the programme director as we receive our memberships and I hear that membership has hit 350 people, which is a fine figure for Octocon. 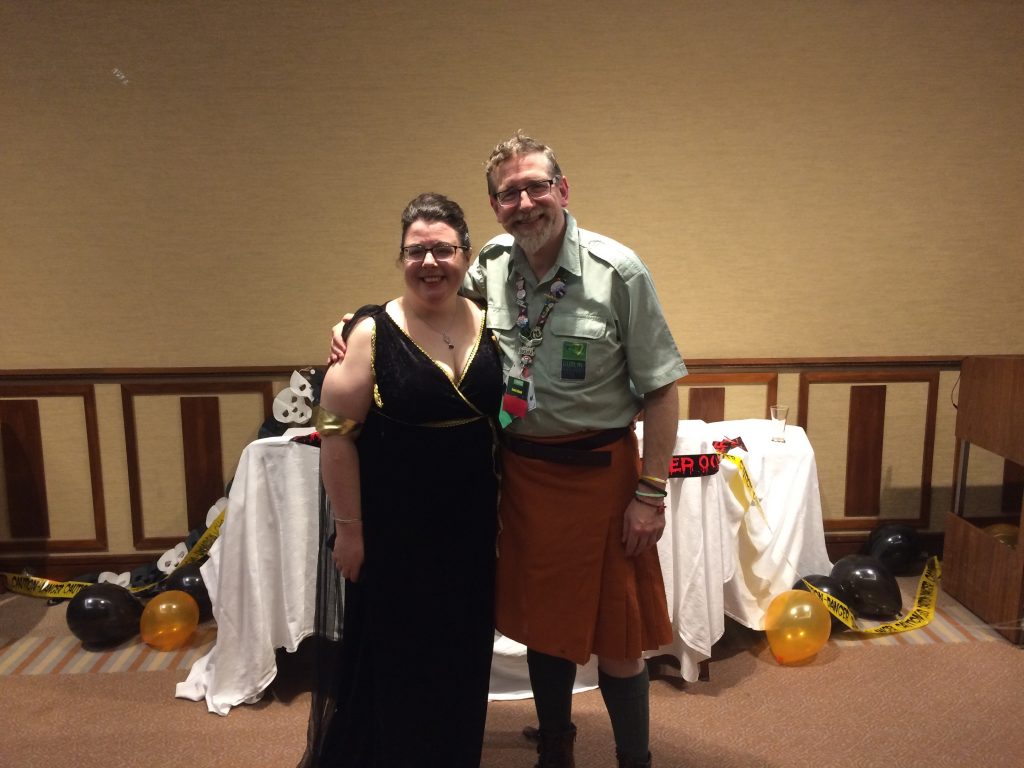 I thought that I’d get into some programme but suddenly I’m catching up with so many folk that over two hours passes by, our table is strategically placed near the bar and I encounter many friends and new fans, and also pleased to listen and hear the excitement for the Dublin 2019. I look to hand out some ribbons, which are popular here, but new, and so any are well accepted, I have a variety of old ones, and they are eagerly received. 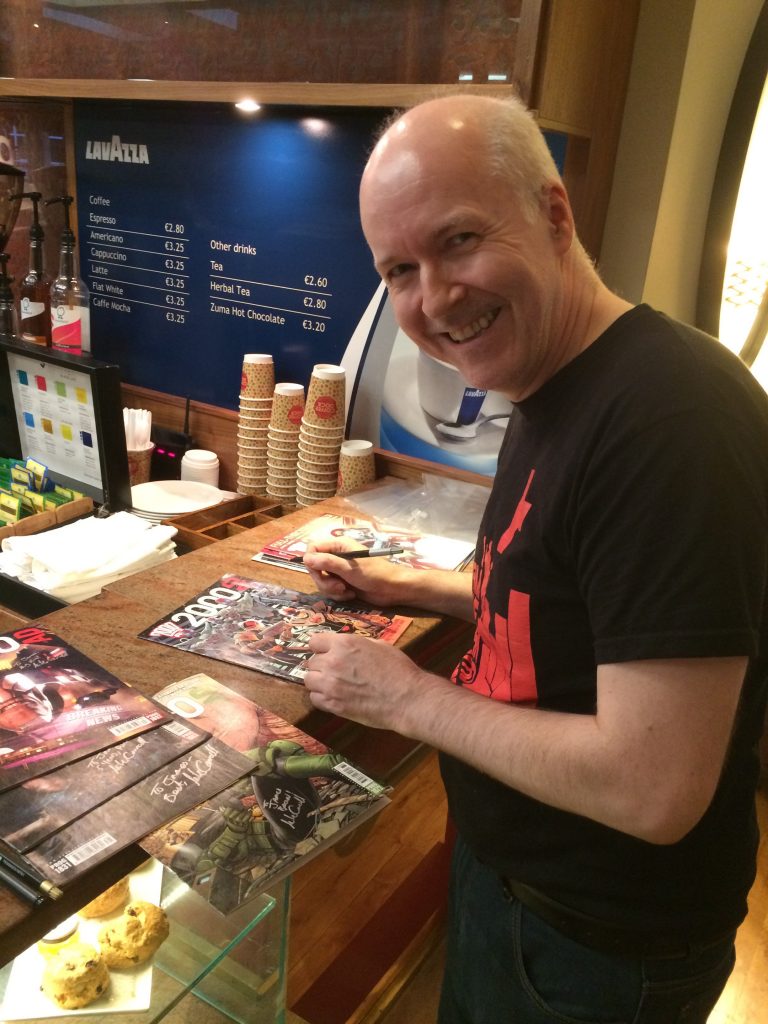 I take a moment to catch up on a presentation, one by Michael Carroll. Mike is a writer and long-time fan here in Dublin, who has written prose, script and comic. He has written over 100 episodes of Judge Dredd for 2000AD, amongst a wide variety of work. After talking a little bit about one of his recent stories in that comic, he begins an incredible motivational and pragmatic presentation about writing. I am fascinated, his sound bites and ideas, make so much sense. Simple things like “Finish the work” and  “No one cares what you’re ‘going to write’ only what you have written” — the point being that the thing you’ve not yet written doesn’t actually exist, so people can’t evaluate it. “Start,” it all makes such wonderful sense.  His positive encouragement and forthright honesty is quite fantastic. His sensible and achievable down to earth advice is amazing and he has the whole room enrapt, and indeed it is compelling, I am wondering myself about the idea of a story, and how, well, I haven’t actually followed his rules and sure isn’t it a wonder that I am nowhere near writing it. He offers five rules of writing which somehow seem very basic, but with consideration filled with crucial points.

It is a wonderful programme item, and I really enjoyed it. Overall feedback at Octocon is that the programme is exciting and interesting and indeed, I note that I am challenged for choices. The programme booklet is visible here.

I get to meet Paul Trimble who runs Enniskillen Comic Fest [Facebook link].  I am looking forward to this event next year, and really enjoyed it this year and it is vital for the Dublin 2019 team that we connect across the country here, and Vanessa from promotions is chatting with Paul, as well as the team from WexWorlds.

The chat and laughter never stops, and it is just brilliant to be home. This is home you know, my science fiction fannish home, my first convention, my first piece of purchased artwork, my first book signed, so many firsts happened at Octocon for me, and it is a vital part of my makeup and I love it. It has had many venues, shapes, committees and guests, and now in its twenty-seventh year, it is an amazingly well spirited and friendly convention. The attendance includes a lot of new fans. Indeed, I smiled when Janet pleasantly informed me that they ran out of ‘first time attendee’ ribbons when they gave out their 42nd, such a science fictional significance.

The feeling of celebration continues as the Dublin 2019, An Irish Worldcon promotions team of Vanessa May, Marguerite Smith and Sara Felix have worked closely with Janet O’Sullivan chair of Octocon and the team and so have sponsored the nights entertainment here. The promotions team have a new Iain Clarke poster, which I really like, and magic green wands that are multi-functional, and so the evening’s  entertainment has a theme. 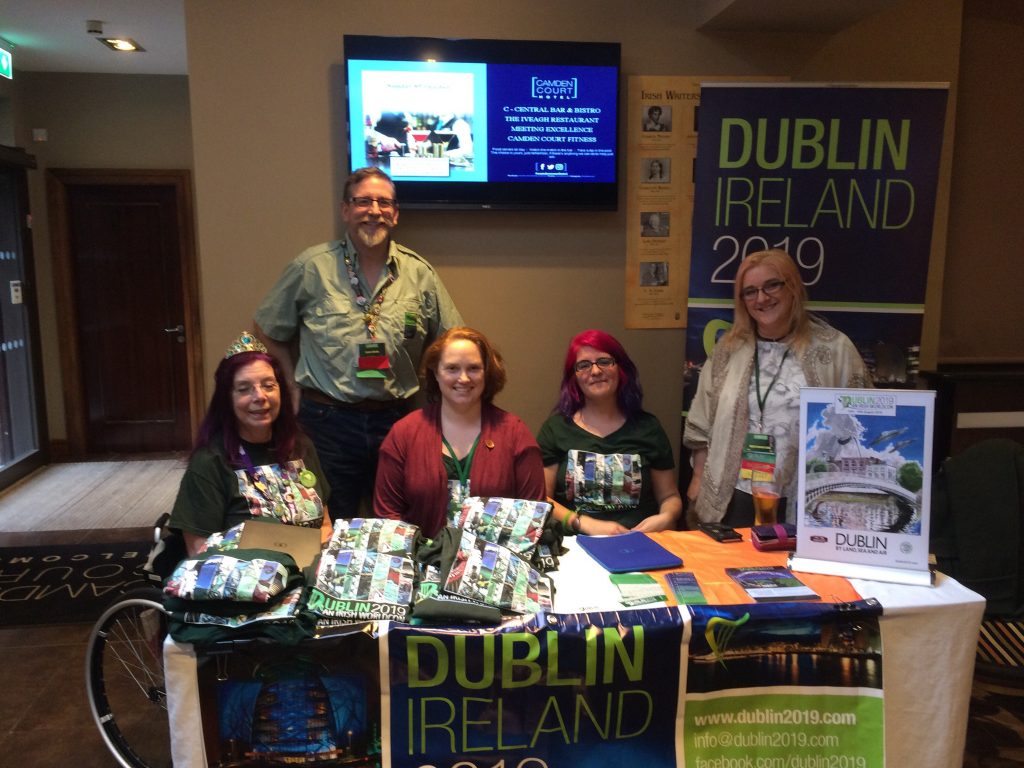 As the dancing continues, the Octocon arrange Guerilla DJ Phil Dyson to extend the disco into the early hours, alleging that a ‘post party, party’ is occurring during clean up and so dancing continues, and indeed the music by Phil is excellent. 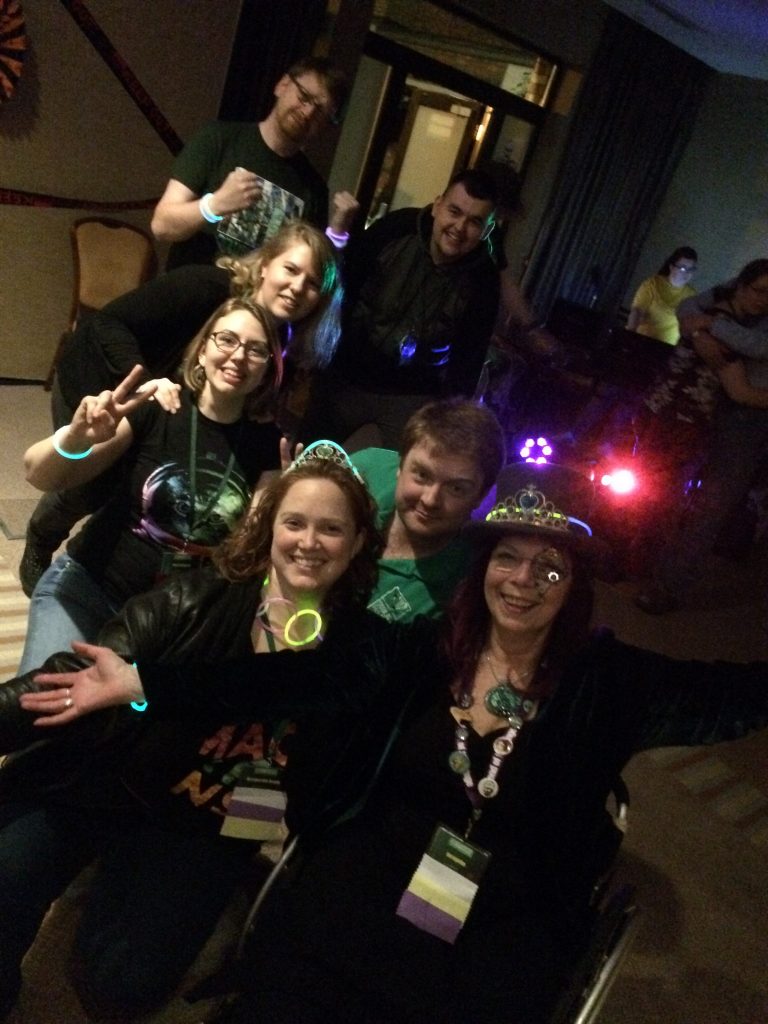 I attended a Fan Fund discussion and was well pleased to engage with Fia Karlsson the current NOFF delegate from Sweden. The Nordic Fan Fund happily sending Fia here to Dublin. Previous fan fund winners Tobes Valois and James Shields engaged with loser Douglas Spencer under the keen moderation of Fiona O’Sullivan. I made good mention of bursaries and other elements that are out there to help fans.

Listing off future cons is a thing at Octocon, and David Ferguson of Irish Comic News and Carol Connolly listed all the events that would be taking place in the next twelve months and beyond. Much mention was made of many cons including the Dublin Comic Con which got a lot of positive comment and was nice, I had to miss this years one, Dublin 2019 had a strong presence with other cons, handing out thousands of free books and comics as part of an outreach initiative.(http://forbiddenplanet.blog/2016/dublin-comic-con-report/). There is quite a lot going on in Ireland right now.

Future vista of conventions and events in Ireland is positive but it was a special moment as Carol skipped forward a little bit to August 2019.

I was courteously allowed some time to speak at the closing ceremony, and thanked the Octocon Committee and previous committees, as well as the members. They, a huge amount of people have been collectively hugely supportive. It was five years ago that I stood up, and the chair asked for recording devices to be turned off, and shared the secret that a Irish bid for a Worldcon was in the offing. Now to thank everyone as we are a seated Worldcon was an amazing thing. I made mention of our ‘First Worldcon’ rate of €100 and also of the Fantastic Dublin Fund, which is there to help people who need some help. I said that it would pain me greatly to work on something like this for many years, to find that some regular fan, just could not get to it. My sentiments were noted, and as I finished off by thanking everyone, my brief moment at the top of the room ended with ripping applause and cheering. A good bunch here, the noise from the closing ceremony was rapturous at the right times, that is for sure.

I’ll be heading to the con next year of course, although a venue change is on the cards, and dates will need to be confirmed, but at the end of the closing ceremony, after Janet had announced this news, the queue to join up for next year, was as long as ever, if not longer.

The evening continued, and later I found myself introducing many foreign fans to a ‘Spice Bag’ later at my Mom’s up the road on Black Horse Ave, ending the evening with a unique Dublin dish, and more talk, everyone having loved the con. Seven Spice bags please!

I admit it, I missed so much, The Blasters, the Vault of Horror, the amazing Guests of Honour, Dan Abnett and Nik Abnett, the variety of guests, the wondrousness of home-made foods in the dealer’s room, next to great books and comics. There was so much, and all the while the spirit was fantastic. 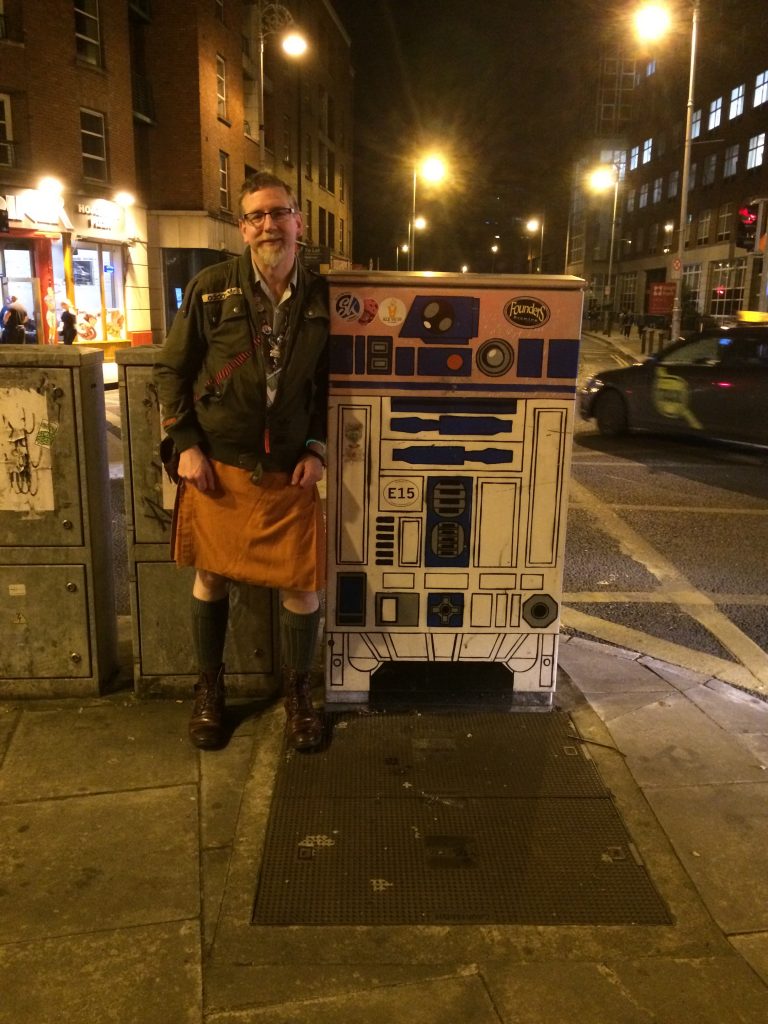