By James H. Burns: There was a special television treat for youngsters, at Thanksgiving weekends during the 1960s and, if memory serves, some time beyond.

To be sure, many families began their holiday Thursday with the Macy’s Parade from Manhattan (and broadcasts of the processions from other cities).  I’ve written about some other fun traditions before, such as WOR-TV’s annual King Kong festivals, and WPIX’ long-time broadcasts of Laurel and Hardy’s March of the Wooden Soldiers (aka Babes in Toyland), which began many years earlier.

But almost forgotten today is the fun the ABC network fostered nationwide, on the Fridays after Thanksgiving.

For years, ABC would run an extra edition of their Saturday morning schedule!

Those were great days for fantasy fans, and particularly the youngest of that set.

The super hero boom of 1966 inspired many animated renditions across the airwaves.

In 1967, for example, ABC’s lineup included The New Casper Cartoons Show (this was the terrific series, also often overlooked, that had stories featuring many of the great Harvey Comics fairy-take like characters, in “The Enchanted Forest,” and not simply the theatrical shorts that seemed to recycle the same plot, continually!); Marvel Comics’ The Fantastic Four and Spider-Man (the first from Hanna-Barbera, the second from Grantray-Lawrence Animation and Krantz Films,  the same studio that produced the previous season’s syndicated, daily Marvel Super Heroes Show);Journey to the Center of the Earth (one of Filmation Associates’ (Lou Scheimer, Norm Prescott and Hal Sutherland) first major network sales; King Kong (from Rankin-Bass, set in the same fictional universe as their live action King Kong Escapes! theatrical feature film); and another season of The Beatles cartoon!

As others have noted, Saturday mornings, on television, seemed to belong to us, when we were children. Our parents, and grandparents, may have had a day at the movie theatre, featuring cartoons, shorts, serial chapters, and a couple of feature films….  But with the flip of a switch, we could watch all these great comedies, and adventures, with ease (and often in our pajamas)!

After a day filled with turkey and family festivities, there was something delightful about several hours of entertainment designed specifically for us…  (Indeed, an extra Saturday!) There was disappointment when the episodes were sometimes repeats of segments we had already seen. 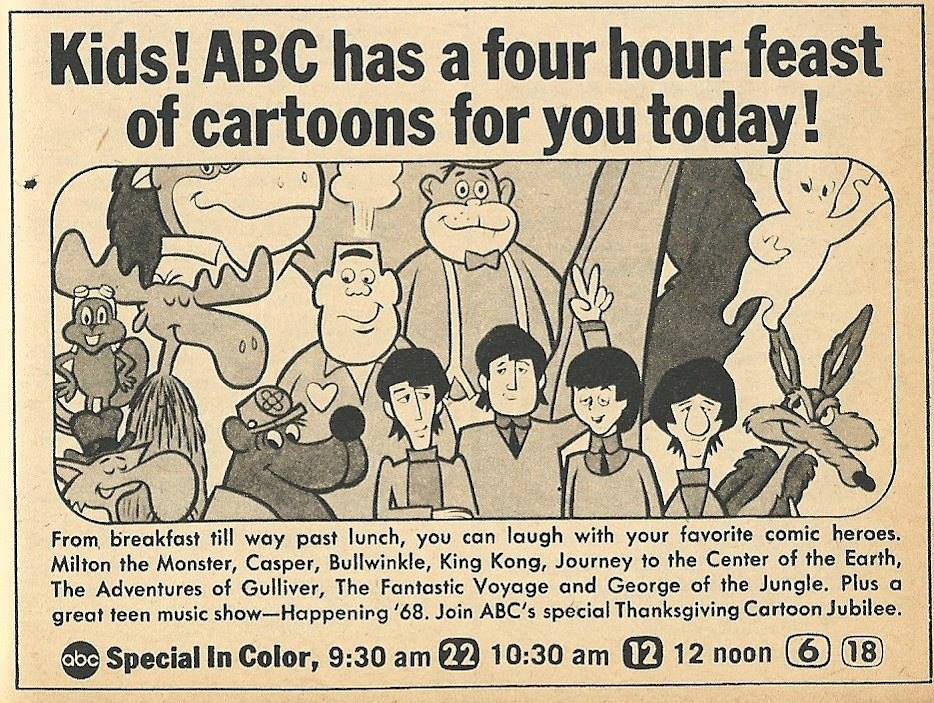 One particular treat was one Thanksgiving–or perhaps another holiday week afternoon–when ABC ran a special daytime screening of their hit Batman television series. There was an extra pleasure in having the dates of one of our family friends sitting and watching with me, particularly as she resembled Wende Wagner, the female lead on the contemporary Green Hornet TV series!  The young lady kindly helped me spell out the fight-scenes’ sound effects “words.” (I wonder if it’s generally realized that the 1960s Batman TV show helped a bunch of us toddlers learn how to spell?)

Video cassettes and DVDs and now downloadable media have substituted for this special kind of fun. Kids and their families, of course, can watch whatever they want to see, virtually whenever they want to view it. (The phenomenon of kids wanting to watch the same movie or TV show over-and-over still strikes me as a mystery. When I was a child, my friends and I were annoyed by endless repeats!)

There was some kind of unique fun in knowing — even if one didn’t consciously realize it — that you were united with millions of other youngsters around the nation.  Once upon a time, we sat together in the greatest matinée theatre in the world — living rooms and bedrooms and dens, separated only by walls, and neighborhoods, but not by the smiles and laughter that endure in memory….

Or even when one pops in a disc, or scans the titles on You Tube!

10 thoughts on “On the Friday After Thanksgiving: Enchanting Chances, And Cosmic Dances”