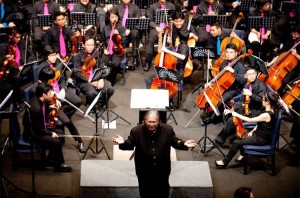 Operacon, an unusual relaxacon, is scheduled to coincide with the performance of Somtow Sucharitkul’s new work “The Snow Dragon” in Milwaukee. Rendezvous for this cultural event at the Hilton Milwaukee Center the weekend of March 12-15, 2015.

“The Snow Dragon” is the Thai-American composer and author’s seventh opera, based on his 1982 short story, “The Fallen Country.”

The opera’s plot centers on young Billy Binder, who escapes from his painful life to a fantastic world of eternal snow, where he rides a dragon, fights monsters and rescues princesses. Yet the world is ruled by the evil and omnipresent Ringmaster. Defeating the Ringmaster in the fantasy kingdom is key to overcoming Billy’s real-world problems, but that’s easier said than done.

After its Milwaukee world premiere, the opera will head to Thailand for a special performance in honor of King Bhumibol Adulyadej.

The organizers are composer Somtow Sucharitkul, hotel liaison Dina Krause, and “everything else” Dick & Leah Smith.

Somtow says this will be his first con in 20 years.

[Thanks to Leah Smith for the story.]