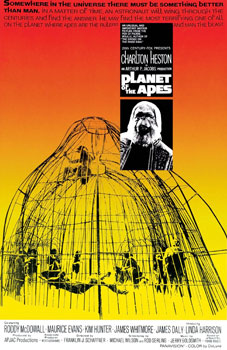 Planet of the Apes poster

Jerry Goldsmith’s music for The Planet of the Apes received an Academy Award nomination and now ranks No. 18 on the American Film Institute’s Top 25 American film scores. Here is a split-screen video of the orchestra accompanying “The Hunt” scene from the movie.

The music was performed at a Jerry Goldsmith tribute by the Tenerife Film Orchestra and Choir in 2009 at Fimucite, the Tenerife International Film Music Festival, in the Canary Islands.