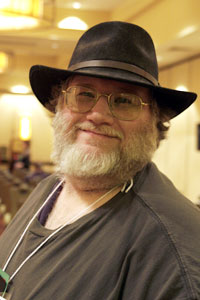 SF author Dr. Philip Edward Kaldon died April 20. The cause of death has yet to be posted. His last few blog entries dealt with his health problems, and being treated by an orthopedic surgeon, although nothing he described as life-threatening.

Kaldon was born in upstate New York. After graduating high school in North Carolina in 1976, he took a B.A. at Northwestern, and advanced degrees in physics at Michigan Technological University. He taught physics at Western Michigan University for many years, and was known as “Dr. Phil” til the one on TV came along.

Having his short story “The Brother on the Shelf” published in Analog (2009) was the fulfillment of a lifelong dream. (Equally pleasing, the story was optioned by a producer.)

“Machine” and “In The Blink Of An Eye” both appeared in Andromeda Spaceways Inflight Magazine in 2009. “Hail to the Victors” can be read at Abyss & Apex (2011). “End Run” (2012) was published by GigaNotoSaurus (edited by Ann Leckie).

Two other stories are mentioned on his website: a contest entry published online, and a short story selected for a forthcoming anthology.

Kaldon is survived by Debbie, his wife of 32 years.