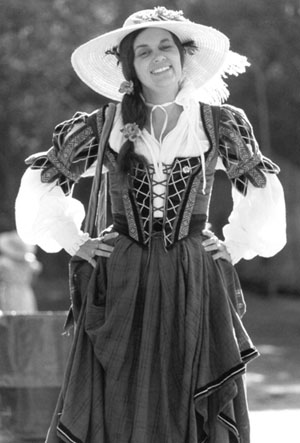 Renaissance Faire co-founder Phyllis Patterson died May 18 at the age of 82.

The Faire grew out of the “Into the Woods” drama-and-arts program Patterson conducted in the backyard of her Laurel Canyon home in the early Sixties. Her nine-and-ten-year-old students, performing on a commedia wagon built for the occasion, took first place in a children’s theater competition and so enjoyed themselves that they besieged Phyllis with requests to “do that again!”

Phyllis and her husband Ron responded by arranging for Pacifica radio station KPFK to sponsor the first “Plesure Faire and May Market” on May 11-12, 1963. It was held at Oliver Haskell’s Ranch for Girls and Boys in North Hollywood. Finding a location would not always be so easy.

As the event grew into the now-familiar annual Renaissance Pleasure Faire, a 16th-century celebration complete with outsize turkey legs, flagons of ale, handcrafted wares for sale, jousting and swordplay, the Pattersons sometimes struggled to get county officials to authorize the necessary permits.

When her request was initially denied in 1966, she found a way to bypass the decision by asking the American Film Institute to produce a documentary of the event so that she could open the gates with a “film permit” (all of the attendees became “extras”).

Also in 1966, the Pattersons expanded their event to the San Francisco Bay Area, holding the first Northern California Faire in China Camp in Marin County. Similar events are now held all over the country.

Phyllis Patterson’s commitment to historical accuracy sometimes led to moments of unintentional comedy. “I remember a young girl running up to me a few years ago, almost crying,” she told The Los Angeles Times in 1987, “saying: ‘You’ve got to do something. Someone’s back there playing Bach.’ ”

The Pattersons divorced in 1980, and Ron died in 2011. The Patterson family continued to be involved with the Faire until the late 1990s.

To the end of her life Phyllis Patterson had a preference for the rustic. Until she was hospitalized, she lived in a log cabin in Novato, California.