(1) BEST OF TED. Ideas.Ted.com. features Nnedi Okorafor: “’Write your story, and don’t be afraid to write it’ — a sci-fi writer talks about finding her voice and being a superhero”.

During family visits to Nigeria in the 1990s and 2000s, Okorafor was fascinated by the harmony between traditional belief systems and brand-new electronic devices. “I started noticing the use and the interplay of technology in Nigerian communities, especially when cell phones came around,” she says. “I saw phones popping up in the most remote places, and they were normalized in really cool ways.” She wondered why stories didn’t depict technology in African nations. In fact, she began to wonder why she wasn’t writing such stories herself.

In college, however, Okorafor found herself discouraged from writing science fiction. “I had professors who were constantly telling me, ‘You’re such a good writer; you want to stay away from all of that weird stuff,’” she remembers. “Eventually I just kind of jumped the rails, because I couldn’t help it.” Okorafor dove headfirst into creating the stories she never found on library shelves growing up — ones with strong female protagonists of color, African locations, speculative technology, aliens and magic, as well as complex and relevant social themes like racial identity and gender violence.

And this is why Charles Selle’s ridiculous call to “raze the edifice” of Waukegan, Illinois’ historic 1903 Carnegie Library building is short-sighted and, frankly, emblematic of Waukegan’s frustrating inability to capitalize on its own crown jewel lakefront location and its remarkable history. Cities large and small across the nation are embracing historic revitalization and renovation, attracting artists and entrepreneurs, restaurateurs and urban visionaries who see the connection to the past and the future. Selle’s assertion that the city is “hanging on to the past” with the long-abandoned Carnegie building is correct. Yet he misses the point entirely. Waukegan should hang on to its past. Selle doesn’t even propose a replacement suggestion for the location, instead only calling for the complete demolition of a building with landmark status. The fact of the matter is that the current plans to house the Ray Bradbury Experience Museum in the Carnegie is the best chance to renovate the old biblio-gem, to raise the needed funding, and to properly honor one of the world’s great, inspiring imaginations….

(3) OUT OF THE LINEUP. With Wendig gone, the Shadow of Vader comic has been sidelined, says The Hollywood Reporter — “Marvel Pulls Fired Writer Chuck Wendig’s ‘Shadow of Vader’ Series From Schedule”.

Marvel Entertainment released the official list of January 2019 comic book product this week, and one title was notable by its absence: Shadow of Vader, the five-issue comic book series written by Chuck Wendig, the writer Marvel fired last week because of his social media use.

(5) UPTOWN SPOT. Ed Green worked as a background actor on the Bruno Mars “Uptown Funk” music video – it’s good thing he got the gig before this new generation of robots came along!

(6) IN PRAISE OF FAMOUS MEN. Except in Slate, this praise is intended satirically — “In Defense of Soylent Green Inventor Henry C. Santini”.

On October 16, 2018, Popular Mechanics published a deeply weird tribute to mercurial industrialist Elon Musk, in which a carefully-curated group of technology journalists and Musk’s fellow rich people praised him for trying, regardless of what he was trying to do, whether or not he succeeded, or the methods he used to pursue his goals. One writer compared him at length to Mark Twain!

On October 16, 2022, NYPD detective Frank Thorn discovered that Soylent Green was made of people. The ensuing public scandal threatened the reputation of Henry C. Santini, the Governor of New York and a board member of both Holcox Manufacturing of Norfolk, Virginia and its parent company, the New-York-based Soylent Corporation.

He is under attack. For saying the wrong thing, for not making enough Soylent Green, for creating a global manufacturing pipeline based on baking human corpses into little green crackers and telling people they’re made out of plankton. Some of the criticisms have merit. Much of it is myopic and small-brained, from sideline observers gleefully salivating at the opportunity to take him down a peg and maybe score a few extra rations in the process. But what have these anti-cannibalism activists and pontificators done for humanity?

Henry Santini is an engineer at heart, a tinkerer, a problem-solver, a genius at disguising the taste of human flesh—the kind of person Slate has always championed—and the problems he’s trying to solve are hard. Really hard. He could find better ways to spend his money, that’s for sure….

(7) HONEST TRAILERS. These YouTubers bid you “Return to the MCU franchise that makes you say ‘sure’ – It’s Ant-Man and The Wasp.”

Caroll Spinney has been a television mainstay since 1969, but his face has rarely made an appearance.

Disguised beneath a frock of bright yellow feathers and an orange bill, the “Sesame Street” puppeteer was the heart and soul behind Big Bird and Oscar the Grouch since the show’s premiere almost 50 years ago.

Now, at the age of 84, Spinney told the New York Times that he is retiring from “Sesame Street” after nearly half a century playing some of the show’s most iconic characters. Come Thursday, Spinney will enter the “Sesame Street” studios in Astoria, Queens for the last time before leaving the roles behind forever.

Nocturnal Reader’s Box (NRB), a “subscription box service shipping horror-themed books and merchandise for the price of $35 per month,” shut down in September. According to Bleeding Cool, the service run by the husband and wife team of Jessica and Vincent Guerrero was the “subject of numerous complaints about late or nonexistent shipping, changes to the company’s terms of service, missing or different-than-advertised items, and purportedly non-existent tracking numbers.”

The website for NRB currently states that “We’re temporarily closed!” Despite this, people online are alleging that NRB is still charging credit cards and that automatic renewal charges are still going through….

(13) VIEWED FROM THE INSIDE. Joseph Bentz answers the question “Why Is Writing So Hard?” — but as many books as he has out, you’d never suspect he had reason to ask!

Why do you need all those writers conferences to commiserate and moan about an activity—writing—that you supposedly love?

It’s a fair point, and yet, writers are very familiar with all those agonizing hours we spend squirming, staring at walls, searching for words, deleting words, and writing through drafts that won’t quite come together. Why such struggle?

I finally figured out why writing is so hard….

(14) FRANCOFILE. Adweek devotes an article to French company Cdiscount’s ad campaign — “These Outlandish Aliens Getting Ecommerce Deals Is the Spaciest of Oddities” – unfortunately, registration is required to read it.

The animated space creatures featured in Cdiscount’s latest campaign are absolutely over the moon about the French ecommerce site.

Thanks to YouTube you can see the ad – and if you speak French, even understand it!

(15) LEGACY. Vice’s Motherboard website explains how “How Paul Allen Saved the American Search for Extraterrestrial Intelligence” by donating money to the effort.

On Monday evening, Microsoft co-founder Paul Allen died of non-Hodgkin’s lymphoma at the age of 65. At the time of his death, Allen was the 47th richest person in the world, with a net worth of $26 billion. For the last few decades of his life, Allen used his wealth for a staggering variety of business and philanthropic interests. In addition to owning the Seattle Seahawks and the Portland Trail Blazers, Allen founded a brain science institute, an AI institute, and Stratolaunch Systems, which was exploring private spaceflight.

Yet one of the research areas where Allen made the biggest impact was also the one he spoke about the least: the Search for Extraterrestrial Intelligence (SETI). Indeed, Allen almost single-handedly rescued American SETI by donating over $30 million to scientists scanning the cosmos for intelligent radio signals.

(16) BRIGHT IDEA? According to the People’s Daily Online, China plans to use a mirror satellite to provide outdoors nighttime illumination for the city of Chengdu—and real soon now  (“Chengdu to launch ‘artificial moon’ in 2020”). The claim is that it will be several times brighter than a full moon over the city.

Wu made the remarks at a national mass innovation and entrepreneurship activity held in Chengdu on Oct. 10.

The illumination satellite is designed to complement the moon at night. Wu introduced that the brightness of the “artificial moon” is eight times that of the real moon, and will be bright enough to replace street lights.

…Some people expressed concern that the lights reflected from space could have adverse effects on the daily routine of certain animals and astronomical observation.

Kang Weimin, director of the Institute of Optics, School of Aerospace, Harbin Institute of Technology, explained that the light of the satellite is similar to a dusk-like glow, so it should not affect animals’ routines

(17) WAX ON. WAX OFF. Gizmodo’s io9 warns you, “Don’t Blink: Jodie Whittaker’s Doctor Who Wax Figure Is Watching You.” 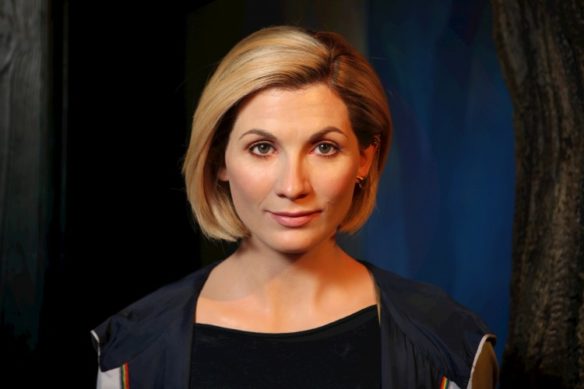 That’s not a picture of Jodie Whittaker, Doctor Who’s new star, up there. Seriously. It’s a wax recreation so good that even the Nestene Consciousness itself would be a bit jealous of the handiwork behind it.

This frankly absurdly lifelike replica of Whittaker in her full 13th Doctor regalia is the work of a new Doctor Who experience at Madame Tussauds in Blackpool. Alongside the uncanny recreation of the actress, the experience includes one of the actual TARDIS props used during the filming of the 11th season of the show, as visitors are tasked with trawling a forest to hunt down the Doctor’s sonic screwdriver—retrieving it and bringing it back to its rightful, albeit waxy, owner.

(18) TROPE THEORY. The Fifth Element, Enchanted, Tron Legacy, My Stepmother Is an Alien, Sheena, Planet of the Apes, Stargate, Star Trek, Splash and other mermaid tales, even Forbidden Planet.  The female characters in the movies and shows are what Pop Culture Detective labels “born sexy yesterday” and describes as a male fantasy trope.  Occasionally, as in Star Man, the trope is in reverse.

(19) LIVE FROM 2007. For reasons that would take too long to explain I watched a lot of Commando Cody episodes before the start of LASFS meetings, so I especially enjoyed this parody of the classic serial –