(1) LOOKING BACK ON HORROR. From Rocket Stack Rank, here’s a new (perhaps the first annual) selection of “Outstanding SF/F Horror” of 2016-2017.

Although horror isn’t our focus, we do review horror stories that turn up in our regular magazines, so in honor of Halloween, here are 26 outstanding science fiction & fantasy horror stories from 2016-2017 that were either finalists for major SF/F awards, included in “year’s best” SF/F anthologies, or recommended by prolific reviewers in short fiction (see Q&A).

(2) WRITING PROCESS. Jonathan LaForce notes it would be a waste to take the popular phrase literally — “Killing off the Darlings” at Mad Genius Club.

Perhaps “killing our darlings” is too much the wrong verbiage.  Let us say, instead, “putting them on ice.”  That’s really all we’re doing- setting them aside till we can use them again later.  In this age of incredible digital technology, why worry about where you’ll save those scenes, those stories, those parts and pieces?  Anybody take a look at how much space is available to use on cloud servers?  My goodness!

Eddie’s struggles to find a new gig while oily tentacles are shooting out of his body in response to even minor discomforts are the most diverting section part of the film, if only because Hardy is fully committed in a way no other actor here is. Had this thing been greenlit at the 1990s apex of Venom’s popularity as a comic book character, it almost certainly would’ve starred Jim Carrey. So we all dodged a bullet there.

(4) SOUND NUTRITION. While in San Jose, Scott Edelman nibbled naan with K. Tempest Bradford and recorded the results for Episode 78 of Eating the Fantastic. 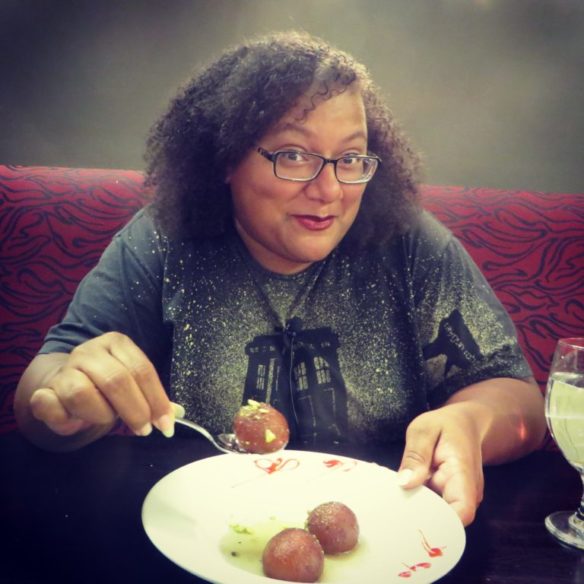 …I also went out to dinner with K. Tempest Bradford for one of the best meals of that extended weekend in the Santana Row neighborhood at Amber India.

K. Tempest Bradford’s short stories have been published in such magazines as Abyss & Apex, Sybil’s Garage, Electric Velocipede, and Farthing, and anthologies like Clockwork Cairo, Diverse Energies, Federations, and Shadow of the Towers: Speculative Stories of a Post 9/11 World. Her non-fiction has appeared at NPR, io9, xoJane, plus the Angry Black Woman blog, sometimes — as you’ll hear us discuss — going viral. Along with Nisi Shawl and Cynthia Ward, she teaches the Writing the Other workshop, and is on the board of the Carl Brandon Society. She also happens to be one of the funniest people I know. Whenever I’m with Tempest, I can be assured there will be laughter.

We discussed how her Egyptian Afro-retro-futurism idea grew from a short story into a series of novels, the way she used crowdfunding to complete the research she needed, why her discovery of my Science Fiction Age magazine means I bear the responsibility for all she’s done since, how an online writing community gave her the confidence to be a writer, the advice from Samuel R. Delany she embraces the most, why she set aside her goal of becoming an opera singer and decided to become a writer instead, the reason there are so many female monsters in Greek mythology, how she blew up the Internet with her “Stop Reading White, Straight, Cis Male Authors for One Year” challenge, her extremely strong opinions about Steven Moffat’s version of Doctor Who, and much more.

—  “I’ve shown this picture to people who are fashion conscious and the response almost across the board has been, “What the hell is that?”

—  “What’s with the earrings, the suspenders, the rainbow shirt, what appears to be Tardis socks, and the old man pants?”

(The references to Wesley Crusher and Mork and Mindy are about the rainbow across the shirt.)

(6) FIRST, THE BAD NEWS. This just in from James Davis Nicoll – “Sorry to Crush Your Dreams, But We’re Not Colonizing Space Anytime Soon”.

Perhaps because some of the early space hype was unconvincing when regarded with any attitude other than fanboy enthusiasm. And perhaps because there weren’t any compelling reasons (political, economic, scientific) for significant human presence beyond low Earth Orbit. We don’t need to send up squishy frail humans when we can send probes and remote-controlled vehicles .

Some readers might even now be making squinchy faces, maybe even pondering which unflattering cartoon of me to post in protest.

(8) WAY OUT WEST. LiveScience passes the word from the USAF — “US Air Force: Don’t Worry About Those Weird Lights and Booms Sunday, It’s Just a Space Ship”.

Sunday (October 7) SpaceX will try (for the first time) to land a Falcon 9 rocket on the West Coast.

If you’re in the vicinity of Vandenberg Air Force Base in California Sunday evening (Oct. 7), you might hear some strange booming and see some weird lights in the sky. But the Air Force would like you to know that there’s no need to worry; something entirely normal is going on — a rocket that heaved its way up into space will be falling back to Earth, correcting its trajectory with “multiple engine burns,” and then (if all goes well) settling comfortably back on its landing struts in the vicinity of its launch site.

Life lately in the tiny northern Minnesota town of Gilbert has resembled a scene out of an Alfred Hitchcock film. Birds, lots of birds, have been “flying into windows, cars and acting confused,” according to the city police department, which has been fielding reports from anxious residents.

“Certain berries we have in our area have fermented earlier than usual due to an early frost, which in turn has expedited the fermenting process,” Gilbert Police Chief Ty Techar explained in a statement. “It appears that some birds are getting a little more ‘tipsy’ than normal.”

Yes, having a boozy lark is nothing abnormal among the feathered set.

(10) CASTALIA HOUSE CHANGING STRATEGY. Vox Day will be pulling most of his imprint’s books from Kindle Unlimited, and will reduce the number of new fiction authors he publishes — “Why KU is killing ebooks” [Internet Archive link]

I did an analysis of our ebook sales and was surprised to discover that with 7 exceptions, Kindle Unlimited is simply not worth it even without taking potential non-Amazon sales into account. So, we’re going to be removing most of our books from KU and returning them to the Castalia House store over the next three months. By the start of the new year, most of our books will be available from all the major ebook platforms as well as our online store.

Remember, every dollar in the KU pool represents about THREE dollars removed from the ebook sales pool. And because the overall market is not growing, it is a zero-sum game.

We’re also going to reduce the number of new fiction authors we publish. Because repeated experiments have demonstrated that even the very best-selling KU novelists don’t sell very well in print, and because the success of KU puts us in a catch-22 situation with them regardless of whether they sell well through us or not, we are going to focus our efforts on strategic properties that we create, own and develop rather than those that we merely publish.

Because non-fiction a) sells well in print and b) is not popular on KU, our non-fiction publishing will continue without any change in focus or strategy.

(11) NOT THAT VOX, THE OTHER VOX. At Vox, Todd VanDerWerff asks why this had such an impact: “Russian trolls used Star Wars to sow discord online. The fact that it worked is telling.”

Maybe the Russian bots that Bay identified are all extra-governmental, built by trolls with spare time on their hands and a grudge against Lucasfilm. Or maybe Bay’s findings are yet another example of how thoroughly Russian intelligence has zeroed in on the idea that white nationalism is central to driving a wedge into American society.

If the latter is true, then what’s most unnerving about Russia’s intelligence strategy and its connection to Star Wars isn’t what that strategy says about Russia, but what it says about us.

Whomever you believe is behind movements like Gamergate and the pushback against The Last Jedi, what they reveal about America in the 2010s feels a little hard to swallow at first: At this point in history, a lot of us — and especially a lot of young, white men — are centering their identities and their senses of right and wrong on pop culture artifacts, sometimes with a near-religious zealotry. Call it “fandamentalism.”

A touch-sensitive robotic finger that can be attached to smartphones has been developed by a researcher in France.

The MobiLimb finger can crawl across the desk, waggle for attention when messages arrive and be used as an interface to control apps and games.

It can also stroke its owner on the hand, which developer Marc Teyssier said could create more personal connections.

He told the BBC people generally found the finger creepy or weird because it was so unusual, but hoped it would be “accepted” in time.

(13) KEEPING IT OFF THE TIP OF THEIR TONGUE. French language body urges alternative phrase for “fake news”. Somehow information fallacieuse doesn’t have the same je ne sais quoi; the Commission offers “infox” among the alternatives, possibly not knowing how “Fox” is Frenched in the US.

Or if that is too long-winded, CELF suggested the abbreviation “infox”, formed from the words “information” and “intoxication”.

“The Anglo-Saxon expression ‘fake news’, which refers to a range of behaviour contributing to the misinformation of the public, has rapidly prospered in French,” the commission rued.

“This is an occasion to draw on the resources of the language to find French equivalents.”

Comic book writer and artist Alex Ross talks about his artistic process, what drew him to the idea of drawing realistic versions of superheroes and explains why he doesn’t have an email.

(15) SIGN UP FOR THE ZONE. Rod Serling pitches The Twilight Zone to advertisers back in the day.