(1) COMICS PORTRAYALS. Peter David has changed his tune — “Final Thoughts on the Romani”.

So now that the dust of the convention has settled, I’ve had a good deal of time to assess my behavior regarding the Romani and my conduct during the convention. I’ve read many of the links that were sent my way and really thought about what I witnessed two decades ago back in Bucharest. And I’ve been assessing my actions during the panel that lead to all this.

After all that, I have to conclude that I’m ashamed of myself.

I want you to understand: when the Romani rep tried to shift the focus of the panel from gays and lesbians to the Romani, suddenly I was twenty years younger and the trauma of what I saw and what I was told slammed back through me. What screamed through my mind was, “Why should I give a damn about the Romani considering that the Bucharest Romani are crippling their children?” And I unleashed that anger upon the questioner, for no reason. None. There is no excuse.

But the more I’ve read, the more convinced I’ve become that what I saw was indeed examples, not of children crippled by parents, but children suffering from a genetic disorder. The pictures are simply too identical. I cannot come to any other reasonable conclusion.

At that time, HR Giger was already a successful painter whose bleak visions in a style that he termed biomechanics were widely distributed: in the form of popular poster editions that appeared in the late 1960s; in the large-format illustrated book Necronomicon, which he designed himself; and on album covers such as Emerson, Lake & Palmer’s 1973 release Brain Salad Surgery. But the project he was now working on would make him both a worldwide cult figure and an Oscar winner. Director Ridley Scott had hired Giger to create the monster in the movie Alien. So the artist went to the Shepperton Film Studios near London to realize his designs for the world of the alien with his own hand.

One painting had immediately convinced Scott to get Giger involved in shaping the alien creature: Necronom IV (1976). It shows in profile the upper body of a being with only remotely humanoid traits. Its skull is extremely elongated, and its face is almost exclusively reduced to bared teeth and huge insect-like eyes. Hoses extend from its neck and its back is dominated by tubular extensions and reptilian tails. In order to turn this painted creature into a monster for a movie, the artist had to submit it to a complex transformation. Giger developed a complete “natural history” of the alien based on the screenplay, which ultimately produced the final monster of the film. The process results in a unique mixture of fascination and disgust. Giger’s monster represents a turning point in science fiction and horror movies, to which Alien brought a deadly lifeform from space that had never been seen before.

(3) VOICES IN HIS HEAD. Andrew Liptak discusses “How writing an audio-first novella changed John Scalzi’s writing process” at The Verge.

The Dispatcher is firmly urban fantasy, which had its own particular challenges for Scalzi. Science fiction comes out of a tradition of realism, where everything is explained. “To sit there and write something and know that I’m not going to assign it a rational basis made me itchy,” he says. “Part of my brain went ‘you should try and explain this!’ It goes against everything I believe.”

Writing an audio-first story also had its challenges. “It makes you pay attention to things like dialogue where you really do want to make sure [it sounds] reasonably like humans speaking,” Scalzi says. One of the changes he made was in how he used dialogue tags such as “he said / she said,” which work in written books but aren’t necessarily useful for a listener. “It sounds like a small thing, but when someone is speaking what you’re writing, those small things add up.”

Scalzi also focused on making sure each character had their own distinctive voice.

The other day at the local newsstand, a new comic book caught my eye.  It was a brand new one from Marvel Comics, the spiritual successors of Atlas Comics, which went under late last decade.  Called The Fantastic Four, and brought to us by the creator of Captain America (Jack Kirby), it features the first superheroes I’ve seen in a long time – four, in fact!  We are introduced to the quartet in media res on their way to answer a call to assembly: Sue Storm, who can turn invisible at will; her brother, Johnny Storm, who bursts into flame and can fly; Ben Grimm, a hulking, orange rocky beast; and Dr. Reed Richards, who possesses the power of extreme elasticity.

Even if you think you don’t know him, you know him. Few in the Hollywood orbit have had greater influence; few have experienced more humiliating failure in their lifetime. Thanks in part to the biopic directed by Tim Burton, starring Johnny Depp and bearing his name, Ed Wood has become an icon of Americana.

Perhaps the purest expression of Wood’s théma—pink angora sweaters, over-the-top violence and the fraught relationships between the sexes—can be found in his unadulterated short stories, many of which (including “Blood Splatters Quickly”) appeared in short-lived “girly” magazines published throughout the 1970s. The 32 stories included here, replete with original typos, lovingly preserved, have been verified by Bob Blackburn, a trusted associate of Kathy Wood, Ed’s widow. In the forty years or more since those initial appearances in adult magazines, none of these stories has been available to the public. 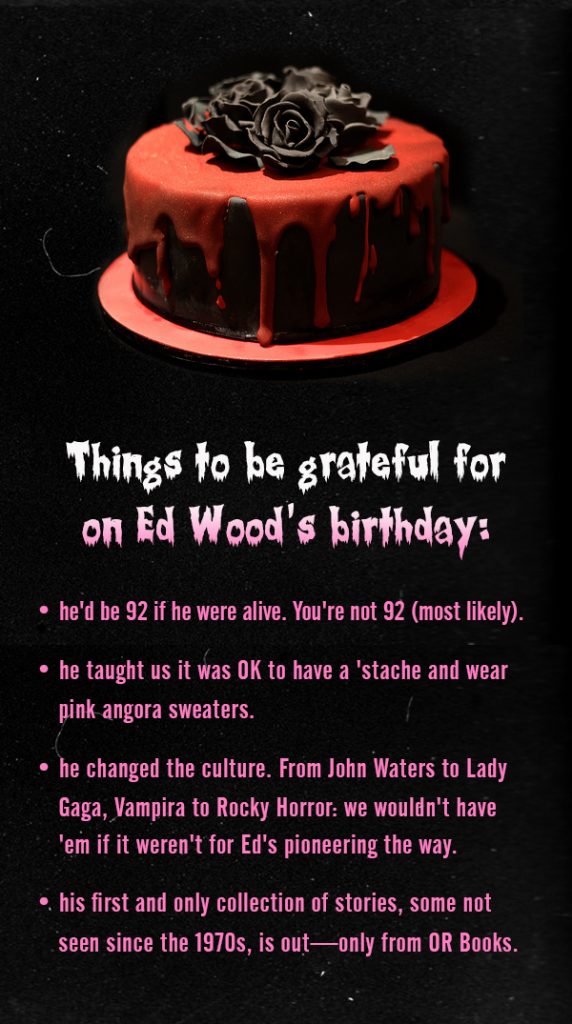 (8) SMOFCON SOUTH. Conrunners of the Antipodes, you are summoned to SmofCon South, to be held in Wellington. New Zealand December 3-4, 2016.

Come one, come all! We will be running SmofCon South in Wellington. New Zealand from December 3rd to 4th, 2016. This is run at this time to try to hook into the resources and people of SmofCon 34, taking place the same weekend in Chicago, USA. A Smofcon is a convention about running conventions. It’s an excellent opportunity to meet other con runners, and to learn from them. SmofCon South will be primarily focused on running Worldcons or other large events. This event will be very valuable for people who have volunteered to help run a New Zealand Worldcon. We want to encourage you to come along and meet other people you may be working with, and gain insights and knowledge about how Worldcons work.

Smofcon South will be held 3-4 December (with a meetup dinner for those who arrive on Friday).

We are skyping in with Smofcon 34, being held in Chicago, for a few sessions. Breaking News: Also a hook up with Japan.

(9) MORE RADCHAAI LOOT. This charm bracelet is perfect for the Ancillary fan in your life. Bring the Fleet Captain, Translator, First Lieutenant, and themes of the series, like tea, magic bullets, spaceships, and music into your daily life with this charm bracelet.

(10) BETTER USE OF TIME. Steven H Silver writes, “Last night, instead of watching the debate, Elaine and I watched the Gene Wilder/Richard Pryor movie See No Evil, Hear No Evil. A couple of early scenes are set at a newstand run by Wilder’s character. In the background I could make out Frederik Pohl’s The Coming of the Quantum Cats, Greg Bear’s The Forge of God, and Piers Anthony’s Faith of Tarot.” 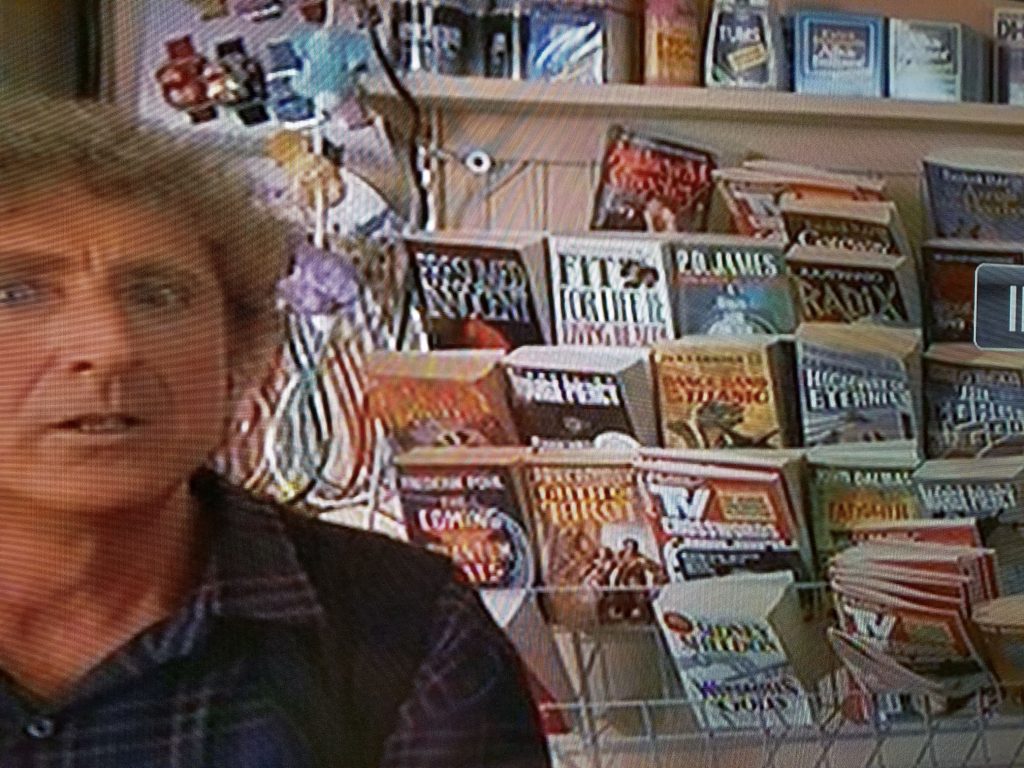 (11) HE PEEKED. One of Satchel Paige’s rules to live by was, “Don’t look back. Something may be gaining on you.” Dave Langford didn’t follow Satchel’s advice when he had a strange feeling he was being followed….

For a moment, when I saw the part-obscured back of a coffee-vending van in Reading town centre, I felt F770 was following me around. But it was all a quaint illusion.

[Thanks to Dave Langford, Chip Hitchcock, JJ, Steven H Silver, Jeffrey Smith, and John King Tarpinian for some of these stories. Title credit goes to File 770 contributing editor of the day Bill.]