(1) Watch out for bi-Klingual train conductors!

A Trek-referencing TV commercial is nominated for a national award in Austria reports Nina Horvath at Europa SF.

What is it all about? Two men dressed up as Klingons go by underground railway (yes, it is the underground railway, although it goes above-ground in this scene) in Vienna, when they find out that a ticket controller is around. As they haven´t bought a ticket, they decide to confuse the ticket controller (by the way a pretty blonde woman) with Klingon language. But she also replies to them in Klingon and seems to know enough about Klingon culture, to call them “dishonourable worms”. What follows is an advertisement for the “Volkshochschule Wien”, a school where adults can take several courses, e.g. on languages. (Probably also Klingon …?)

(2) Richard C. White, in “World Building 101: The Village” at Black Gate, vents about cliché adventurers who return to the local village to spend their newfound treasure.

If you’re like me, that scene sounds awfully familiar. It’s appeared too often in bad fantasy stories, bad fantasy movies, and WAY too many role playing games. “But Rich,” you say, “the party has to have somewhere to spend their treasure. Otherwise, there’s no point in giving it out?”

And my response is, “You’re absolutely right, but for the wrong reasons.” Let me explain what I mean. (Good, otherwise this would be a darn short blog entry – Editor).

The biggest problem is, that scene above should be taking place in a large town or at least a small city. A medieval (or pseudo-medieval) village is not going to have jewelers or places to sell magic items (if you’re doing that kind of fantasy). The tavern is not going to have a bevy of barmaids and taverns do not traditionally sell food — that’s what the inn was for (if there even was an inn). And why in heaven’s name would you have a village that close to a dungeon populated by evil creatures anyway? Most sensible villagers would have packed up and moved to safer places years ago (if they hadn’t all been killed in their sleep by the monsters). No, this village in the scenario above seems to have only one purpose — to provide adventurers with a place to stay while they’re off looting the local dungeon de jure. Not only is that not realistic — it’s boring.

[Forrest J] Ackerman founded a cult magazine, Famous Monsters of Filmland, and, more lucratively, became an agent for horror and science-fiction writers. He crammed an eighteen-room house in Los Feliz with genre memorabilia, including a vampire cape worn by Bela Lugosi and a model of the pteranodon that tried to abscond with Fay Wray in “King Kong.” Ackerman eventually sold off his collection to pay medical bills, and in 2008 he died. He had no children.

But he had an heir. In 1971, Guillermo del Toro, the film director, was a seven-year-old misfit in Guadalajara, Mexico. He liked to troll the city sewers and dissolve slugs with salt. One day, in the magazine aisle of a supermarket, he came upon a copy of Famous Monsters of Filmland. He bought it, and was so determined to decode Ackerman’s pun-strewed prose—the letters section was called Fang Mail—that he quickly became bilingual.

Del Toro was a playfully morbid child. One of his first toys, which he still owns, was a plush werewolf that he sewed together with the help of a great-aunt. In a tape recording made when he was five, he can be heard requesting a Christmas present of a mandrake root, for the purpose of black magic…

(4) The Martian remains in first place at box office, however, several other genre movies failed on their opening weekend.

Four new films, including Paranormal Activity: The Ghost Dimension and Vin Diesel’s The Last Witch Hunter, crowded into theaters this weekend and were swiftly pulverized and left for dead.

And John King Tarpinian says he saw only seven people in the audience at a showing of Bill Murray vehicle Rock The Kasbah.

(5) On Reddit — Author Becky Chambers will be joining us in SF Book Club to discuss The Long Way to a Small, Angry Planet on October 28!

Details are yet to be fully worked out, but will look something like the rest: she’ll come in the morning to post a thread where we can ask questions, then come back in the afternoon/evening to answer the posted questions and interact with folks for a while.

(6) David K.M. Klaus questions the taste of using a formation of stormtroopers on the Great Wall of China to promote the next Star Wars film.

The Guardian: See video of 500 stormtroopers lining up the Great Wall of China in a #StarWars promotional campaign. https://t.co/gMWbHga8tS

Yeah, this is cute — except that it looks just like the mass exercise and marching China used to have and North Korea still does — and “Imperial Stormtroopers”, had they existed, would have been used to rout the students and destroy the statues of the Goddess of Democracy in Tianamen Square in 1989.

Today “Tank Man” blocks the path of an AT-AT walker.

Thanks, Disney! Unfrozen, conventionally-buried-at-Forest-Lawn Unca Walt is a veritable whirligig in his grave right now.

(7) John Hertz responds to the notice in the October 23 Scroll about the passing of Harriett Klausner:

Of more immediate interest to us, Klausner was a pillar of Barry Hunter’s reviewzine Baryon, which came in the mail (Ned Brooks R.I.P.) for years.  She read and wrote fluently and much, and wherever I formed an opinion of my own, well; she had few companions, perhaps no equals.  I don’t believe I’ve seen a later issue than B 129 in 2014, but that if accurate is hardly conclusive in Fanzineland.

(8) I received this link to “The 40 Most Awesome Supergirl Covers” at Comic Book Resources with the admonition “For Historical Reference ONLY.” I’d say the covers are pretty tame – it’s CBR’s own Supergirl header that tends toward the cliché. 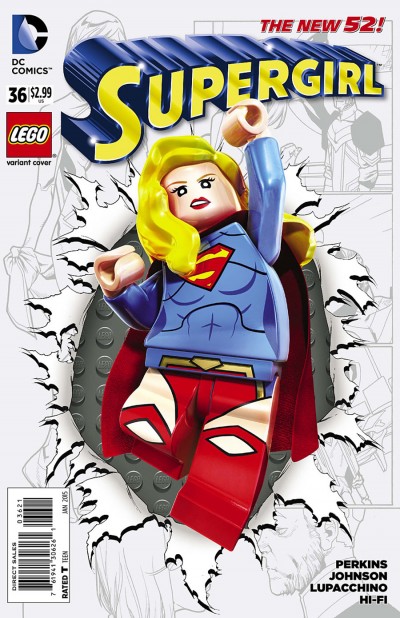 The evidence is right there in this trailer and the previous two. The desert planet of Jakku does not seem to have benefited all that much from the three-decades-old Rebel victory. Daisy Ridley’s character, Rey, appears to be a scavenger, and the planet is just littered with Imperial wreckage. If that hasn’t been cleaned up after 30 years, it’s a good sign that the Rebel Alliance has failed at statebuilding.

He also wonders why they didn’t revive the Senate or let the people know that Darth Vader switched sides minutes before he died.

(10) Time to move to Canada? Netflix will stream Star Wars: The Force Awakens there in 2016.

Fortuitously for Netflix Canada subs, the company’s deal with Disney started with 2015 releases after the previous agreements for the pay-TV window with Corus Entertainment and Bell Canada expired. A Netflix rep confirmed “Star Wars: The Force Awakens” is slated to come to the service in the country; under the terms of the deal, that will occur approximately eight months after the movie leaves theaters.

(11) Political scientists should also be looking at the world’s newest nation – it’s in a remote corner of Utah.

There is a four-acre piece of land in northwestern Box Elder County that very few people know about. Even fewer people recognize it as what it’s meant to be — its own country.

A decade ago, Zaq Landsberg, a man from New York, bought the land online with a unique goal in mind.

“The conceptual goal is I want it to become a real country,” Landsberg said. “I mean, that goal is not going to happen. It’s impossible, but going through the motions, (I’m) trying to make that happen.”

The area is known to Landsberg as the Republic of Zaqistan, and he is its president….

Zaqistan has its own flag, a border patrol gate, a supply bunker, a robot sentry that guards the land and even official passports.

“Zaqistan works the best, I think, when it’s wedged up against the real world, and when the passports circulate,” Landsberg said.

The passports look and feel real. You can even get them stamped when entering and exiting his land. 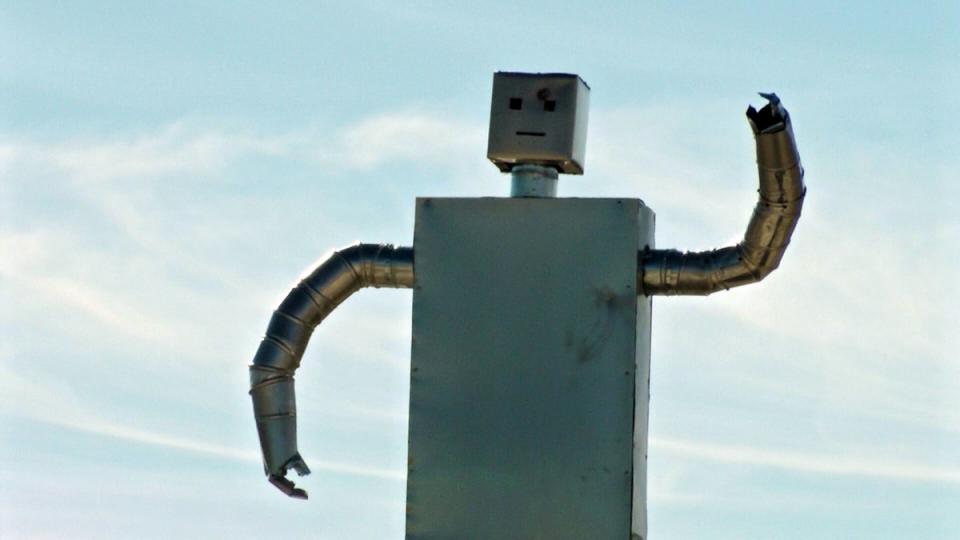 (12) What, wait, what? William Shatner was The Chairman on the original Iron Chef USA?

There’s a short clip from an episode on YouTube. Chairman Shatner mugs for the camera starting at about :10.

(13) Ann Leckie fans have reported a great disturbance in the force!

@ann_leckie @UOJim So is having your protagonist wake up. Or that's what I've heard.

@kiplet @UOJim I did that too, actually. 😀 Guess I'm a complete incompetent.

Also singular they is grammatically correct & anyone who says otherwise can stuff it. And go ahead & split infinitives with abandon.

(14) While we’re in the midst of this Ann Leckie festival, take a listen to Comedrinkwithme’s musical rendition of “It All Goes Around”.

[Thanks to Martin Morse Wooster, Gregory Benford, Will R., Jim Henley, John King Tarpinian for some of these stories. Title credit goes to File 770 contributing editor of the day Daniel Dern.]

269 thoughts on “Pixel Scroll 10/25 The Shapeshifting Starship Captain Who Shouted “Fromage!” At The Heart Of The World”