(1) The Galactic Journey blog is written as the day-to-day experiences of an sf fan living 55 years ago. Last week The Traveler covered the final Nixon-Kennedy debate and the first episode of The Twilight Zone’s second season.

Science fiction is not prediction.  It is extrapolation.  No one can see the future, but a gifted writer can show you, dramatically, what will happen “if this goes on.”

It’s no surprise that science fiction writing has enjoyed a boom since 1950.  Never has our world been on the brink of so many exciting and dangerous potentialities.  On the positive side: space travel, automation by computers and robots, atomic energy.  On the negative side: pollution, global warming, and atomic annihilation….

On the other side of the coin, we have Mack Reynolds’ Russkies Go Home!, which appeared in this month’s (November 1960) Fantasy and Science Fiction.  Mr. Reynolds reportedly just returned from a trip behind the Iron Curtain, which explains the multitude of Russia-related stories he’s recently turned out.  Clearly, the trip impressed the writer, as the stories all posit a Soviet Union that fulfills Senator Kennedy’s nightmare prophecies by surpassing the United States in prosperity by 1970.

A judge granted a protective order against a warlock on Wednesday, spelling relief for the Salem witch who accused him of harassment.

The two squared off in court before a Salem District Court judge, who granted the protective order to witch priestess Lori Sforza. She had accused self-proclaimed warlock Christian Day of harassing her over the phone and on social media over the past three years.

To not lose the plot, I invite you to contemplate the little old lady who swallowed a fly.

Your character, in the same way, starting with a problem on which they act in what has to be a somewhat rational manner (unless it’s one of my refinishing mysteries) and where the result backfires horribly, must engage in attempting ever bigger solutions (to bigger problems) and having them blow up even bigger.

(5) Allen Steele has a comeback for Nancy Fulda’s “What To Expect When You Start An Internet Kerfuffle” at the SFWA Blog.

There is a solution to all this: don’t blog.

Really, you don’t need to do so, regardless of the current conventional wisdom that says a writer must relentlessly promote himself on the web. Quite a few well-established writers don’t, and their literary careers are just fine, thank you. If you visit the bookstore, you won’t find THE COLLECTED BLOGS OF MARK TWAIN or DUNE BLOGGER by Frank Herbert or ASIMOV BLOGS AGAIN, and there may be a reason for this.

And if getting yourself in trouble for your internet posts isn’t reason enough, then consider this: over the years, I’ve noticed that — with very few exceptions — an author’s literary output decreases in inverse proportion with the amount of time and energy he or she spends on the Internet. And no one is going to pay you for what you post on your blog or even care a month or so later…unless it’s something that may adversely effect your literary career.

The Internet is not your friend. So don’t blog.

(7) Motherboard airs its outrage that “Someone in Alabama sold a priceless lunar rover for scrap metal”.

During the Apollo missions, NASA only made a handful of lunar rovers. Three of them are still sitting on the surface of the moon. One of them is at the Air and Space Museum in Washington DC. And another was recently smashed into bits in an Alabama junkyard.

According to documents acquired by Motherboard as part of a Freedom of Information Act request, a priceless lunar rover prototype designed for the Apollo missions was sold to a junkyard in Alabama for scrap metal sometime last year. Specific names and details are redacted in the documents, which include internal emails and reports by NASA’s Office of the Inspector General, the agency responsible for investigating and recovering lost and stolen NASA property.

(8) “He had a right to shoot at this drone, and I’m gonna dismiss this charge”, a made-up quote, headlines Eugene Volokh’s latest installment of “The Volokh Conspiracy” for the Washington Post. Kentucky jurisprudence is notorious inside the Beltway, therefore it’s surprising Volokh reaches the end of his column without having made much legal headway against the fellow who shot down a drone flying through his property.

(9) Via Bayou Renaissance Man, another article on model masculinity —

According to Country Life magazine in the UK, a gentleman’s traits include such gems as:

(10) James H. Burns found a YouTube video of film footage from the costume contest at Phil Seuling’s 1973 Comic Convention, at the Commodore Hotel, in New York. He identified many science fiction friends in the proceedings.

There are just audience shots for the first two minutes, and then footage of the costumed revelers gathered together. That’s the legendary Joan Winston in the midriff baring dress and the star-spangled cape–Joan was the CBS and ABC executive key to helping run the early STAR TREK conventions, who later became an author (and an agent), and also helped contribute to MANY science fiction events. Thomas Anderson, chairman of a Lunacon or two, and a World Fantasy Convention (and another original Trek Con veteran),appears with his girlfriend (were they married yet?) Dana L. Friese (soon to have more fame in fandom as Dana L.F. Anderson) as Elric.  Costume con favorite Angelique Trouvere (aka “Destiny”) is there as Vampirella (with Heidi Saha as the young Vampi).  Long time film actor, and science fiction fan, Teel James Glenn is there as Flash Gordon (and is that Cortland Hull as Ming?) Soon-to-be-veteran comics pro Jack Harris is Two-Face, Patrick Daniel O’Neill hams it up as Captain Marvel Jr…. (Amazngly, Dave Burd,  future cast member the cult TV comedy program THE UNCLE FLOYD SHOW, is also in attendance, as THE T.H.U.N.D.E.R. AGENTS’ Dynamo.) The sound kicks in at about 4:05, and then suddenly one is back in July, 1973!  I find this particularly amazing, because I would become friends with many of these folks, just two-and-a-half years later!  (Heck, I’d be helping to run the programming at some of these comic cons, just a little while after that!)  Although I couldn’t spot any familiar faces in the audience, some among the File 770 faithful might be able to recognize someone–and it’s still a great record of just what a comic con crowd often looked like, even during the next d=few seasons.  (The Andersons, and Joanie, perform a skit, at around 10:10.)  It would be interesting who else can identified here, among the costumed cohorts!

For Andrew Huff, lover of horror films, the 75 steps in Washington, D.C., where Father Karras plummets to his death in “The Exorcist” are his Lincoln Memorial. “I go to the steps all the time,” he said, “and when visitors come to Washington, I always take them there.”

All that was missing was a special tourist designation. And on Friday, largely through Mr. Huff’s efforts, that oversight will be rectified. The eerie stairway will be commemorated with an official city plaque — even signed by Mayor Muriel Bowser — declaring them “The Exorcist Steps.”

I wonder where you go in that neighborhood for a nice bowl of pea soup.

(12) Ray Bradbury manuscripts going under the hammer! And some nice artwork. You have until tomorrow to bid on these items in the latest Nate D. Sanders auction. 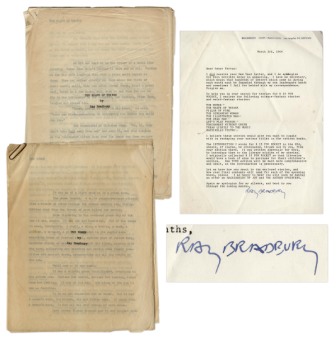 Ray Bradbury typed letter signed, plus two original typed manuscripts, given by Bradbury to Fracisco Porrua, who edited Bradbury’s works for the Spanish language population. Accompanying the typed manuscripts for ”The Women” and ”The Shape of Things”, Bradbury writes to Porrua on 3 March 1964 on his personal stationery: ”…I have no secretary, which means that hundreds of letters which come in during each month must be funneled through my own inadequate hands and sometimes I fall far behind with my correspondence. Forgive me. To help you in your search for stories for R IS FOR ROCKET, I enclose the following science-fantasy stories and weird-fantasy stories…” Bradbury goes on to list 10 stories, including ”The Women” and ”The Shape of Things” and then continues, ”…I believe these stories would give you much to juggle with in reshaping your various titles in the various books…” Bradbury continues, regarding the introduction for ”R Is for Rocket” and writes, ”…I am happy to hear you will soon be making an offer on MACHINERIES OF JOY and THE ANTHEM SPRINTERS…[signed] Ray Bradbury”. Both manuscripts are typed on thin tracing paper which was placed behind regular sheets of paper. ”The Women” is 16 pages and ”The Shape of Things” is 26 pages. Manuscripts and letter measure 8.5” x 11”. Lot is in very good condition. 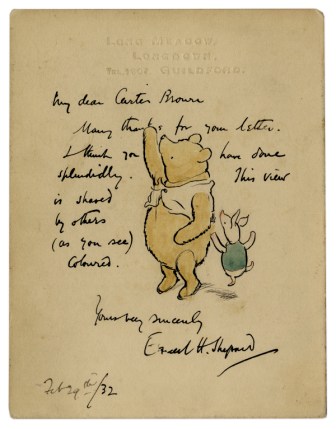 Ink and Watercolor Drawing by E.H. Shepard of Winnie-the-Pooh and Piglet

Beautifully rendered watercolor and ink drawing of Winnie-the-Pooh and Piglet by E.H. Shepard, the illustrator chosen by A.A. Milne to bring his literary characters to life. Here, Shepard draws Pooh and Piglet upon a letter to his agent, allowing the characters to express his feelings of gratitude and joy. In the autograph letter signed, dated 29 February 1932, Shepard thanks his agent for a letter, writing that he has ”done splendidly” and that ”this view is shared by others”. To emphasize his feelings, Shepard draws Winnie-the-Pooh reaching up and Piglet excitedly jumping at his side. Shepard must have been very pleased with his agent, as he very seldom drew his most famous characters; this drawing, done early in the illustrator’s career and just a few years after the Pooh series, is a rare exception. Single page is written from Long Meadow, Guildford. Light uniform toning and mounted to card. Overall in very good to near fine condition. With provenance from Sotheby’s.

[Thanks to Andrew Porter, David Doering, James H. Burns, and John King Tarpinian for some of these stories. Title credit belongs to File 770 contributing editor of the day Brian Z.]