Repurposing existing Space Ghost images from the original cartoons, Lazzo created the first animated late-night talk show in 1994. Operated in tandem with Keith Crofford, a fellow Southerner with whom Lazzo shared an office as well as seemingly a brain, the show boasted a premise that was somehow both simple and endlessly, mutably ridiculous. Now retired from the business of fighting intergalactic evil, Space Ghost (real name: Tad Ghostal) and a support staff consisting of his imprisoned enemies Zorak (anthropomorphic mantis/bandleader) and Moltar (gravel-voiced lava man/director) flies face-first into show business, interviewing pop-culture luminaries through a monitor screen lowered into the chair where a guest would normally sit. Interviews with the celebrities involved were filmed separately, in largely improvisational fashion, then combined with the cartoon characters’ dialogue — often producing results diametrically opposed to the context of the original questions.

Congratulations on having a short story accepted for publication in the anthology Rusted, Lusted, Busted: Contemporary Southern Fiction, edited by myself and my good buddy Richard Head!

Richard and I, both of us straight cisgender nominally Christian white males, have put a shit-ton of work into this anthology, mostly over beers and hot wings at the local Tilted Kilt while our wives assumed 100% of the burden of watching our kids. Now this baby we’ve labored over is out and it’s time to party!

That’s why we’re hosting an all-male, all-white panel tomorrow at Lily White Books in Mansfield, SC, to celebrate the anthology’s release and your contributions to it. We’d love it if some of you could come be part of the panel!

Given the twelve-hour notice, however, along with our inability to compensate you in any way, and our unwillingness to compensate you even if we could, I completely understand that most of you — including all our woefully underrepresented contributors who do not identify as heterosexual white men — will not be able to participate in this seminal event, except perhaps as late-arriving, paying audience members ($5 at the door).

For each one of us, there is a book, or a series, that hooked us on genre fiction. Maybe it was the first SF book you read, maybe you had to read a couple before you hit the one that hooked you.

Tell me what book got you to become a fan of SFF, and why?

(4) The author explains it all to you in “The Big Idea: Ann Leckie” on Whatever.

So instead of going over the AJ stuff again–what is a person? Who is anybody anyway?–I instead give you the Ancillary FAQ. These are all questions I’ve actually gotten (or oveheard) at one time or another.

Q: How can you possibly wrap the story up in one more volume? There’s too much going on; I don’t see how you could manage it.

A: The easiest way for me to answer that is to actually do it. Which I have, and you can see the answer for yourself wherever fine books are sold. Or at a library near you. I love libraries. They’re awesome.

Q: Will there be more books after this one?

A: There will be more books, and certainly more books in this universe, but not books about Breq. Nothing against her, I’ve had a lovely time these past three books, but it will be nice to do something different.

(5) Brian Fung’s article for the Washington Post, “’The Martian,’ NASA and the rise of a science-entertainment complex”, looks at the extensive cooperation between NASA and the producers of The Martian, and notes that NASA hopes to get more out of this film than other projects with which it has extensively cooperated (like the Transformers movies).

When Navy flyboy Tom Cruise got too close for missiles and switched to guns in the spring of 1986, what seemed like an entire nation got up to follow him. Military recruitment booths popped up in theaters, eager to attract young Americans who’d just seen Maverick tell Charlie about the inverted dive he’d done at four Gs against a MiG-28.

To say “Top Gun” was a boon for recruitment would be an understatement. That year, the Navy signed up 16,000 more people than it did the entire year before, according to the author Richard Parker, writing for Proceedings, the U.S. Naval Institute’s monthly magazine. Other estimates suggest that among naval aviators alone, this spike in registrations amounted to growth rates of 500 percent….

With “The Martian,” NASA has the same opportunity defense officials had in the 1980s, only now with additional social media superpowers. By highlighting everything from the real-world technologies depicted in “The Martian” to explaining the science behind Martian dust storms to calling on young women to take after the fictional Ares III mission commander, Melissa Lewis, NASA’s hoping to turn moviegoers into the nation’s next generation of scientists, technologists and the other all-around bad-ass eggheads celebrated in the film. In the run-up to the movie’s release, NASA even made a major announcement about the discovery of liquid water on Mars that some believed was simply too conveniently timed to be a coincidence.

(6) The Motherboard’s Jason Koebler eschews any idea of a jolly NASA/media alliance from the very first words in his post “NASA Wants Astronauts to Use Mars’s Natural Resources to Survive”.

Humans have thoroughly wrecked Earth’s environment, now it’s time to move on to using the natural resources of another planet.

Fresh off the discovery of flowing, liquid water on Mars, NASA said Wednesday it wants ideas for how to best exploit the natural resources of the Red Planet for human survival…. NASA plans on giving away modest $10,000 and $2,500 prizes to people who can come up with potentially viable ideas for Mars resource use.

(7) Todd VanDerWerff asked the editors of The Best American Science Fiction and Fantasy 2015 to name “10 of the best science fiction and fantasy short stories ever” for Vox.

(9) “Superman’s Getting a Brand New Secret Identity” and io9 has the name. Spolier warning!

Spoilers ahead for today’s Action Comics #45!

Now that Superman (and Clark) are taking the heat for Lois’ story leaking his alter-ego, Kal-El has had to go into hiding and lay low. Fired from the Daily Planet when his co-workers discover they’d been in grave danger simply by being in Clark’s vicinity all the time, and facing persecution from the Government, Superman has vanished… and replaced himself with a mild-mannered trucker.

Yes, Clark Kent is now Archie Clayton! It doesn’t quite have the same ring to it, does it?

(11) Unlike many other original Ghostbusters cast members, Rick Moranis turned down the offer to appear in the reboot.

When the new all-female Ghostbusters reboot arrives in theaters next summer, nearly all the living actors from the original 1980s films — Bill Murray, Dan Aykroyd, Sigourney Weaver, et al. — will be doing cameos. But not Rick Moranis, who was offered the chance to appear in a walk-on role but turned it down. “I wish them well,” says the 62-year-old comedic legend, who’s so stunned by the outcry over his absence in the film that he decided to grant a rare interview with THR. “I hope it’s terrific. But it just makes no sense to me. Why would I do just one day of shooting on something I did 30 years ago?”

Yes! That is a melon baller! Despite my never buying shoes for her, my wife purchased this for me when she saw it in a store. Because Modern Manhood ACHIEVED!

Now all I need is some Kenneth Cole oxfords and a crying pillow, and I’m set. 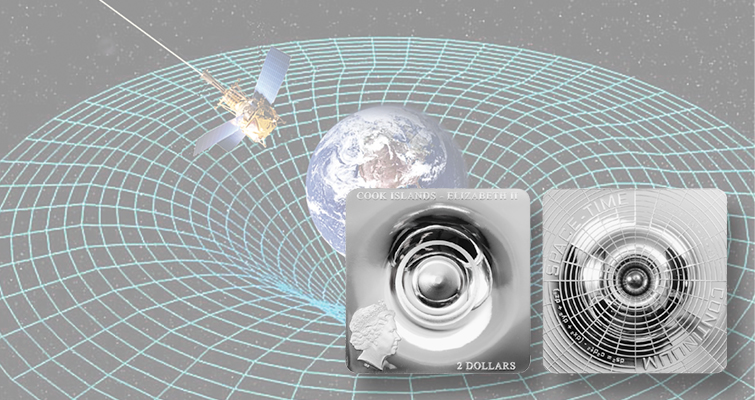 A 2015 $2 coin in the name of Cook Islands visibly explains the relationship between space and time, as created by scientist Hermann Minkowski. Building on Albert Einstein’s 1905 Special Theory of Relativity, Minkowski suspected the existence of a fourth dimension (time, in addition to height, width and length), in which space and time are connected geometrically, and he created a diagram illustrating the connection.

The Prooflike half-ounce .999 fine silver $2 Space–Time Continuum coin was issued by Coin Invest Trust. It was struck by B. H. Mayer‘s Kunstprägeanstalt Mint in Munich, Germany.

The reverse of the coin depicts the Minkowski diagram, a geometric illustration of the formula of special relativity, which is engraved in one of the diagram’s columns together with the inscription SPACE–TIME CONTINUUM. The center of the high-relief coin is marked with a magnetic sphere, which can be removed.

The obverse, whose shape is a mirror or inversion of the reverse, displays the Ian Rank-Broadley portrait of Queen Elizabeth II, the issuing nation and the face value.

Einstein incorporated Minkowski’s ideas into his general theory of relativity in 1915, six years after Minkowski died.

A pupil is a hole, it can't have a color. The iris conveys the color of the eye.

You win this round, copyeditor.

[Thanks to JJ, Martin Morse Wooster, Rob Thornton and John King Tarpinian for some of these stories. Title credit belongs to File 770 contributing editor of the day Will R.]