(1) DOCTOR WHO AT DUBLIN 2019 BLOG. Nicholas Whyte explains why it’s a challenge to write about “Doctor Who in Ireland”, then fannishly does so anyway —

23 November 2018 marks the 55th anniversary of the first episode of Doctor Who. It is a sad fact that not a single second of TV screen time on the show, or any of its spinoffs, has been set in Ireland. Indeed, the Doctor has spent more televised time in Hungary than on the Emerald Isle (special prize if you know what story I am referring to). A couple of confused characters do wonder if Gallifrey, the home planet of the Time Lords, may be in Ireland, but that’s as close as we get.

(2) A SHURI THING. Issue 2 of Nnedi Okorafor’s Shuri comics for Marvel was released November 21. This is one of the variant covers, by Afua Richardson.

One of the variant covers (this one by the amazing @AfuaRichardson) for Shuri Issue #2, due out on Wednesday. pic.twitter.com/AHGHGt12Ad

A member of Hollywood royalty has a secret role in Warner Bros.’ upcoming Aquaman.

None other than Oscar-winner Julie Andrews has a previously unannounced part to play in the superhero adventure, EW has learned exclusively.

The Sound of Music actress voices the mythic Karathen, an undersea creature that holds the key to Arthur Curry’s (Jason Momoa) quest to unite the Atlantean and surface worlds.

Andrews hasn’t appeared in a film in nearly a decade, but has lent her unmistakable voice to other big screen projects over the last decade (such as Despicable Me 3 and Shrek Forever After) and appeared in the Netflix series Julie’s Greenroom.

The much-anticipated sequel to the critically acclaimed, global box office phenomenon that started it all, “The LEGO® Movie 2: The Second Part,” reunites the heroes of Bricksburg in an all new action-packed adventure to save their beloved city. It’s been five years since everything was awesome and the citizens are facing a huge new threat: LEGO DUPLO® invaders from outer space, wrecking everything faster than they can rebuild. The battle to defeat them and restore harmony to the LEGO universe will take Emmet, Lucy, Batman and their friends to faraway, unexplored worlds, including a strange galaxy where everything is a musical. It will test their courage, creativity and Master Building skills, and reveal just how special they really are.

A Chinese court’s 10-year jail term for an author of a homoerotic book found guilty of profiting from selling “obscene” literature has been met with disbelief among some internet users who question how the crime could warrant so severe a punishment.

The author, surnamed Liu, was found guilty on Oct. 31 by Wuhu county court in eastern Anhui province after she self-published a book that “obscenely and in detail described gay male-male acts”, according to state media.

…Pornography has long been illegal in China, but in recent years, the Communist Party has intensified efforts to clear away what it sees as inappropriate content, introducing new legislation, rewards and punishments to help its aims.

Authorities on Saturday launched a campaign to “eradicate pornography and illegal publications” by offering heightened rewards of up to 600,000 yuan for reporting banned content to the police, starting from December.

The Congressional-Executive Commission on China (CECC) is an independent agency of the U.S. government which monitors human rights and rule of law developments in the People’s Republic of China. It was created in October 2001. Their post on the topic asserts “Freedom of Expression in China: A Privilege, Not a Right”:

Chinese officials have stated that anyone wanting to publish their opinions may submit their article or book to a government-licensed publisher, but if they are unable to find a licensed publisher, then the only way they can legally exercise their constitutional right to freedom of publication is to “enjoy their works themselves, or give copies to friends and family.”

While homosexuality hasn’t been classified as a crime since 1997, same-sex relationships are still banned from the small screen and online streaming platforms. And the government seems to have a bone to pick with pornography, as authorities recently upped the monetary reward given to those who report such “illegal” content to a maximum of more than $86,000 (U.S).

… Earlier this week the Cyberspace Administration of China (CAC) said it had “cleaned up” 9,800 accounts on Chinese social media platforms which it accused of spreading “politically harmful” information and rumours.

Millions of Chinese nationals have been blocked from booking flights or trains as Beijing seeks to implement its controversial “social credit” system, which allows the government to closely monitor and judge each of its 1.3 billion citizens based on their behaviour and activity.

The system, to be rolled out by 2020, aims to make it “difficult to move” for those deemed “untrustworthy”, according to a detailed plan published by the government this week.

It will be used to reward or punish people and organisations for “trustworthiness” across a range of measures.

A key part of the plan not only involves blacklisting people with low social credibility scores, but also “publicly disclosing the records of enterprises and individuals’ untrustworthiness on a regular basis”.

The plan stated: “We will improve the credit blacklist system, publicly disclose the records of enterprises and individuals’ untrustworthiness on a regular basis, and form a pattern of distrust and punishment.”

For those deemed untrustworthy, “everywhere is limited, and it is difficult to move, so that those who violate the law and lose the trust will pay a heavy price”.

The credit system is already being rolled out in some areas and in recent months the Chinese state has blocked millions of people from booking flights and high-speed trains.

According to the state-run news outlet Global Times, as of May this year, the government had blocked 11.14 million people from flights and 4.25 million from taking high-speed train trips.

The state has also begun to clamp down on luxury options: 3 million people are barred from getting business class train tickets, according to Channel News Asia.

(The Global Times is a daily Chinese tabloid newspaper under the auspices of the People’s Daily newspaper, focusing on international issues from the Chinese government’s perspective. Channel News Asia is a pay TV news channel based in Singapore.)

(7) ROEG OBIT. Nicholas Roeg (1928-2018), director of The Man Who Fell to Earth and the Roald Dahl based The Witches; photographer on Corman’s The Masque of the Red Death and Truffaut’s Fahrenheit 451 — “Nicolas Roeg obituary: From tea-maker to director’s chair”.

‘His breakthrough came in 1964 when he worked as a cinematographer on Roger Corman’s film The Masque of the Red Death, an adaptation of the Edgar Allan Poe short story, starring Vincent Price.

Corman was gaining a reputation for spotting and developing new talent and boosted the careers of other future directors including James Cameron and Martin Scorsese.

He also worked on Francois Truffaut’s Farenheit 451, which was notable for the bright hues in which it was shot, and on John Schlesinger’s 1967 adaptation of the Thomas Hardy novel, Far From the Madding Crowd.

(10) WHOVIAN COMPLAINT FORM. The popular meme has been given an update to include the latest gripes: 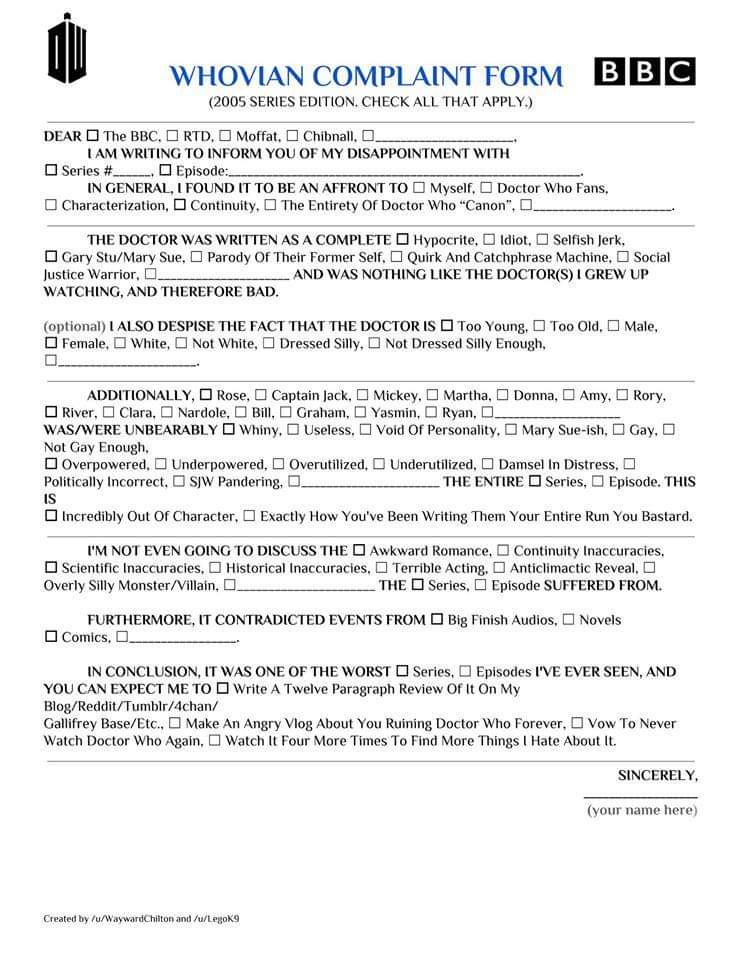 (11) LAST OF THE INKLINGS. Weekly Standard profiles “The Steward of Middle-earth”, Christopher Tolkien.

…Now, after more than 40 years, at the age of 94, Christopher Tolkien has laid down his editor’s pen, having completed a great labor of quiet, scholastic commitment to his father’s vision. It is the concluding public act of a gentleman and scholar, the last member of a club that became a pivotal part of 20th-century literature: the Inklings. It is the end of an era.

All of this would have come as a great surprise to 24-year-old J.R.R. Tolkien as he scrambled down the lice-ridden trenches of the Somme. Catching trench fever removed Tolkien from the front lines and probably saved his life. While on sick leave, he began a draft of The Fall of Gondolin. Now, 102 years later, it sits on the shelves of every Barnes & Noble in the country.

The first draft of The Fall of Gondolin was begun during the Great War; the final incomplete version is dated 1951. Both versions are included in the newly published book, along with fragments and working drafts. While the story itself is good, its true weight is as the final piece of the Tolkien legendarium, a project an entire century in the making.

It is work that has spanned Christopher Tolkien’s life….

(12) HISTORY OF DUDS. This BBC video highlights “The museum that embraces failure” – of mostly-tech ideas that didn’t catch on. My fellow vintage Filers will remember some of them.

(13) EGGSACTLY. Yahoo! Entertainment gets all the free-range references: “From ‘Frozen 2’ to ‘Star Wars’: Here’s your guide to all the Disney Easter eggs in ‘Ralph Breaks the Internet'”. BEWARE SPOILERS.

As the title suggests, the animated sequel Ralph Breaks the Internet finds everyone’s favorite fictional ’80s video game character, Wreck-It Ralph (voiced by John C. Reilly), careening through the online world like — what else? — a wrecking ball. But even as the new film lightly satirizes internet giants like eBay and Google, many of its best gags are aimed directly at its parent corporation, the Walt Disney Company.

(14) THE UNITED STATES SPACE PROGRAM CINEMATIC UNIVERSE. If the Marvel and DC Cinematic Universes are by design, there are others you might claim have been created by coincidence. Patrick Willems takes us on an idea-trip through some of “The Original Cinematic Universes.”

In February 1904, a short news item in Nature marked a monumental event. It recorded the achievements of the American brothers Orville and Wilbur Wright and the contraption that they had launched from a hill in North Carolina a couple of months earlier. “They now appear to have succeeded in raising themselves from the ground by a motor-driven machine,” Nature stated. It was, “the first successful achievement of artificial flight”. That first trip lasted barely 12 seconds.

Nearly 115 years later, Nature reports on another historic brief flight, which this time lasted 8–9 seconds. Researchers at the Massachusetts Institute of Technology (MIT) in Cambridge describe an aviation breakthrough that will draw inevitable comparisons to that wobbly and fragile first journey by air. The aeroplane is powered by a battery connected to a type of engine called an ion drive that has no moving parts.

You can watch the flight here:

Summary of the science at Nature here [PDF file].

Apparently, the inventor was inspired by the Star Trek shuttles.

Full primary research article here (you can access if you are either at an academic/research institution with a Nature subscription or if you are a subscriber yourself, otherwise it costs) — https://www.nature.com/articles/s41586-018-0707-9.pdf

(16) TIME’S UP. This item is more fun if you watch the video before reading Slate’s intro:

A project description said that Baas was inspired by “the many faceless men who sweep, clean and work at an airport in their blue overalls.” (Are there no female janitors at the Amsterdam airport?) Baas described the “Schiphol Clock” as “basically a big box hanging from the ceiling in Lounge 2,” adding that he decided to use “the most archetypical form of a clock.”

But he added a ladder and a door to create an imaginary path that his video janitor might have used to access the clock, just to heighten the surrealism. “He has a red bucket and a yellow cleaning cloth and he is cleaning up after the hands of time, after which he creates a new minute, every time again,” Baas said…