(1) POUNDING AWAY AT IT. Although I’ll never carry this much British cash, I’m interested in the story: “New £50 note scientist nominations released”.

To be on the list, the individual must be real, deceased and have contributed to the field of science in the UK.

Here’s the Bank of England’s eligibility list [PDF file]. Fred Hoyle is on it. (Don’t you think he looks darling in the mockup below?) Keep looking, probably lots more sf writer/scientists. And I see other unexpected names – like Jethro Tull….

The BBC story notes that there are a lot of women and minorities on the list, but not whether the bank intends to pick someone ignored rather than someone obviously famous. Hawking is the favorite of bookmakers, but women are #2, #3 (tied) and #6 on that list. 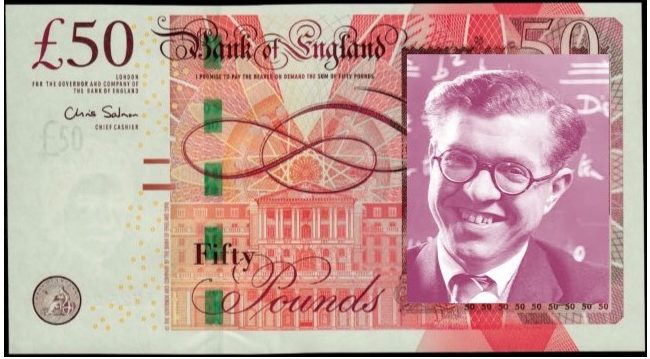 Looking at Nebula and Worldcon program surveys and tbh what I really want is a @scalzi @ChuckWendig @SamSykesSwears panel called "best writing snacks" where they sit there w a bunch of ingredients, assembling and eating their infamous creations while telling funny writing stories

Genre Snackdown: Every writer knows that you need appropriate fuel in order to be productive, but what is the perfect brain food. Join [number] award-winning authors as they assemble their snack food of choice and explain why it is the Perfect Writing Food.

(3) INSIGHT REACHES THE SURFACE OF MARS. CNN follows the headline with a full retrospective of the mission: “NASA’s InSight lander has touched down on Mars”.

After seven months of traveling through space, the NASA InSight mission has landed on Mars. A few minutes after landing, InSight sent the official “beep” to NASA to signal that it was alive and well, including a photo of the Martian surface where it landed.

Mission Control at NASA’s Jet Propulsion Laboratory exploded into celebratory applause and cheers after the touchdown was confirmed. The landing was watched around the world and even broadcast live on the Nasdaq Stock Market tower in New York City’s Times Square.

(4) OUTASIGHT. Satirical Canadian news site The Beaverton suggests that the lander must be glad to be away from humans: “Mars probe glad to leave doomed Earth behind”.

“After the atmospheric entry procedure, InSight reported that it was ‘functioning normally, unlike your ill-fated Earth-bound governments,’” said NASA’s Jet Propulsion Laboratory in a press release… 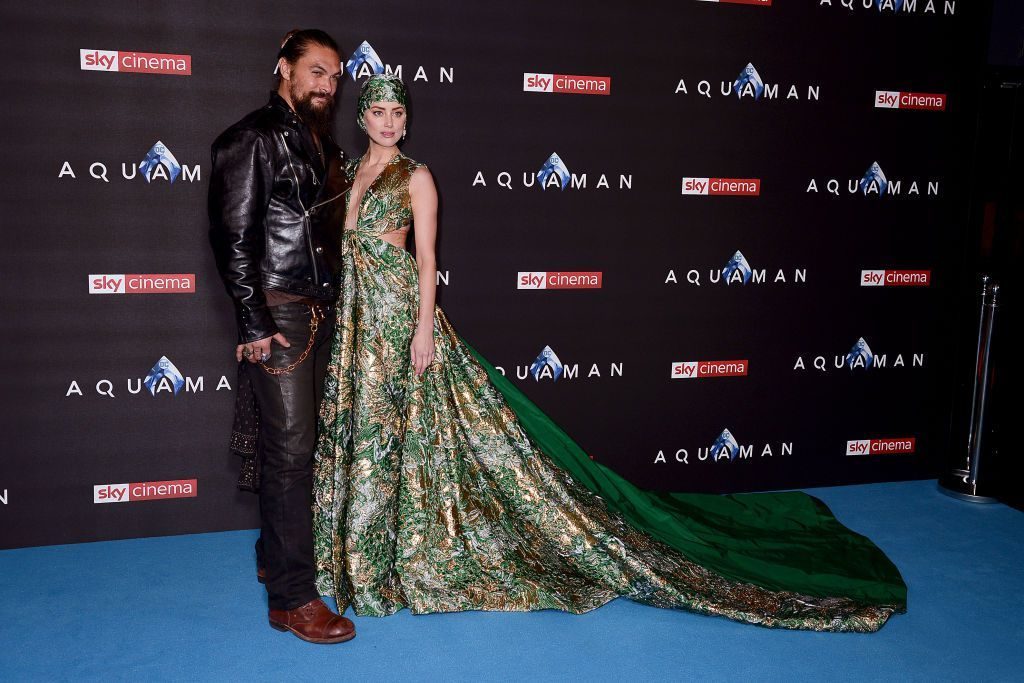 Amber Heard is going very literal with an Esther Williams realness water ballet lewk, complete with an embroidered cap. Loves it. She is giving me 1970s country club loungewear vibes. She just got a perm and she’s just trying to get some sun and maybe stick her feet in the pool. That all tracks.

But what is is Jason Momoa doing in this scenario? This look says less Son of Atlanna and more Son of Anarchy. Whereas Amber is giving us Busby Berkley balletics, Jason is serving Rizzo from Grease.

After 18 stories and 14 episodes over about a year and a half, the “popcast” I hosted has run the gamut for now. GeekWire generally is rethinking its podcast strategy, so the timing is right. The episodes were great fun, and not only were the podcasts distributed through Google Play and Apple Podcasts, but they also aired in Seattle on KIRO-FM on the weekends.

Among the science fiction episodes were interviews with Greg Bear, Cat Rambo and Ramez Naam, a look at the history of Clarion West, how Seattle’s Museum of Pop Culture looks for and preserves science fiction and fantasy artifacts, and how the SF and science fact site Scout uses science fiction as a business planning tool.

All episodes were recorded in real time and not heavily produced, on purpose, to make the guests and topics the star, not the production. However, the audio quality was always excellent.

I will continue to cover science fiction for GeekWire, but just not necessarily in audio form. (Unless Brian Herbert finally gives me that interview I’ve been pestering him about for 18 months, if he ever makes it into Seattle proper.)

All the episodes and stories can be found at this link: https://www.geekwire.com/tag/popcast

(7) JAY OBIT. Magician and actor Ricky Jay died November 24 reports Variety. BravoLimaPoppa3 notes: “For genre related works, he was in The Prestige, Mystery Men and an episode of the X-Files. Plus he could pull off stunts that made magic look real – as close to a real life wizard as you could get. He will be missed.”

Sociopaths have haunted fiction since fiction began, and no wonder. Sociopathy is civilization’s greatest challenge. Richard III and Iago; Raskolnikov, Kurtz, Willie Stark, and Humbert Humbert; J.R. Ewing, Frank Underwood, and even HAL 9000. How do we understand the narcissist, the demagogue, the liar, the manipulator, the person without scruples or conscience? The creative imagination can probe dark places that psychology and medicine can’t reach. So I am not being cute when I say that Star Trek is a source of insight into the universe of President Donald Trump.

….In “Mirror, Mirror,” the normal Kirk, realizing he has entered a barbaric parallel world, is able to impersonate a barbarian long enough to save himself and his shipmates. In our own universe, meanwhile, Kirk’s corrupt counterpart cannot fake values like empathy, trust, and fair play, and quickly finds himself locked in the brig. The sociopath may be charismatic, wily, and manipulative, but he lacks the moral depth and imagination to fool people who do not wish to be fooled….

This did not go over well with Reason readers, however, you need to register to read the comments. If you’re not willing, just think of a lot of comments that sound like Tank Marmot wrote them…

(11) FACE THE MUSIC. [Item by Mike Kennedy.] Apropos item (6) (“Negative Feedback”) from the Pixel Scroll of this past Saturday (11/24), Gizmodo brings us news that “Facial Recognition Flags Woman on Bus Ad for ‘Jaywalking’ in China”. A businesswoman whose visage appeared in ads on busses was publicly shamed for jaywalking, before the authorities had to pull an Emily Litella.

China’s surveillance system is becoming increasingly omnipresent, with an estimated 200 million cameras and counting. While this state of existence alone is unsettling, it’s even more troubling that the machines are fucking up even the simplest task.

Last week, the face of Dong Mingzhu—the chairwoman of a leading air conditioner manufacturer in China—was displayed on a giant Billboard-sized screen in Ningbo, a major port city in east China’s Zhejiang province, to publicly shame her for breaking a traffic law. Zhejiang is one of the provinces that last year deployed facial recognition technology that humiliates citizens who jaywalk by putting their photos on massive LED screens. But the cameras didn’t catch Mingzhu jaywalking—they identified a photo of her in a bus ad, South China Morning Post reported.

(12) CYBER MONDAY. Via KinjaDeals, “ThinkGeek’s Cyber Monday Sale Is a Bonkers 50% Off Sitewide”.

for Cyber Monday, ThinkGeek is taking 50% off sitewide via coupon code DOTCOM. Combined with the lowered free shipping threshold (today you have to spend only $35 pre-discount, rather than the usual $75)

Daniel Dern suggests: “If nothing else, grab a ’Bag of Holding – Con-Survival Edition’ — here’s an image — It quickly became my favorite day bag, not just for cons but also trade shows and general carrying of stuff during a day.”

…However, I do love everything about the magic system, and Cato’s exploration of geomancy and its potential uses for good and ill is thoughtful and feels sturdy, like it could actually exist. Madam Pele is literally awesome. The sylphs are fun without becoming twee….

The point of the Centennal Cycle books, as I see it, is not to offer a plausible alternative to our current democratic system, but to encourage us to ask questions about how that system is organized, and whether we could make different choices that could lead to better outcomes. The idea of a non-contiguous political entity, for example, one that is united by shared policy preferences rather than ethnic or national identity, is an intriguing one. So is the notion of expanding the concept of political parties past national lines (though on a darker note, it also has its echoes in discussions we’ve had on this site about the trans-national nature of many far-right, supremacist movements). It’s not so much that you’d want to pursue any of these ideas in the real world, as that they provide an interesting thought experiment with which to expand your understanding of what government is and can be.

(15) REFINER’S FIRE. This is a hell of a story from the LA Times coverage of the Northern California fires: “As deadly flames approached, a mother called her daughters to say goodbye”. (Definitely skip the comments on this one.)

This is how I die.

She is standing in the driveway of a sand-colored house — she doesn’t know whose — and the air is choked with smoke.

The sky is a nuclear orange. Wind is hurling embers against her body and into her blond wavy hair.

She has just seen an ambulance melt. Transformers are blowing up around her. Homes are caving in and trees are bowing. Fleeing cars have jammed the roads, and flames dance on both sides of the asphalt….

45 thoughts on “Pixel Scroll 11/26/18 Caution: Pixels In Scroll Are Closer Than They Appear”