(1) WHAT’S INSIGHT. The InSight lander, after yesterday’s successful touchdown, charged up its solar-powered batteries and tested its camera…. 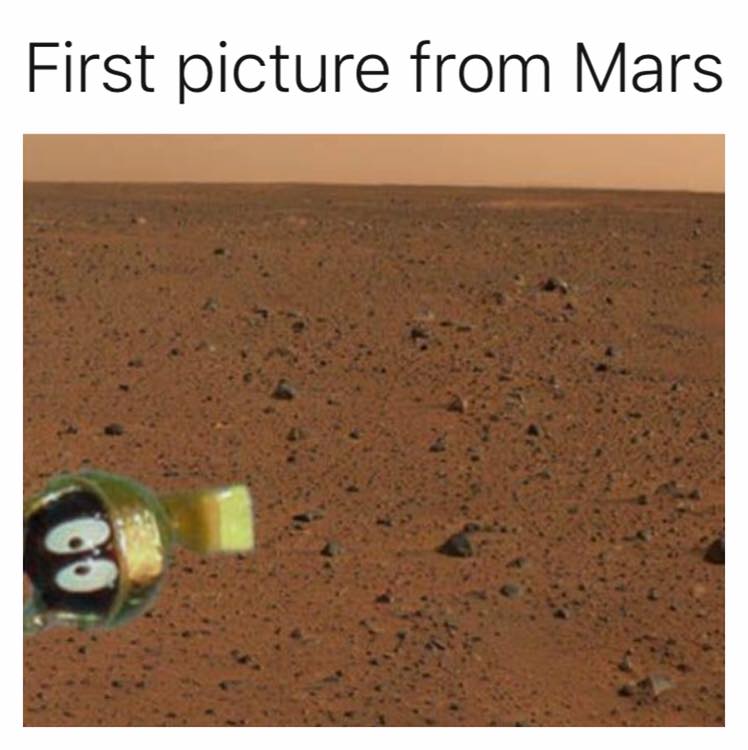 (This may be an old chestnut by now, but it’s a Martian chestnut!)

(2) ELVES AND MEN. Olga Polomoshnova considers partings beyond the end of the world in “Last Goodbye” at Middle-Earth Reflections.

Before proceeding, let us look at the fates of Elves and Men after death to understand why Lúthien’s and Arwen’s decisions caused such grief to their parents. The First Children of Ilúvatar were doomed to dwell in Arda as long as it endured. If Elves died (they could be either slain, or die of grief), they went to the Halls of Mandos and stayed there for some time. Then they, with a few notable exceptions, were restored to their bodily forms and returned to life in Aman. Therefore Elves could reunite with their kin and loved ones: even death could not part them forever.

Use the filters below to explore more than 300 titles NPR staff and critics loved this year. (You can also combine filters!)

The project, code-named Dragonfly, would block certain websites and search terms determined by the Chinese government — a move that, according to a growing number of workers at Google, is tantamount to enabling “state surveillance.”

“We are among thousands of employees who have raised our voices for months. International human rights organizations and investigative reporters have also sounded the alarm, emphasizing serious human rights concerns and repeatedly calling on Google to cancel the project,” said the letter’s signatories, whose group initially numbered nine employees but has ballooned since its publication on Medium.

…The employees are not alone in expressing their dismay at reports of the new project’s development. In fact, they released their letter the same day that Amnesty International launched a protest of its own. The human rights organization announced it would be reaching out to Google staff to add their names to a petition calling on CEO Sundar Pichai to kill the project before it can even get off the ground.

“This is a watershed moment for Google,” Joe Westby, Amnesty’s researcher on technology and human rights, said in a statement Tuesday. “As the world’s number one search engine, it should be fighting for an internet where information is freely accessible to everyone, not backing the Chinese government’s dystopian alternative.”

(5) NYT NOTABLE. Naomi Novik’s Spinning Silver has been named a “2018 Notable Book” by the New York Times. (There is only one page for all the fiction selections, so this link does not go directly to the Novik entry.)

In her stunning new novel, rich in both ideas and people, Novik gives classic fairy tales — particularly “Rumpelstiltskin” — a fresh, wholly original twist, with the vastness of Tolkien and the empathy and joy in daily life of Le Guin.

(6) FOR GIVING. Nerds of a Feather has a nice roundup of recommendations in “Holiday Gift Guide: Games”. Here’s one —

If you are looking for a blast of nostalgia then Fireball Island from Restoration Board Games is the game you want under your tree. Vul-Kar has returned and is not happy. Players make their way around the island picking up treasures and snapping pictures.  You can try to steal the heart of Vul-Kar, but watch out for the rolling embers and fireballs that will make your adventure a dangerous one.  Featuring a bigger board than the original and some optional expansions, Fireball Island looks amazing on the table with its stunning 3-D board and shiny marbles.

Dungeons and Dragons Art and Arcana: A Visual History (recommended by Paul)

This the definitive work that shows the growth and evolution of the artwork used in the Dungeons and Dragons games over the last 40 years. It’s an amazingly deep dive into a look at the game, not just as its art, as filtered through the changing depictions of everything. From the first handdrawn maps of the original developers of the game, to the modern sleek art of today, the book’s art unlocks the evolution of the game through imagery and essays. While the book is mainly arranged by chronology, starting from the precursors of D&D in the 1970’s and running up to today, my favorite feature is “Evilution”, where the book breaks this format to show how an iconic monster or character, like, for example, the fearsome Beholder, has evolved across multiple editions. Features like this give a cohesive and complete view of how the art and the imagery of the game has evolved and changed over time. And, joyfully, the book has some of my favorite art in the game’s history, like “Emirikol the Chaotic”. Anyone vaguely interested in Dungeons and Dragons will love this book. It’s compulsively dippable back into anytime, to be inspired to write, dream, and of course, roleplay.

(9) SPIDER PROLIFERATION. The Hollywood Reporter says “‘Spider-Man: Into the Spider-Verse’ Sequel and All-Female Spinoff in the Works From Sony”.

With just weeks to go before Sony unveils the buzzy animated movie, Spider-Man: Into the Spider-Verse, Sony Pictures Animation is already putting the pieces together for not just a sequel but a spinoff as well.

Joaquim Dos Santos, known for his work on cartoon series Avatar: The Last Airbender and, more recently, Netflix’s Voltron series, has been tapped to direct the sequel. David Callaham, who penned The Expendables and worked on Wonder Woman 1984 as well as Zombieland 2, is writing.

At the same time Lauren Montgomery, who also worked on Voltron and co-directed animated movies Batman: Year One and Superman/Batman: Apocalypse for DC, is in negotiations to helm an untitled Spider-centric project that will gather the female heroes in the Spider-Man universe of characters in one adventure. Bek Smith, who wrote episodes of CBS show Zoo, will pen the script.

If you see a writer in a movie, most likely she (or he) will be tapping on a laptop. But many young writers are doing it on mobile phones, and sometimes in teams….

(12) A GIANT RETURN ON CAPITAL. Another Netflix sff announcement: “Netflix to adapt Roald Dahl stories including Matilda and The BFG”.

Felicity Dahl, the author’s widow, said it was “an incredibly exciting new chapter for the Roald Dahl Story Company.”

She added: “Roald would, I know, be thrilled.”

Melissa Cobb, a spokesperson for Netflix, said: “We have great creative ambition to reimagine the journeys of so many treasured Dahl characters in fresh, contemporary ways with the highest quality animation and production values.”

(13) SHUTDOWN. Text and video on decommissioning a UK nuclear-fuel reprocessing plant — “Inside Sellafield’s death zone with the nuclear clean-up robots”.

But now the complex process of decontaminating and dismantling begins.

It is a dangerous job that will take decades to complete and require a great deal of engineering ingenuity and state-of-the-art technology – some of which hasn’t even been invented yet.

Five sieverts of radiation is considered a lethal dose for humans. Inside the Head End Shear Cave, where nuclear fuel rods were extracted from their casings and cut into pieces before being dissolved in heated nitric acid, the radiation level is 280 sieverts per hour.

(14) PICKY EATER. The “‘Siberian unicorn’ walked Earth with humans” – if so, then the humans got out of its way!

A giant rhino that may have been the origin of the unicorn myth survived until at least 39,000 years ago – much longer than previously thought.

Known as the Siberian unicorn, the animal had a long horn on its nose, and roamed the grasslands of Eurasia.

New evidence shows the hefty beast may have eventually died out because it was such a picky eater.

…Weighing in at a mighty four tonnes, with an extraordinary single horn on its head, the “Siberian unicorn”, shared the earth with early modern humans up until at least 39,000 years ago.

(16) TRADITION OVER THRONE AT MEDIEVAL TIMES. Dave Doering writes, “I see that our boisterous battle and binging eatery has run into tougher times over historical recreations as this line from the Washington Post has it — ’Medieval Times has a queen for the first time, but the show is still stuck in the Dark Ages’.” Dave seems shaken up by this change. “First, it was the maiden market in Pirates of the Caribbean ride in Disneyland, now we have erased more history…”

The Dairy Queen used to reign supreme over the Arundel Mills shopping mall. But last month, a new ruler ascended the throne: All hail Doña Maria Isabella, who presides over a kingdom of knights and squires, horses and falcons, rotisserie chicken, middle-schoolers wearing paper crowns and Honda Odysseys in the parking lot of the fake castle it shares with a Best Buy next door.

History is being made at the same time it’s being reenacted at Medieval Times. It’s the first time a female ruler has presided over the equestrian jousting dinner theater experience in its nearly 35-year history in America. Gender equality and the #MeToo and Time’s Up movements are still making progress in politics and the C-suite, but at least here, in this version of 11th-century Spain, cultural forces have unseated a long-ruling monarch.

(17) BOOZE CONTINUES, CHOW ON HIATUS. The Franklin Avenue blog drew attention to a big change at the reopened (in 2015) Clifton’s Cafeteria, home to LASFS meetings in the 1930s — “Clifton’s Closes Its Cafeteria; Will Food Ever Return to the Downtown Landmark?”

Opened in 1935 as Clifton’s Brookdale, we visited the forest-themed eatery several times before new owner Andrew Meieran (who previously created downtown’s famed Edison bar) shut it down for what was supposed to be a brief renovation in 2011.

Cut to nearly five years later, and rebuilding Clifton’s became a labor of love for Meieran, who has kept the fun and the kitsch but added so much more to the place. Clifton’s finally re-opened in 2015.

Clifton’s original famous slogan, of course, was “Pay What You Wish, Dine Free Unless Delighted.” Perhaps not enough folks were delighted with the updated cafeteria. I asked Chris Nichols via Twitter what he knew about the shut-down cafeteria portion of Clifton’s, and he wrote back: “I also miss eating at Clifton’s. This just in from the owner: ‘food is definitely coming back— pretty soon if anyone asks.'”

“The Haunted Mansion” opened in New Orleans Square on 8/9/69. The Mansion boasted a population of 999 Happy Haunts. People rode in “Doom Buggies” in this ride. The “Ghost Host” of this attraction was the voice of Paul Frees. The tour of the Mansion begins in the famous “Stretching Room.” As the walls get larger, four portraits appear to grow and change right before your eyes. The four paintings were designed by original Disney “Nine Old Men” member and Disney Legend Inductee, Mr. Marc Davis. The Stretching Room portraits were hand-painted from 1969 to 1972. They would be changed over time. Eventually they went to prints. This is a rare original hand-painted Stretching Room painting on canvas. It is very large, measuring 11′ 2″ x 3′ 10″. A wooden pole is at the top, for mounting purposes. This is the Elderly Widow, sitting on her husband’s tombstone. One of the few original paintings from the Stretching Room that we have seen, that is hand-signed by Marc Davis. One of the single most identifiable pieces of Disneyland Park original artwork we have ever come across! A slight crease where the tracks to stretching device were. Minor scuffing and edge wear from normal use. Overall Good condition.