(1) Here is Hampus Eckerman, “A happy Filer on way to see The Martian.” 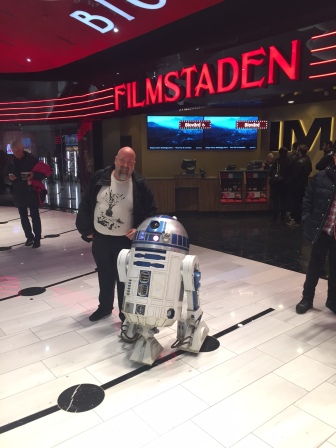 (2) But did he know that The Martian is a comedy? Nobody else knew it either until the people who run a set of Hollywood awards started playing games —

The Martian is one of my favorite films of 2015. It was intellectually stimulating, inspiring, thrilling, and even funny here and there, but was it a comedy? I don’t think so, but that’s the opinion of Hollywood Foreign Press: the organization behind the Golden Globes award. Apparently, the film is being shuffled over into comedy so it’ll have a chance to snatch a few awards–any awards–from the grasps of lighter fare: something that it won’t be able to do in the drama category, where there’s stiffer competition.

(3) In case anybody is really going to Mars, NASA wants to have spacesuits ready:

NASA is not wasting any time in developing new spacesuits to be used in a variety of locations for the Journey To Mars. Two new suits, PXS and Z2, were introduced in October and they have now reached the stage of working advanced prototypes.

The PXS, or prototype exploration spacesuit, was developed to improve performance on extra-vehicular activities (EVAs), spacewalks, in low-earth orbit or outer space. The suit aims to minimize the amount of equipment necessary for long duration EVAs. The PXS has a versatile approach to fittings. Many features are 3D printed, so the suit can be personalized for any crew member and for different types of EVAs.

(4) Remember Westworld, “Where nothing can possibly go wrong…”? If you’re going to the screening of Westworld at the Ace Hotel in LA on November 15, please note that the correct start time is 1:00 PM, not 2:00 PM as displayed in the original show banner. 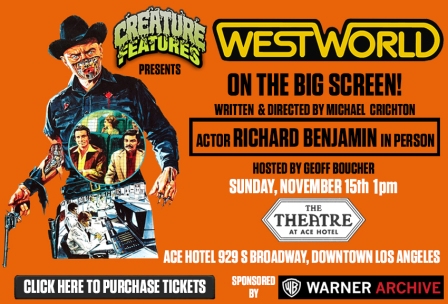 Join Dr. Neil deGrasse Tyson, award winning- astrophysicist, author, and host of FOX’s Cosmos for an evening of engaging conversation on science, exploration and the world as we know it.

(6) Fantasy Faction has an extensive and quite interesting report of the Gollancz Festival for Writers.

On Sunday, 18th of October, prolific SFF publisher Gollancz held the Gollancz Festival for Writers, as a sort of addendum to the already sold-out Gollancz Festival 2015. It had a smaller line-up of authors compared to the main festival itself, and focused solely on writing (obviously). I was gutted that the main festival sold out so it was a pleasant surprise when this was announced, and I snapped up tickets immediately.

The main line-up consisted of Ben Aaronovitch, Joe Abercrombie, Joanne Harris and Joe Hill. Out of these four, I’d only read Abercrombie, and I’ve also seen him at events twice before (including Fantasy-Faction’s own Grim Gathering). Joe is one of my favourite writers and also a joy to see speak, so I was already thrilled to be going, but also seeing three other authors I’ve not seen before was a massive bonus.

Efforts to establish a global ban on offensive autonomous weapons — a.k.a. “killer robots” — have intensified in recent weeks. This uptick in lobbying comes on the heels of an open letter calling for such a ban from a group of artificial intelligence and robotics researchers, including well-known luminaries such as Stephen Hawking, Elon Musk and Noam Chomsky.

Unfortunately, these efforts have stigmatized much-needed research on autonomous robots that will be central to increasing economic productivity and quality of life over the next half century — but only if the technology is able to be developed. Rather than allowing those predicting a techno-dystopia to dominate the debate, policymakers should vocally champion the benefits of autonomous robots — including in the military — and embrace policies designed to accelerate their development and deployment.

“Ban the Killer Robots!” sounds like a demonstration-slogan shout in a scene on Futurama or something from an Ed Wood movie, but this article is about a real organization with real concerns.

From tele-operated drones to rudimentary A.I. in battlefield machines, they’re worried about the further mechanization of war against enemies of a lower technological level which would still be using human soldiers.

Nobody uses the word “cylon” but it sure as hell was the first thing that came to my mind.

And — I am not making this up — according to Twitter, one of the followers of “Campaign to Stop Killer Robots” tweets is Edward James Olmos.

I keep remembering this quotation by Allen Ginsberg, that “We live in science fiction.”  That’s always resonated with me as prophetic, and it becomes more and more true every year.

(8) The BBC would like to get Tom Hanks on Doctor Who.

‘Doctor Who’ has attracted some impressive guest stars over the years including Brian Blessed, Derek Jacobi, Ian McKellen, and more recently Maisie Williams, but it seems like the Beeb has its sights set on an even higher stratosphere of names for the future.

Peter Capaldi, the actor currently in the lead role, says his BBC bosses asked him to tap up Tom Hanks to appear on the hit sci-fi show.

Not that he’d actually have to parallel any role he’s done in movies, but Hanks has experience with some of the show’s familiar tropes – he’s been through a time paradox in Radio Flyer, had his own Pompeii moment in Joe Versus the Volcano, and had an extended lifespan in The Green Mile.

(9) John King Tarpinian has been catching up on Scream Queens: [Spoiler Warning]

I watched the other night’s episode this afternoon, they had a big belly laugh scene. Jamie Leigh Curtis is taking a shower, the opening of which is shot-for-shot the same as her mother did for Hitchcock.  Except that Jamie beats down the bad guy saying, “I’ve seen the movie like fifty times.”

(10) WIRED’s article “We Flew a Lego X-Wing Into the Death Star Because Awesome” has a clever video of exactly what you’d expect from that title.

You can’t make an omelette, they say, without breaking a few eggs. Well, you also can’t blow up a Death Star without crashing a few X-wings. (That was the lesson of Star Wars: Episode IV—A New Hope, right?) But while that sucks if you’re Porkins or one of his pilot brethren, the collision of X-wings and Death Stars makes for some pretty awesome destruction.

Man, this has been a shitty year in many ways, and one full of life lessons that apparently the universe felt were overdue. Some of those I’m still grappling with. I am so freaking behind on this book it’s not even funny, but thank god for both the wonderful time spent writing in California this summer and the kick in the ass that NaNoWriMo has administered. I’m feeling hopeful about that again and making steady progress.

At the same time among the bumps there’s been plenty of bright spots. Among them my first novel, my first appearance in a Year’s Best collection (edited by Joe Hill, no less), and my first acceptance to longtime goal Magazine of Fantasy and Science Fiction (I have been submitting there for over a decade now). I’ve had nineteen original publications come out since my last birthday, and twelve are currently forthcoming, including a team-up with Mike Resnick. Rachel Swirsky and I are working on some projects together, which is terrific fun. I have a good half dozen stories already spoken for. My collaboration with Bud Sparhawk finally got accepted so he can stop nagging me about why it hasn’t sold yet.

As for the Republicans—how can one regard seriously a frightened, greedy, nostalgic huddle of tradesmen and lucky idlers who shut their eyes to history and science, steel their emotions against decent human sympathy, cling to sordid and provincial ideals exalting sheer acquisitiveness and condoning artificial hardship for the non-materially-shrewd, dwell smugly and sentimentally in a distorted dream-cosmos of outmoded phrases and principles and attitudes based on the bygone agricultural-handicraft world, and revel in (consciously or unconsciously) mendacious assumptions (such as the notion that real liberty is synonymous with the single detail of unrestricted economic license or that a rational planning of resource-distribution would contravene some vague and mystical ‘American heritage’…) utterly contrary to fact and without the slightest foundation in human experience? Intellectually, the Republican idea deserves the tolerance and respect one gives to the dead.

(14) You can buy Forrest J Ackerman Presents Music For Robots, created by Frank Coe, on iTunes for $9.99.

The album was released in 2005. It seems that some (all?) of it has already been uploaded to YouTube.

[Thanks to David K.M. Klaus, Hampus Eckerman, Michael J. Walsh, and John King Tarpinian for some of these stories. Title credit goes to File 770 contributing editor of the day Soon Lee.]