(1) TODAY’S THING TO WORRY ABOUT. Luke has a different-colored lightsaber! ScreenRant obsesses: “Star Wars 8: Is Luke’s Green Lightsaber Evidence of His Fall to the Dark Side?”

The fact that several posters and some merchandise have featured Luke holding his old blue-bladed lightsaber – the one Rey brings him at the end of The Force Awakens – instead, adds to the mystery. It’s possible he simply lost the lightsaber during the 35 years since The Force Awakens, but that’s a weird thing to hand wave away. The more likely explanation is that we haven’t seen it because it’s a spoiler.

Journalist Josh Jones created an interactive map for Special Request magazine that traces every leap Sam Beckett took during Quantum Leap’s series run, with every episode title and description available for those who want to match the leap with the location.

Using Google Maps, Jones marks a total 93 leaps across five seasons, with the second season having the most leaps out of all of them (22, one more than every following season). Most of them took place in the United States, though there were a few in Europe, along with one in Egypt and another in Japan. But it looks like Sam never managed to leap to Central America, South America, or Australia. What, were there no koalas who needed help?

The link is: Google Map of all the Quantum Leaps.

Ilene: Lately, it seems like there are a lot of winners who are also cheaters… are we going backwards?

David: Amid 6,000 years of feudal despotisms, a few brief moments of illumination happened when citizens rose up to rule themselves. Periclean Athenian democracy was spectacularly agile and creative, but only lasted about one human lifespan, before it was crushed by neighboring oligarchies. The Florentine Republic was shorter lived. But we’ve managed about 250 years of an amazing experiment.

So don’t be myopic. Other generations of Americans faced crises and attempts by would-be feudal lords to smash our diamond back into the old pattern. Generally, these phases of the American Civil War (we’re in phase eight) have ended surprisingly well, as we extend freedom and rights and dignity to ever more kinds of people. But at the time, each crisis seemed impossible to overcome.

We need confidence. Alas, that is why many voices in power and media try to spread gloom.

(4) NO PRIZE. Andrew Porter was watching Jeopardy! when contestants hilariously failed to recognize clues to a classic sf novel.

Wrong answers: “What is Watership Down” and “What is the Ballad of Cap’n Crunch?”

On TV in the 1960s we learned that its mission was “to seek out new life and new civilizations.”

Contestant: “What is Apollo?”

(5) ANIMAL CROSSING. Is Vox Day doing what he otter? That and other animal-based questions can be answered using Camestros Felapton’s chart in “Today in Pointless Statistics”

Yesterday, I was speculating about how the far-right may have a fear of rabbits. I’ve no means of ascertaining that but I did wonder if rabbits got mentioned more than you would expect.

It has been postulated that the alt-right talks about rabbits a lot. Our research unit examined this hypothesis empirically using highly advanced data-mining techniques.

Using a sample of common animal words, the frequency of use of those words was established and then compared with word frequency in an established corpus of English words. It was established that at least one member of the alt-right talks about rabbits disproportionately….

Camestros was so tickled by the experiment that he repeated the search on two other “control” blogs, discovering that “cat” was the animal most often mentioned on both — however, the word appears on File 770 (in posts and comments) ten times more often than on Monster Hunter Nation. Meow, baby!

(6) HOLD ONTO YOUR WALLETS. The Verge issues a warning — “Amazon wants to turn Lord of the Rings into the next Game of Thrones”. Maybe call it, The Eye in the High Castle?

Amazon Studios has been looking for a way to duplicate HBO’s success with Game of Thrones, and the company may have found a solution: adapting J.R.R. Tolkien’s The Lord of the Rings into a TV series. Variety reports that the company is currently in talks with Warner Bros. Television and the late author’s estate, and while discussions are said to be in “very early stages,” it is clearly a high priority, with Amazon CEO Jeff Bezos himself involved in the negotiations.

Amazon isn’t the only looking into the rights, according to Deadline, which reports that the Tolkien Estate is looking to sell the television rights to the iconic fantasy series to the tune of $200-250 million, and has approached Netflix and HBO as well. There appears to be some strings attached: the rights might not encompass all of the characters in the story. HBO has reportedly passed on the project.

In Tor.com‘s July set of stories I thought “The Mar­tian Obelisk” by Linda Nagata the best. It’s set in a future in which a series of disasters caused by human nature, environmental collapse, and technological missteps have led to a realization that humanity is doomed. One old architect, in a gesture of, perhaps, memorialization of the species, has taken over the remaining machines of an abortive Mars colony to create a huge obelisk that might end up the last surviving great human structure after we are gone. But her project is threatened when a vehicle from one of the other Martian colonies (all of which failed) approaches. Is the vehicle’s AI haywire? Has it been hijacked by someone else on Earth? The real answer is more inspiring – and if perhaps just a bit pat, the conclusion is profoundly moving.

…Chris Hemsworth, Cate Blanchett, Tom Hiddleston, Tessa Thompson, Mark Ruffalo, and Jeff Goldblum, reprising their movie roles for a live, surprised audience who thought they were actually seeing the new Marvel movie. “Will they be mad that I’m interrupting the film?” Corden says. “Possibly. You know, wherever there is change, people will call it disruption. So I guess, you know, what I’m saying is, ‘Who gives a [bleep]?’”

(11) MORE THOR. Every media adaptation of Thor (before James Corden got hold of him) is referenced in this video: (Hat tip to io9.)

(12) HATCHING OUT. Cheryl Morgan, in “Aotearoa Futurism”, tells where you can learn about some of the subtle Maori-oriented references planted by the director in Thor: Ragnarok.

I’m not going to give you spoilers here, but if you have already seen the film I recommend this article by Maori SF fan, Dan Taipua. The director of the film, Taika Waititi, is also Maori, and he has left a whole bunch of Easter eggs in there for his people, and for their indigenous Australian friends.

Dan got in touch with me on Twitter and pointed me at two Radio New Zealand podcasts in which he and colleagues apply the ideas of Afrofuturism in a specifically Maori/Polynesian context. You can find them here and here.

I’m delighted to see this sort of thing happening in the South Pacific, and I’m hoping to learn a lot more about Aotearoa Futurism if/when Worldcon comes to New Zealand in 2020.

(13) HOLLYWOOD REVIVAL. I started following the fate of this legendary Hollywood joint because Ray Bradbury used to lunch there with people like with the likes of Sam Peckinpah and John Huston. Therefore I’m sure he’d have been happy to know — “Formosa Cafe Will Come Back Shinier Than Ever”.

A $150,000 grant has been awarded to 1933 Group, a hospitality company with a number of bars around Los Angeles, to rehabilitate West Hollywood’s iconic Formosa Cafe.

The restaurant, which closed at the end of 2016, was opened in 1925 by a retired boxer who apparently loved trains: The lunch counter was built in a retired Pacific Electric Red Car trolley. It was built next to some of L.A.’s earliest movie studio lots, and immediately attracted a movie star clientele. And some mobsters, too. The Formosa lost some of its luster in its later years but was still beloved by nostalgics (and played itself in the 1997 film L.A. Confidential).

Listening to Adam Griffiths talk about his new graphic novel, Washington White, is a dizzying experience. It’s a science fiction spy thriller that takes place in D.C.—and also a parallel universe within an engineered disease that only the government knows about. In this mysterious world, the president of the United States authorizes the testing of mind-control drugs, a transgender drummer fights to rejoin her punk band, and a greedy developer tries to gentrify the parallel universe-within-a-disease with a sea of condos. At the center of it all is the novel’s titular newspaper, Washington White—a tabloid whose black owner tries to tell the public about all the crazy shit going on in the District because his dad is the one behind it….

… It has become de riguer at my former favorite magazine, that of Fantasy and Science Fiction, to print “funny” literary stories.  Tediously amusing, dully droll, laden with parenthetical (uselessly so) clauses — and hyphenated articulations, sometimes “quoted” for extra sardonicism.  And did I mention the extra verbiage?  These magazines pay three cents per word, you know….

Having poured myself a stiff drink in reward for having made it through the opening novella, my moment of self-congratulation was shattered as I espied the byline of the next piece.  Davidson is the poster child for excellence gone to the prolix weeds.  Sure enough, this piece, ostensibly about earthworms and aliens, is possibly his worst offender yet.  One star.

An adaptation of Munro Leaf’s children’s book The Story of Ferdinand, this newest film from a 20th Century Fox studio follows a bull with a big heart (voiced by John Cena) who gets captured and must fight to find his way home. To help gear up for the film’s approaching release, zero calorie beverage company Zevia is offering young moviegoers the chance to sip one of four flavors in their exclusive tie-in line of non-caffeinated sodas. That includes ginger root beer, grape, cream soda and black cherry—all of which feature a natural sweetener. 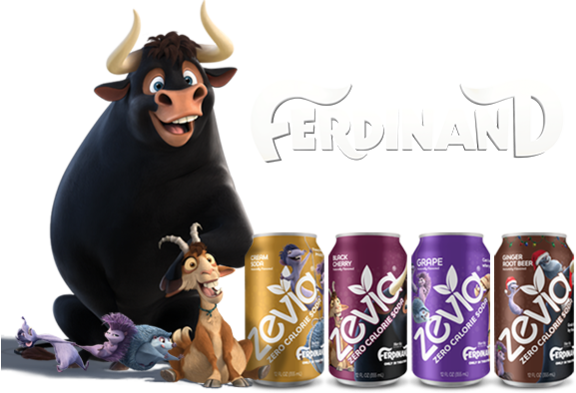 … Only 1,250,000 cans will be released and are available, beginning yesterday, in 20,000 U.S. grocery stores. You can get a six-pack of these special edition Zevia sodas for $5.99 at retailers like Target, Whole Foods, and Sprouts Farmers Market from now until the film’s mid-December release. As a sweet bonus, you’ll get a Fandango coupon for $5 off a Ferdinand movie ticket when you buy the soda.

(17) ZERO OUT OF TEN DENTISTS RECOMMEND. After drinking all that soda, remember to brush your teeth. What’s that you say, Count, it wasn’t soda you were drinking? 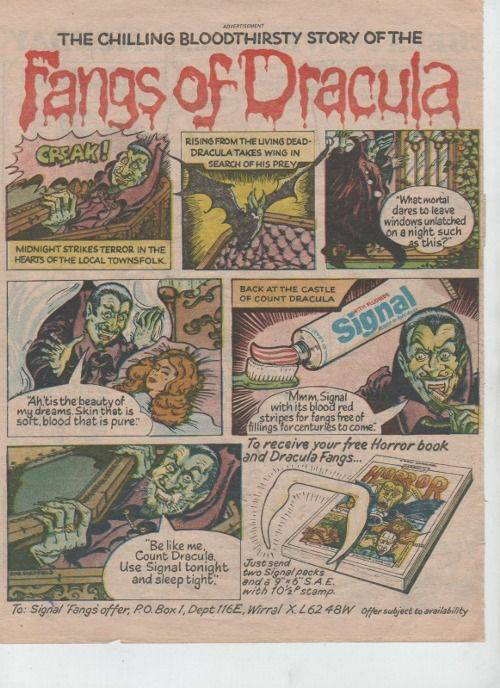 (18) SHIRT OFF HIS BACK. Looking for Christmas gift suggestions?

I am absolutely wearing this to work tomorrow. @ChuckTingle pic.twitter.com/rnYkiRxY1g

39 thoughts on “Pixel Scroll 11/4/17 Do You Come From The Land Scroll’d Under, Where Pixels Glow And Files Sunder?”