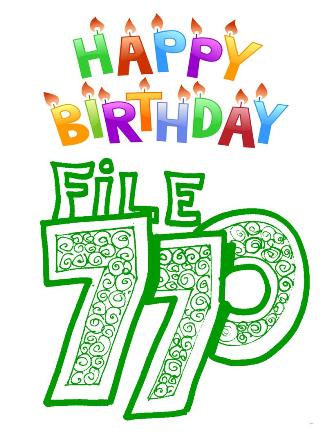 (1) HAPPY NINTH BIRTHDAY FILE 770! January 15, 2008 is when I wrote my first post for File 770. That’s the day it all began, although you can find posts here with earlier dates imported from an old Blogspot site I never did much with, or are copies of posts written for Victor Gonzalez’s Trufen.net.

(2) INSTANT WINNER. Iphinome has scripted a line for the must-have confrontation scene in Star Wars IX:

Hello. My Name is Leia Organa. You killed my husband. Prepare to die.

(3) NAME ABOVE THE TITLE. Cameron gets first billing over sf in this series — “’James Cameron’s Story of Science Fiction’ will debut on the cable network in 2018”.

AMC has ordered a new documentary series from James Cameron that will explore the evolution of sc-fi.

Tentatively titled James Cameron’s Story of Science Fiction, the six-episode series will delve into sci-fi’s origins as a small genre with a cult following to the blockbuster pop-culture phenonmenon it is today. The show is slated to debut in 2018.

In each hourlong episode, the Avatar director will introduce one of the “big questions” that humankind has contemplated throughout the ages, and reach back into sci-fi’s past to better understand how our favorite films, TV shows, books, and video games were born, and where the genre — and our species — might be going in the future. Cameron and his contemporaries, who have helped to fuel sci-fi’s spectacular growth over the last several decades, also debate the merit, meaning and impact of the films and novels that influenced them.

(4) THE SEQUEL. Unless Hugh Jackman consents to a Deadpool/Wolverine team-up, here’s what’s on the drawing board — “’Deadpool 2’ Writers Talk Return of Negasonic Teenage Warhead, Colossus, Dopinder, and Arrival of Cable”

First, scribes Rhett Reese and Paul Wernick chatted with Collider, confirming that when Reynolds’ anti-hero returns, Colossus and Negasonic Teenage Warhead, the two X-Men who joined him on his mission of revenge in last year’s $783 million-grossing hit, will be on screen again as well. The extent of their participation remains unknown (“They’ll make at least an appearance,” says Wernick), but clearly, the makers of the upcoming sequel — including new director David Leitch (John Wick) — are interested in maintaining some continuity between their new effort and its predecessor.

For further proof, Wernick then went on to tell Nerdist that Deadpool will also once again pal around with Karan Soni’s Dopinder, the cab driver who bonded with — and heeded the advice of — the Marvel assassin in the original film. As the writer said, “I would say that the relationship between Dopinder and Deadpool was the most fun for me. I love that relationship and I love that character. And he’ll be in the sequel.”

(8) DIVERGENT AUTHOR. There is a profile of Veronica Roth by M.B. Roberts in the January 15 Parade Magazine, as part of a regular feature on how celebrities spend their Sundays.  We learn that Roth wears pajamas most days unless she is going out to exercise, how her favorite breakfast is Kashi Oat Flakes and Blueberry Clusters,and even her favorite wine (Petilant-naturel).  The profile is tied to the publication of the first book of Roth’s new series, Carve the Mark, and is unusual because it’s the first profile of a novelist in this feature, which usually interviews actors or musicians.

(9) INSIDE BASEBALL. I wrote to the person who sent me yesterday’s item about Jonathan McCalmont refusing award nominations —

I’ll use this, though it will violate the unspoken I’ll-ignore-you-if-you-ignore-me truce I have enjoyed since we moved past the whole platforming fascists thing.

McCalmont making this kind of announcement is news, after all.

McCalmont may or may not have been responding in this tweet.

tfw when soneone opens a portal between your website and American SFF fandom. Brace for a tidal surge of stupid.

There are, after all, hundreds of sf blogs in America. However, our mutual friend Mondyboy is sure he could only be talking about mine —

— because peace would be too long….

(10) READING ASSISTANCE. Greg Hullender says Rocket Stack Rank’s information for the three short fiction Hugo categories is up, as is the info for the Campbell Award.

The professional artist page will be available on January 16.

The best editor (short form) page will be available on January 23.

Hullender adds, “We decided not to try to do Best Fan Artist this year because the field is just too vast to have any hope of doing it right.”

If you’re still looking for things to read

You can find information on this page for:

The stories in each of these lists are grouped by a “recommendation score” from six prolific short-fiction reviewers, and each entry includes links to reviews.

(11) TINGLE TIME. This weekend at Arisia Pablo Vazquez and Mark Oshiro were part of a panel about Chuck Tingle. Vazquez invited the good doctor to send a statement for them to read.

i have sent important STATE OF THE BUCK ADDRESS i hope there are a lot of buds trotting togeather at this panel it will be a good way https://t.co/TzWIAXZYt7

The following is Dr. Chuck Tingle’s (World’s Greatest Author) State of the Buck Address, delivered by yours truly on his behalf at Arisia 2017. Enjoy the wisdom and thanks to the eternal Dr. Chuck Tingle, constantly helping us find ourselves as bucks. It is unedited, presented in its original true buckaroo purity.

here is important statement: hello this is DR CHUCK TINGLE writing to you from billings thanks to online bud name of pablo and online bud name of mark! tonight is a good way son jon and clowy are watching a BIG TIME MOVE in the living room name of MATTS DAMON TAKES LAS VEGAS it is very loud and handsome matt just punched a scoundrel. i have had three chocolate milks jon thinks i have had 1. so that is my night how is yours buckaroos? …

(12) FIRST TRUMP. I’m guessing this isn’t going to be a hagiography: “Roger Corman Revs Up ‘Death Race 2050’; ‘We Have the First Picture to Portray Donald Trump as the President of the United States”.

Prior to Death Race 2050, the Death Race franchise was revived as a 2008 feature by Paul W.S. Anderson followed by a series of direct-to-DVD spin-offs. What were your contributions to those versions?

My work as a producer on those was almost zero. They gave me the script to the first one, and the others, and asked for my notes on the first one, but other than that I had no actual function. But I know Paul Anderson and I know what he was doing [with Death Race]. He was going for a straight action picture, which was what the first draft of Death Race 2000 was as well. When I read it, I thought there was something missing, and that’s when I came up with the idea of the drivers’ killing of the pedestrians, as a way to integrate the public with the violent sport that they love. But you couldn’t take that too seriously, so that’s when I introduced the element of comedy. When I called Universal about [their plans for] Death Race, I told them that [satire] was really essential to the original idea. So they asked me if I would like to make one. I went back to the original idea and here we are.

(13) EARLY ARRIVAL. Fandango shows some alternatives to the aliens who made the screen — “’Arrival’ Concept Art Reveals Much Creepier Aliens”.

The final movie features contact with an alien species (partially pictured above) that is awe inspiring and yet comforting, albeit in a strange, unsettling kind of way. They’re enormous, but they’re gentle. They’re clearly capable of great things, but they constantly act with restraint. Their very presence is a perfect balance between shock and curiosity. Had the aliens looked a little different, however, that balance may have been thrown off quite a bit. And now thanks to some early, unused concept art from Peter Konig, we can imagine what could have been, and appreciate what ended up happening all the more.

Perhaps the most impactful difference between Konig’s proposed designs and the final version is the presence of eyes. Director Denis Villenueve wisely opted to go for a design that didn’t have eyes as a focal point, which helps defuse a lot of potential baggage by blocking up those pesky windows to the soul.

(14) STILL SPEAKING OF ARRIVAL. In “Emergency Dialect” in Real Life Magazine, Paco Salas Perez explains why Arrival is based on a surprisingly deep understanding of linguistics.

Linguists and computer scientists use a rubric known as the Chomsky hierarchy, first put forward by Noam Chomsky in 1956, which seeks to describe the major classes of formal grammars — the rules that define the possible sentences of a language. There are four types, ranked by computational power, with Type 3 being the simplest and smallest family of grammars, and Type 0 the most powerful. Any programmer is aware that some higher-level languages are more powerful than lower-level ones, but that lower-level languages are often easier to use for certain dedicated tasks that require verbose solutions in more powerful languages. The same is true for communication systems produced by evolution. Gestural systems like those found among primates are simple and highly effective: they’re based on individual signals, each associated with broad meanings like “food” or “danger,” but with no regular relations between signs, which are instead produced in an unordered and unstructured, “stream of consciousness” manner, even by primates who have been taught to sign by humans. Human language, and only human language, exhibits properties from Types 1, 2, and 3.

Heptapod B doesn’t play by the rules we’re used to….

(15) THE B TEAM. Carl Slaughter confesses, “Spoof, parody, satire, I can never remember the difference.  Anyway, if you want to watch a spoof-parody-satire series of ‘Agents of S.H.I.E.L.D.’, try Interns of Field’ from Screen Junkies.  If Shield is the B team to Avengers, Field is the B team to S.H.I.E.L.D. – ‘Interns, assemble!’” This video was first posted a year ago —

[Thanks to Carl Slaughter, Martin Morse Wooster, Harold Osler, Gregory N. Hullender, and John King Tarpinian for some of these stories. Title credit goes to File 770 contributing editor of the day IanP.]