I am now allowed to say that I am writing both the novelisation for the forthcoming movie Alita: Battle Angel as well as the prequel novel, Iron City.

And this is why I’m in Deadline Hell.

In post-war Germany, a version of Casablanca was produced, re-edited and with a new script for the dubbing, that had no Nazis in it. As you can imagine, given the role Nazis play in the plot, they had to do a lot of work.

Star Not Wars Because They Aren’t Having a War With Anybody: A New Hope

A spaceship has broken down. Princess Leia finds a robot on the ship and gives it something. The robot (R2D2) finds an escape pod with its friend (C3PO). They leave the ship. We don’t see the ship again. It probably had engine trouble or something. Maybe the robots have gone off to get some fuel from a service station.

The robots land in a desert. After an argument, they split up. Later they each get caught by tiny people.

Meanwhile, young Luke Skywalker is unhappy being a farmer and living with his uncle. He’d rather be…doing something else I suppose.

(3) MARK YOUR CALENDAR. The Vintage Paperback Show returns to Glendale, CA on March 18. 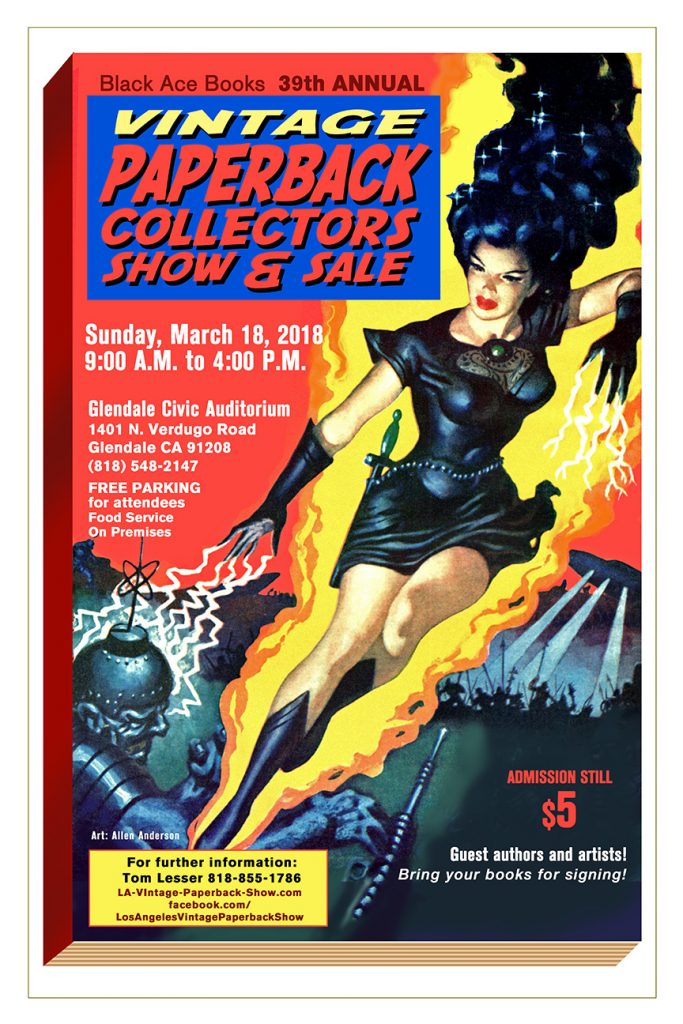 Is it worse if a robot instead of a human is used to deter the homeless from setting up camp outside places of business?

One such bot cop recently took over the outside of the San Francisco SPCA, an animal advocacy and pet adoption clinic in the city’s Mission district, to deter homeless people from hanging out there — causing some people to get very upset.

I’m sorry for being so frank, but this absolutely disgusts me as someone that experienced homelessness.

Every time I travel to San Fran my heart breaks from seeing all the homelessness in a city with so much wealth and privilege.

The SPCA deployed a robot from security startup Knightscope to deter crime and vandalism on their campus.

And, according to both the S.F. SPCA and Knightscope, crime dropped after deploying the bot.

However, the K9 unit was patrolling several areas around the shop, including the sidewalk where humans walk, drawing the ire of pedestrians and advocacy group Walk SF, which previously introduced a bill to ban food delivery robots throughout the city.

“We’re seeing more types of robots on sidewalks and want to see the city getting ahead of this,” said Cathy DeLuca, Walk SF policy and program director, who also mentioned S.F. district 7 supervisor Norman Yee would be introducing legislation around sidewalk use permits for robots in the beginning of 2018.

Last week the city ordered the S.F. SPCA to stop using these security robots altogether or face a fine of $1,000 per day for operating in a public right of way without a permit.

The S.F. SPCA says it has since removed the robot and is working through a permitting process. It has already seen “two acts of vandalism” since the robot’s removal.

(5) THE DIAGNOSIS. Ted Chiang says “The Real Danger To Civilization Isn’t AI. It’s Runaway Capitalism” in an article for Buzzfeed.

…Speaking to Maureen Dowd for a Vanity Fair article published in April, Musk gave an example of an artificial intelligence that’s given the task of picking strawberries. It seems harmless enough, but as the AI redesigns itself to be more effective, it might decide that the best way to maximize its output would be to destroy civilization and convert the entire surface of the Earth into strawberry fields. Thus, in its pursuit of a seemingly innocuous goal, an AI could bring about the extinction of humanity purely as an unintended side effect.

This scenario sounds absurd to most people, yet there are a surprising number of technologists who think it illustrates a real danger. Why? Perhaps it’s because they’re already accustomed to entities that operate this way: Silicon Valley tech companies.

(6) CHEERS AND BOOS. Fanac.org has posted a 36-minute video of Robert A. Heinlein’s guest of honor speech at the 1976 Worldcon.

MidAmeriCon, the 34th World Science Fiction Convention, was held in Kansas City in 1976, with Robert A. Heinlein as Guest of Honor. With a warm introduction by Bob Tucker, this sometimes uncomfortable speech touches on Heinlein’s belief in the inevitability of atomic war and his belief that mankind will go to the stars. There are comments on Russia and China, the role of men, and more than a few very bad jokes. You will hear applause and you can hear disapproving boos. If you are one of “Heinlein’s Children”, or simply a reader of classic SF, this video is a rare opportunity to hear that legendary figure.

(More background about the booing is here.)

Do you want to join them? One of the stretch goals was adding two extra unsolicited stories to the issue! We will be open to submissions from March 1- March 15, 2018.

(9) TROLLING FOR CLICKS. At NBC News, Noah Berlatsky asks “Is Star Wars’ ‘The Last Jedi’ science fiction? It’s time to settle this age-old argument”. Will anybody take my bet that the argument will not be settled by his op-ed? Or maybe it will, by a kind of cinematic force majeure.

To figure out whether Star Wars is science fiction, you first need to figure out how to define the term — which is harder than you might think. Genres are notoriously difficult to pin down, which is why they spark so many arguments. Some country fans protested loudly when Beyoncé appeared at the Country Music Awards because she (supposedly) was not a country artist. Some critics similarly argued that Bob Dylan’s lyrics are not literature, though the Nobel committee disagreed.

Genre is a marker of quality and belonging, of seriousness and community. Science fiction in particular is often seen as more important or serious than fantasy, so it’s no wonder that there’s been some struggle over how to place the films. George Lucas himself declared that “Star Wars isn’t a science-fiction film, it’s a fantasy film and a space opera” in 2015. Others have also waded in over the years; Annalee Newitz included Star Wars in a list of 10 science-fiction works that are really fantasy at io9, while author Brian Clegg says Star Wars is only “low-grade science-fiction” — it’s not quite real science-fiction, so it’s not high quality.

(13) I HAVE A LITTLE LIST. SyFy Wire’s Swapna Krishna names these as “The 10 best sci-fi and fantasy books of 2017”. People get upset if I say I haven’t heard of all the books on a “best” list, so let me say I have heard of many of these.

(14) THE GHOST OF CHRISTMAS 2014. Everyone has their own way of celebrating the holidays. John King Tarpinian’s traditions include rewatching Thug Notes’ analysis of Dickens’ “A Christmas Carol.”

The total for The Last Jedi includes $220m (£165m) from box offices in the US and Canada, placing the film second in the all-time list for North America.

(16) BREATHLESS TAKE. Chuck Wendig launches his review with a long stretch of onomatopoeia: “The Last Jedi: A Mirror, Slowly Cracking”. And how often do you get a chance to use that word?

This will be less a review of The Last Jedi (Episode VIII) than it will be… my thoughts? An analysis? Me opening my head like a flip-top Pac-Men and seeing what globs of brain-goo I can grab and hastily smack into the screen?

(17) WHAT’S BREWING IN SHORT FICTION. Nerds of a Feather’s Charles Payseur serves “THE MONTHLY ROUND – A Taster’s Guide to Speculative Short Fiction, 11/2017”.

So please, take seat. The flavors on tap this month are perfect for those looking to unwind by the fire, to shed a tear for those who have not made it this far, and to reaffirm a commitment to pushing forward, into a future that is not mired by the same harms and dangers as the past. Each pint today comes with a special side of memories and a tendril of shadow creeping just out of view. The only remedy is to drink deep, and share the moment with those you care about, and look for ways to escape the familiar cycles of hate, loss, and fear—together….

Notes: Pouring a dark brown rimmed with gold, the first sip is deep, subtle and smoky like dreams burning, only to reveal newer, sweeter tones underneath, a future still bright despite loss and danger.

Review: Kalyani is a young (probably autistic) girl who experiences the world quite differently from the rest of her family. It’s something that Aruni, her older brother, finds quite difficult to handle, especially when his parents have left him in charge while they are away. For Kalyani, though, it’s the rest of the world that doesn’t make as much sense, that overflows with threats and dangers…

In 1959, a groundbreaking TV series began in the USA. The Twilight Zone came to be regarded as a classic of science fiction for the small screen. Now the Almeida Theatre in London is taking eight episodes to make a Twilight Zone for the stage.

(19) YA. A dystopia? Why, that’s just another day in a teenaged life: “Why Teens Find The End Of The World So Appealing”.

“The hallmark of moving from childhood to adulthood is that you start to recognize that things aren’t black and white,” says Ostenson “and there’s a whole bunch of ethical grey area out there.”

“Their brains are very responsive to emotionally arousing stimuli,” he explains. During this time, there are so many new emotions and they are much stronger than those kids experienced when they were younger.

“When teenagers feel sad, what they often do it put themselves in situations where they feel even sadder,” Steinberg says. They listen to sad music — think emo! — they watch melodramatic TV shows. So dystopian novels fit right in, they have all that sadness plus big, emotional ideas: justice, fairness, loyalty and mortality.

This time in a kid’s life is often defined by acting out, but, Steinberg says, that’s a misguided interpretation of what’s happening. “It isn’t so much rebellion, but it is questioning.”

Europe’s new Sentinel-5P satellite has captured a dramatic image of the smoke billowing away from the devastating California wildfires.

It is a powerful demonstration of 5P’s ability to sense the atmosphere.

The plume is seen to sweep westwards out over the Pacific Ocean near Los Angeles and then turn north towards the State of Oregon.

(21) JDA. Jon Del Arroz shares his vision of the controversies he’s engaged in this year with BayCon, Scalzi, Cat Rambo, Chuck Wendig, and some guy who scrolls pixels in “It’s Better To Be My Friend #JDAYourFriend”.

…Where they all screwed up, is that I’m a competent writer who works hard. I’m a competent businessman who markets hard. I don’t take my ball and go home and I’m not deterred from speaking the truth by some threats or someone’s bully pulpit.

And now I’ve got a platform. It’s one a lot of people read on a daily basis. It’s only going to grow bigger in 2018. I’m a well-respected journalist, I’m a multiple-award nominated author with an avid readership. I’m winning. Readers and audiences like winners. Yet not one of these people has come forward and said “you know what, Jon, I shouldn’t have attacked you, let’s be friends.”

(22) TO SMELL THE TRUTH. Hugo-winning editor Gordon Van Gelder had a famous father, Dr. Richard Van Gelder, who tried to stump the panelists on the episode of game show To Tell The Truth aired March 13, 1961. The chairman of the Department of Mammals at the American Museum of Natural History, Van Gelder pere was specially touted as an expert on skunks. The real Van Gelder and two impostors appear at 17:00, and the truth is told right after the 23:00 mark.