I could retweet threads about reviewing all day, people. Here's a good one. https://t.co/ai2tr5HG3v

Some of the points he makes include —

(3) DUFF. Yesterday’s announcement that they’re looking for Down Under Fan Fund candidates included a statement that the delegate will go to the Worldcon “or another major convention in North America in 2018.” I asked Paul Weimer, is that a change? Paul replied —

The intention for this is two fold–one to provide, in future years for situations in years where Worldcon is not in North America (if the 2020 NZ bid wins, for example, this will be an issue), and also to provide for the possibility that the winning delegate wants to focus on, say, Cancon, or another major SF con in the United States.

We expect that its almost certain that any winning delegate will want to go to Worldcon, but this provides flexibility in that regard.

Major articles by John Litchen (the second part of ‘Fascinating Mars’) and Colin Steele (his usual book round up ‘The Field’), as well as articles by Tim Train and Yvonne Rousseau.

The granddaddy of surreal, science fiction television anthologies is returning. CBS announced today that it has issued a series order for a revival of The Twilight Zone from Jordan Peele’s Monkeypaw Productions and Simon Kinberg’s Genre Films for its All Access streaming service.

Peele and Kinberg, along with Marco Ramirez (Marvel’s The Defenders), will serve as executive producers on the show and will “collaborate on the premiere episode.” CBS has yet to announce a release date, casting, or any other writers attached to the project. Like Star Trek: Discovery, however, the show is destined as exclusive content for the network’s paid streaming service, CBS All Access.

(6) ON BOARD. How appropriate that The Traveler at Galactic Journey has found a way to kill time! “[December 6, 1962] How to Kill Friends and Influence People (The game, Diplomacy)”.

Ah, but here’s the tricky bit.  Turns are divided into two segments.  The latter is the one just described, where players write their marching orders.  The former is a 15-minute diplomacy segment.  This is the period in which players discuss their plans, try to hatch alliances, attempt to deceive about intentions.  It is virtually impossible to win the game without help on the way up; it is completely impossible to win without eventually turning on your allies.  Backstabbery is common, even necessary.  Honesty is a vice.

Diplomacy is, thus, not a nice game.  In fact, I suspect this game will strike rifts between even the best chums.  So why play at all?  Why suffer 4-12 hours of agony, especially when you might well be eliminated within the first few turns, left to watch the rest of your companions pick over your bones?

(7) TREACHERY IN THE PRESENT. Meanwhile, here in 2017, holiday gift shoppers might want to pick up the “CLUE®: Game of Thrones™ Exclusive Expansion”. 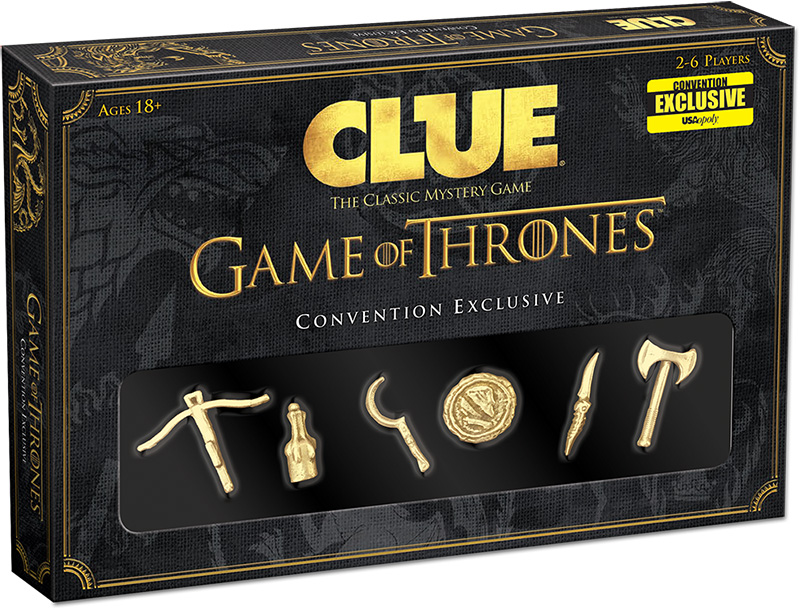 Add more treachery and betrayal and create an all-new game play experience while solving the mysteries in Game of Thrones Clue with this  special exclusive expansion that includes two additional character suspects and power cards as well as beautifully gold-finished weapons.

Really, though, for a genuine Game of Thrones experience it would have to be possible for all the suspects to be murdered in the same game.

(10) COMICS SECTION. Brian Kesinger, a veteran visual artist for Disney and Marvel, has created Watterson-style mashups that merge The Force Awakens characters with Calvin and Hobbes. “Disney Illustrator Combines Star Wars And Calvin & Hobbes, And The Result Is Adorable” at Bored Panda.

(11) HAIR TODAY. Interesting how movie marketing works now. A trailer for the new Jurassic World sequel will be out Thursday, heralded by a 16-second teaser, and this behind-the-scenes featurette. SciFiNow.uk claims, “Jurassic World: Fallen Kingdom featurette has loads of new footage and freaking out”.

Ahead of the trailer release tomorrow, a new featurette has arrived for Jurassic World: Fallen Kingdom which features lots of new footage and plenty of the cast and crew freaking out about how awesome the film is going to be. And Jeff Goldblum’s got a beard.

(12) GARY FISHER IN LAST JEDI, TOO. The cat is out of the bag, and so is the dog: “Carrie Fisher’s Beloved Dog, Gary, Will Appear in ‘Star Wars: The Last Jedi'”.

During the press tour for “Star Wars: The Force Awakens,” Carrie Fisher’s therapy dog, Gary, became an internet sensation as the late actress took him everywhere for interviews and red carpets. Now, an eagle-eyed fan discovered that Gary will be making an Easter egg cameo in “Star Wars: The Last Jedi,” which director Rian Johnson has confirmed.

Twitter user Clair Henry found a promotion still for the movie in which Finn (John Boyega) and Rose Tico (Kelly Marie Tran) face off at a galactic casino. On the left side of the screen, you can see a strange brown creature looking directly at the camera. That’s Gary, touched up with CGI to look like an alien pet.

(13) HELLO . A special wine collection is back in time for the season: “‘Hello Kitty’ Wine Returns In Time For The Holidays”.  The five-bottle collection goes for around $150, but you can also buy individual bottles.

Plans to introduce a “frowning pile of poo” emoji have been flushed from the latest proposals by the group in charge of creating the symbols.

The symbol was floated as one of many to be introduced in 2018, but it angered typographers who said it was “embarrassing” to the group.

The Unicode Consortium pushes out a central list of emoji so that they show up properly on different devices.

It said changes to the “pile of poo” emoji had not been totally dumped.

Chip Hitchcock sent the link with a comment: “IME, the Unicode Consortium can be very random; around the time I started working with character storage, their principles sniffily declared that they were encoding only live characters, and would therefore not do Glagolitic (the alphabet that Cyril’s students developed into Cyrillic) — but they already had Tolkien’s Elvish alphabet(s?). They later relented, don’t ask me why.”

(15) ALL THEY’RE CRACKED UP TO BE. The BBC answers the question, “Why clowns paint their faces on eggs”. Pratchett fans may remember this was a plot point in at least one of his books.

Perhaps the most intriguing part of Faint’s collection, though, are the eggs. Each one is different, and represents the unique face design of its subject. Eggs like these are kept in only a handful of collections around the world, representing a kind of informal copyright – and much more.

One of the oldest and most complete skeletons of humankind’s ancestors has been unveiled in South Africa.

A team spent more than 20 years excavating, cleaning and putting together the skeleton of Little Foot.

Its exact age is debated, but South African scientists say the remains are 3.67 million years old.

…Good citizens of utopia consider the wilderness dangerous, hostile, unlivable; to an adventurous or rebellious dystopian it represents change and freedom. In this I see examples of the intermutability of the yang and yin: the dark mysterious wilderness surrounding a bright, safe place, the Bad Places?—?which then become the Good Place, the bright, open future surrounding a
dark, closed prison . . . Or vice versa.

In the last half century this pattern has been repeated perhaps to exhaustion, variations on the theme becoming more and more predictable, or merely arbitrary.

(19) SPACE COMMAND. Four days left in the Space Command: Redemption Kickstarter. Congratulations to Marc Zicree — they made their goal, and two stretch goals. To celebrate —

A scene from Space Command: Redemption in which Yusef (Robert Picardo) repairs a broken synthetic named For (Doug Jones). For more information about this new sci-fi series, follow this link: