(0) APOLOGY TENDERED. Greg van Eekhout is quite right to be displeased —

Having mixed feelings about my announcement that I don't have a 2016 novel because my parents were slowly dying being called a "trend."

I was so struck with the association sparked between two posts about not having a book out in 2016 that I quite insensitively plowed over the real life causes he was relating. I apologize for making light of his situation.

(1) HOW TO IMPROVE. Sherwood Smith’s post “Beginning Writer Errors” at Book View Café shares the distilled wisdom she found in an old set of notes taken during a Loscon panel by that name.

I think these lists interesting mostly because they reveal writerly process at least as much as they do beginner errors. Some of the best discussion arose out of what some considered no error at all, and others considered advice for revision, not for first draft errors, and what the difference was.

For pants writers (those who sit down and let the tale spin out through their fingers before going back to see what they have) one set of rules might be helpful and another useless; for plotters and planners, a completely different set….

Panelist’s Three’s list suggests to me that that writer works by a completely different process:

To number one, half the panelists disagreed. Note: “transitions are natural chapter breaks.” The writer defended it: “this pattern reads artificial.”

“I was just really paranoid and really depressed and really unhappy and full of really nutty ideas. I would call my dad with my latest crazy ideas and he would patiently listen. He was the only person who could listen to me. And he’d talk me through and explain why my latest idea about being pursued and prosecuted and persecuted was irrational.”

Hill wouldn’t go into what he calls his “terrible, lunatic notions”, because he doesn’t like revisiting them. But eventually his dad suggested that seeing someone professionally could help him out – an idea Hill had resisted because he was convinced the paranoia and “lunatic ideas” were connected to his creativity. “I thought if I got help, I wouldn’t be able to write any more.”

It all goes back to another cliché: the crazy artist. But as a crazy artist, he got no actual work done. The three novels he couldn’t finish are testament to that cliché being bullshit.

“I got into therapy and I got on a pill, and what I discovered was getting help didn’t make me less creative. What was making me less creative was being a depressed crazy person. Figuring out how to be happy and have fun with the kids again, how to have fun with my life and work, actually made me a better writer, not a worse writer.”

(3) BEST SF FILMS OF 2015. JJ says Brian Merchant’s “The 11 Sci-Fi Films That Defined 2015”at Motherboard is “A ‘Best SF Films’ list that isn’t just a re-hash of other lists.” Part of the proof – The Martian ranks ahead of The Force Awakens – and three other movies rank above them.

The major themes that bubbled up in the year’s science fictional slipstream included income inequality, artificial intelligence, transgender rights, and the power and necessity of the scientific endeavor itself. Young adult dystopias showed signs of flagging, while classic-mold sci-fi mega franchises boomed (with one exception). There were not one but two great feminist-leaning SF films; one a bona fide blockbuster hit, another a powerful, slow-burning indie. There was an already-beloved animated short about our possible futures.

(4) THE HEISENBERG CERTAINTY PRINCPLE. Jonathan M is right, however, it is equally clear that when no one was paying attention to them, they were not starved out of existence for lack of it.

@jsuttonmorse People fucking LOVED last year's shenanigans. The traffic they were getting via file770 justified every slur and posture.

(5) STEAMING PILE. Just one person’s opinion, but I think this logo (first posted last April) isn’t that different from the real 1988 Hugo Award base. 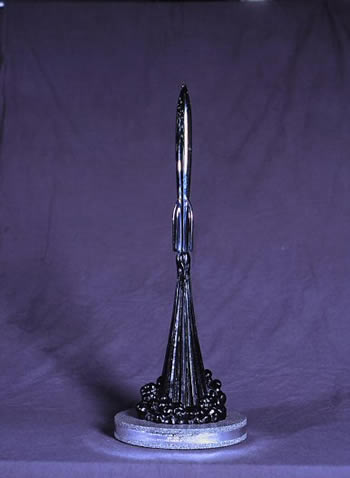 1988 Hugo Award base by Ned Dameron

The Brooklyn native appeared in three episodes of The Twilight Zone, most notably portraying the real train conductor in the 1960 episode in “A Stop at Willoughby.” …[He] died a memorable death as Dr. Linke on the 1968 Star Trek episode “The Empath.”

… On The Empire Strikes Back (1980), Wingreen auditioned for the part of Yoda. He didn’t get that role (Frank Oz did), but he was given four lines of dialogue spoken by the masked Boba Fett, the feared bounty hunter who captures Han Solo (Harrison Ford).

“I think the actual work, aside from the hellos and goodbyes and all that, could have been no more than 10 minutes,” he said. He received no credit for his work (it didn’t become publicly known that the voice was his until about 2000)…

In 1979, there was yet another Globetrotters cartoon, The Super Globetrotters, in which they became super heroes, but Lemon was not part of that mix. That same year, though, he co-starred in the fantasy comedy theatrical feature film, The Fish That Saved Pittsburgh (along with Julius Erving (Doctor J!), Debbie Allen and Stockard Channing). According to some sources, the movie–about a failing professional basketball team, saved by stocking its roster according to the players’ astrological signs–has developed something of a cult following….

(9) FIFTH! “Indiana Jones 5 Confirmed By Disney” is the headline. Tarpinian’s suggestion for the movie title is “Indiana Jones and the Rocking Chair of Gold.”

Speaking to Yahoo earlier in 2015, Spielberg said he’ll likely work on the film and that it would star Harrison Ford. Bradley Cooper and Chris Pratt were rumoured to play a younger version of the archeologist.

He said: “Now I’ll probably do an Indy 5 with Harrison, [so] it’ll be five for Harrison, four for Tom [Hanks].”

In a separate interview with French radio RTL, Spielberg said: “I am hoping one day to make it to an Indiana Jones V. I would hope to make it before Harrison Ford is 80 and I get much older.”

Spielberg’s quotes suggests that both he and Harrison Ford are on board for the sequel, though neither has officially said as much.

(10) FIRST! While you’re waiting for the new Indy film, Open Culture recommends you click on “Great ‘Filmumentaries’ Take You Inside the Making of Spielberg’s Raiders of the Lost Ark & Jaws“.

Even casual filmgoers will recognize these movies, and they’ll feel, shortly after pressing play on [Jamie] Benning’s Inside Jaws and Raiding the Lost Ark, as if they’ve just settled in to watch them again, though they’ll see them as they never have before. Serious film fans will, as the form of the filmumentary emerges, recognize the basis of the concept. Described as “visual commentaries,” these productions take the concept of the commentary track and step it up considerably, overlaying the original film’s soundtrack with the words of a veritable chorus of those who worked on it — actors (even some not ultimately cast), crew members, designers, producers, hangers-around — sourced and sometimes even recorded by Benning.

(11) LOGAN’S RUN AND AUTHOR APPEARANCE. William F. Nolan, co-author of Logan’s Run, will be on hand when the Portland Geek Council presents the film Logan’s Run on January 17.

(12) TWU WUV.  “Jared Weissman Made Harry Potter Fictional Wizard’s Broomstick For Girlfriend”. With DIY photos taken as he made a copy of the Nimbus 2000.

“Shelby has been obsessed with Harry Potter for a long time now and about a year ago decided she wanted to start collecting prop replicas,” Weissman told Mashable in an email. “We went to the Wizarding World of Harry Potter this past summer where she bought the Sorcerer’s Stone, Tom Riddle’s diary, and a plaster scroll that says Dumbledoor’s Army with 6 wands mounted on it (Harry, Ron, Hermoine, Luna, Neville, and Ginny).”

From that point on, it was pretty clear to Weissman what the perfect Christmas gift for Shelby would be.

(13) FROSTY PERSONALITY. The Game of Thrones parody “Winter Is Not Coming” is a French commercial from Greenpeace about climate change.

(14) IMPERIAL TRAILER PARK. If you’re not burnt out on Star Wars stuff, Mark-kitteh recommends a fan-made trailer for Empire Strikes Back, deliberately aiming for a modern trailer style. Mark adds,

For reference, I found a vid of the 1979 original as well. It’s an interesting contrast – the original has a fun high-energy vide, but is a bit too breathless (and spoiler-filled!) for modern tastes.

[Thanks to Mark-kitteh, Will R., JJ, Nigel, and John King Tarpinian for some of these stories. Title credit goes to File 770 contributing editor of the day JJ.]