(1) ANOTHER ONE BITES THE DUST. GoodEReader reports “Audio Realms is out of business”.

Audio Realms has gone out of business and they have taken their main website and Facebook Page offline. They have provided no indication on what prompted their company to suspend operations. Some of their audiobook content remains available on Audible and Overdrive.

Some customers are irate who purchased Audio Realms content on Audiobooks.com. It seems that when the company want out of business all of the purchased content has disappeared from customers libraries and they have no way to access them.

The Horror Show podcast from November has info on how affected creators can stop further sales of their work (apparently AR was not paying creators what they were owed), around the 36:58 mark.

(2) GORN BUT NOT FORGOTTEN. Fifty years ago this week Captain Kirk dueled the Gorn.

The lumbering green guy appeared in the original series’ 18th episode, “Arena.” The episode was based on a short story written by Frederic Brown and published in Astounding magazine back in 1944.

In the memorable Star Trek version, Captain Kirk is transported to a rocky planet (aka California’s alien-appearing Vasquez Rocks) to duke it out to the death with the Gorn captain. We won’t give away the ending in case you’re saving all the original episodes for a rainy day or something, but let’s just say that there is not one thing about the Gorn that is not awesome…

(3) SFRA CALLS. The Science Fiction Research Association has put out a call for panel and presentation proposals for its SFRA Annual Conference, June 28 to July 1, 2017 at University of California, Riverside.

The conference theme will be Unknown Pasts / Unseen Futures and our keynote speaker is Nnedi Okorafor. This theme grows out of the 2016 conference, whose conversations reminded us that there is so much about the history of science fiction that has yet to be sufficiently addressed in scholarship, including marginalized or otherwise neglected bodies of work. The future of scholarship in the field can be opened up to new possibilities through this return to under examined elements in our genre’s past, opening it up to futures that are as-yet unanticipated in existing fictional and scholarly visions. This conference theme also reflects UCR’s commitment to science fiction scholarship that is focused on imagining and creating sustainable and inclusive futures. Thus our focus is equally on new voices in the field and the new kinds of futures that emerge from this broader sense of the field’s membership.

This first to be recorded this visit took place at the Ukranian restaurant Veselka, which turns out more than 3,000 pierogi each day, and has been around since 1954. My guest that afternoon was editor Ellen Datlow, who for more than 35 years has brought readers amazing stories in magazines such as Omni, on sites such as SCI FI Fiction, and in anthologies such as Fearful Symmetries, The Doll Collection, and more than 90 others.

We discussed why reading slush is relaxing, which editors she wanted to emulate when she began editing, how she winnows down her favorite stories for her Year’s Best anthologies, the complexities of navigating friendships when making editorial decisions, how Ed Bryant challenged her to become a better editor, and much more. 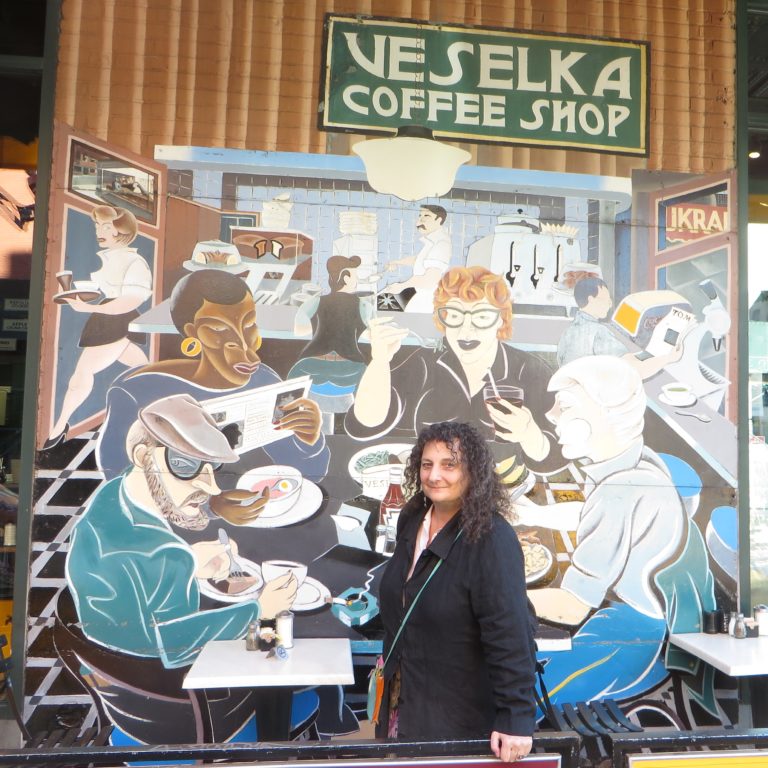 In another shocking loss, we say goodbye to the actor who went from the helm of the USS Excelsior to the labs of OCP where RoboCop was built, from aiding Agent Dale Cooper in the town of Twin Peaks to Vice President of the Marvel Cinematic Universe.

His first major role having been in Paul Verhoeven’s RoboCop, he also had roles in William Friedkin’s The Guardian, Jim Abrahams’ Hot Shots! Part Deux, and as a voice actor in Disney’s Mulan and Justice League: The New Frontier as Martian Manhunter, but it was on television that he created the roles for which he is most famous.

Other television roles included Magnum, P.I., T J Hooker, Miami Vice, Tales from the Crypt, David Lynch’s On the Air, Will & Grace, 3rd Rock from the Sun, Robot Chicken, Law & Order: Criminal Intent, Lie to Me, Psych, Desperate Housewives and most recently a long-running role as Assistant Director Owen Granger on NCIS: Los Angeles, and it has been confirmed that he will be seen again later this year as Albert Rosenfield when Twin Peaks returns this summer.

The son of singer Rosemary Clooney and actor José Ferrer, the Padishah Emperor Shaddam IV in David Lynch’s Dune, his cousin George is also in the acting business.

Columbus book dealer Larry Smith (b.1946) died on January 20. Smith co-chaired the Columbus in 1976 Worldcon bid as well as chairing Marcons III-XII. He served as a vice-chair for Chicon IV in 1982. He also co-charied OVFF in 1998 and World Fantasy Con in 2010. In the early 1990s, he purchased Dick Spelman’s book business and, along with his wife, Sally Kobee, has sold books and most conventions in the Midwest and East Coast. He has managed the dealer’s room at numerous Worldcons and other conventions.

Smith and his friend Robert Hillis suffered repeated frustrations trying to get a WSFS convention for Columbus, OH – a city which was not very many fans’ idea of a tourist mecca. Later they did get to apply their talents to winning a 1982 Worldcon bid (led by Larry Propp and Ross Pavlac) for Chicago, a city fans would vote for.

In the past couple of decades Smith became an iconic convention bookseller, together with his wife Sally Kobee. If the business didn’t make them rich, just the same it did get them noticed by Forbes Magazine. 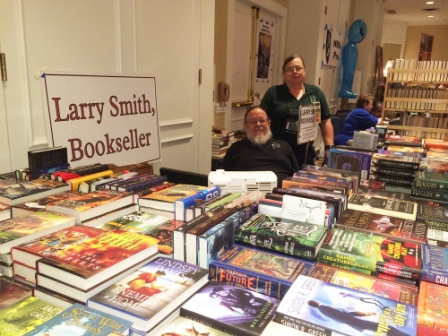 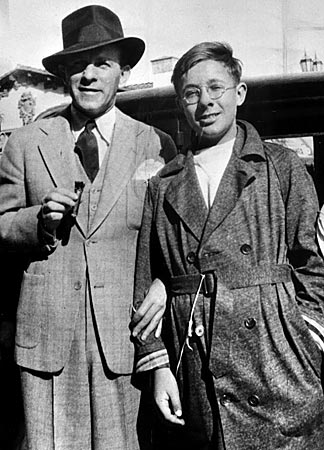 (10) OH POOH. Five days left for you to bid on a drawing of Pooh and Piglet by the canonical illustrator. The minimum bid is $45,000.

Beautifully rendered watercolor and ink drawing of Winnie-the-Pooh and Piglet by E.H. Shepard, the illustrator chosen by A.A. Milne to bring his literary characters to life. Here, Shepard draws Pooh and Piglet upon a letter to his agent, allowing the characters to express his feelings of gratitude and joy. 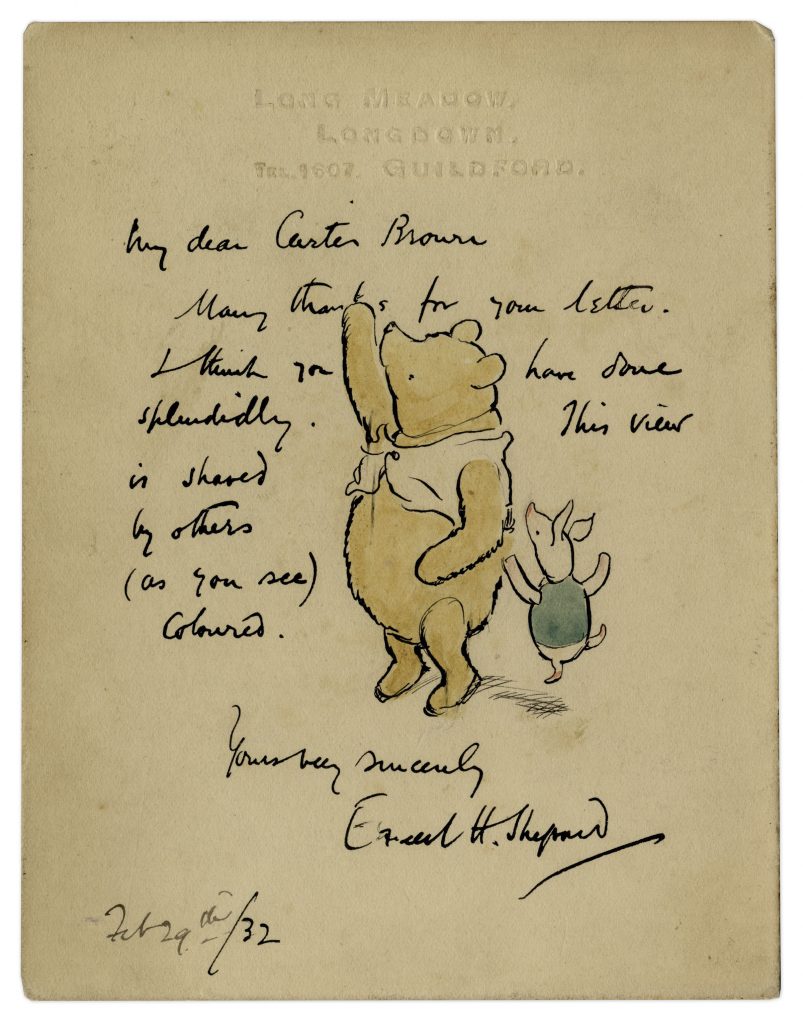 It’s perfect timing, then, for the publication of Martians Abroad. The novel is the latest from New York Times bestselling author Carrie Vaughn, best known for her Kitty Norville urban fantasy series. But rather than involving werewolves in modern-day America, Martians Abroad sets its sights on the human-colonized solar system of tomorrow.

That said, most of Martians Abroad — as the title states — doesn’t take place on Mars at all. The majority of the action takes place on Earth. Polly Newton is a typical teenager — that is, a typical teenager living on Mars’ Colony One, where her mother is the director of operations. She sends Polly and her twin brother Charles to Earth to attend Galileo Academy, a prestigious school full of the scions of the most powerful families in the solar system. Polly and Charles are the first Martians to enroll at Galileo, partly because Mars is less wealthy and seen as a bit of a hick planet. (Not that Polly wants to go to Earth in the first place — she’s forced to abandon an upcoming internship as a starship pilot, something she desires more than anything.)

Chip Hitchcock sent the link with the gratuitous plea, “I hope they’re wrong about it being an homage to Podkayne of Mars, one of Heinlein’s more repellent books.”

[Thanks to John King Tarpinian, Chip Hitchcock, Cat Eldridge, Christa Cook Sinclair, David K.M. Klaus, Martin Morse Wooster, and JJ for some of these stories. Title credit belongs to File 770 contributing editor of the day IanP, who never gets woolly.]