(1) WIRE TOWN. The UK’s Daily Mail ran a photo gallery, “A city balancing on The Wire: Eerie pictures capture the lonely beauty of Baltimore’s Street corners at night revealing another side to its crime-ravaged neighborhoods”, and contrary to what you might expect from a collection with that title, the first picture is of the Baltimore Science Fiction Society clubhouse. (2) MY LUNGS REMEMBER SASQUAN. The Darwin Award candidates responsible for the wildfires during Sasquan, the 2015 Worldcon, have been sentenced. “Vancouver men who started wildfire ordered to pay state $2.3 million” reports The Oregonian.

Three Vancouver men responsible for setting fire to 110 acres of forest in southwestern Washington have been ordered to pay the state more than $2.3 million in firefighting costs.

The Daily News reports Nathan Taylor was sentenced Monday and all three defendants were ordered to pay damages the state Department of Natural Resources.

London’s sole foray into the realm of science fiction and fantasy is simultaneously a hard-bitten, minimalist monologue about life in solitary confinement and an exuberant tour of the universe. The book’s narrator, Darrell Standing, moves disarmingly from the agony of his confinement in a strait-jacket to his travel amidst the stars equipped with a glass wand that allows him to access an infinity of past lives, including a fourth-century hermit, a shipwrecked seal-hunter, a medieval swordsman, and a confidant of Pontius Pilate. It is a novel about sensory deprivation in a shared reality, and sensory overload in a private one.

This is a deeply eclectic book. It borrows liberally from the forebears of the fantasy genre: fairy stories, Norse legend, Greek myths. But it also manages to include feuding UC Berkeley scientists, “dope fiends,” Neolithic hunter-gatherers, kimchi, and a journalistic exposé of the modern prison system. The bizarre multiplicity is precisely the point. London’s narrative does many things, but it always seems to circle back to the question of how the worlds encompassed within a single consciousness can interfere with the shared reality of modern society. As we hurtle towards a near future of immersive virtual reality and unceasing digital connectedness, The Star Rover has much to tell us.

(4) NEIL GAIMAN IS THE PRIZE. A reading of Edgar Allan Poe’s “The Raven” by Neil Gaiman is a Worldbuilders Fundraising Reward.

The Worldbuilders charity passed its stretch goal of a million dollars, so I lit a whole bunch of candles, put on a coat once worn by a dead brother in the Stardust movie, and I read Edgar Allan Poe’s poem THE RAVEN by candlelight. You can donate to Worldbuilders at worldbuilders.org. And you should.

(5) NUMBER FIVE. The Traveler at Galactic Journey marvels at the recent development of radio astronomy in “[Dec. 10, 1961] By Jove! (Jupiter, the Fifth Planet)”.

In the last ten years or so, a brand new way of looking at Jupiter has been developed.  Light comes in a wide range of wavelengths, only a very small spectrum of which can be detected by the human eye.  Radio waves are actually a form of light, just with wavelengths much longer than we can see.  Not only can radio be used to communicate over long distances, but sensitive receivers can tell a lot about the universe.  It turns out all sorts of celestial objects emit radio waves.

Jupiter is one of those sources.  After this discovery, in 1955, astronomers began tracking the planet’s sporadic clicks and hisses.  It is a hard target because of all of the local interference, from the sun, our ionosphere, and man-made radio sources.  Still, scientists have managed to learn that Jupiter has an ionosphere, too, as well as a strong magnetic field with broad “Van Allen Belts.”  It also appears to be the only planet that broadcasts on the radio band.

Using radio, we will be able to learn much about King Jove long before the first spacecraft probes it (perhaps by 1970 or so).  It’s always good to remember that Space Age research can be done from home as well as in the black beyond.  While I am as guilty as the next fellow of focusing on satellite spectaculars, the bulk of astronomy is done with sounding rockets and ground-based telescopes – not to mention the inglorious drudgery of calculations and report-writing, universal to every science.

(6) HINES BENEFIT AUCTION #14. The fourteenth of Jim C. Hines’ 24 Transgender Michigan Fundraiser auctions is for an autographed coy of Impulse by Steven Gould.

Today’s auction comes from award-winning author and former SFWA president Steven Gould, who’s offering an autographed first edition hardcover copy of his novel IMPULSE, which is currently being developed for a pilot on YouTube Red.

Steven Gould returns to the world of his classic novel Jumper in Impulse.

Cent has a secret. She lives in isolation, with her parents, hiding from the people who took her father captive and tortured him to gain control over his ability to teleport, and from the government agencies who want to use his talent. Cent has seen the world, but only from the safety of her parents’ arms. She’s teleported more than anyone on Earth, except for her mother and father, but she’s never been able to do it herself. Her life has never been in danger.

Until the day when she went snowboarding without permission and triggered an avalanche. When the snow and ice thundered down on her, she suddenly found herself in her own bedroom. That was the first time.

(7) TOBLER’S PICKS. The Book Smugglers continue their year-end theme: “Smugglivus 2016: Books That Surprised Me (In a Good Way) by E. Catherine Tobler”. They published Tobler’s short story “The Indigo Mantis” earlier this year.

I did not expect to read another Star Wars novel in my lifetime; the expanded universe of books was never wholly my thing. I liked the Han Solo novels (A.C. Crispin) well enough, but could not get into the Thrawn books, or anything tackling Leia. And then, Bloodline showed up. Bloodline spends some time with Leia after Jedi and before The Force Awakens and let me say, I never realized how much I missed not seeing Leia be allowed to grieve over the loss of Alderran. Gray gives us that and much more, unpacking and exploring Leia’s marriage with Han Solo, and yes, her relationship to Darth Vader. Such a satisfying read.

A cable that’s as long as six football fields has been launched into orbit — and when it’s deployed, it’ll test an idea to knock out orbital debris. Japan’s space agency sent the electrodynamic tether into space along with supplies for the International Space Station.

Reels aboard the Japan Aerospace Exploration Agency’s Kounotori 6 craft will deploy the 700-meter (2,296 feet) tether, essentially unspooling a clothesline in space that could help clean up the roughly 20,000 pieces of potentially hazardous space debris that are tracked by systems on Earth.

Those pieces of junk are dangerous enough on their own — but they can also generate thousands more smaller pieces of debris if they collide, creating even more risk to the space station and satellites orbiting the Earth.

With the official acronym of EDT (for electrodynamic tether), the Kounotori’s cable “is a promising candidate to deorbit the debris objects at low cost,” JAXA says.

Though a few of the stories — Alhaboby’s “Baghdad Syndrome,” Hassan’s “The Here and Now Prison,” and Ibrahim al-Marashi’s “Najufa” — are warm and hopeful, focused on love, family, and friendship, overall the collection hurts. Underlying these pieces are exhaustion, disgust, contempt, disillusionment, all of which Western readers of speculative fiction will no doubt find alienating; built into our narrative of fiction’s usefulness is a sense of healing, catharsis, nourishment that this collection resists. Thoughts of the future are rooted in the recent past and present, leeching poison from its earth, and what grows can’t be separated from that soil, as when Alhaboby writes “I knew that soon my vision would start to go the way the lights once did over Baghdad all those years ago … You see, if you’re a sufferer of Baghdad Syndrome, you know that nothing has ever driven us, or our ancestors, quite as much as the syndrome of loving Baghdad.”

Mr Aldrin’s manager, Christina Korp, tweeted a photo of him on the flight home, saying they hoped to return again.

“But next time for vacation and not evacuation,” she wrote.

Mr Aldrin began showing signs of altitude sickness, including low oxygen levels and congestion in his lungs, after reaching the South Pole.

“Once I was at sea level I began to feel much better,” he said last Sunday.

(13) ENGLISH EVOLVING BEFORE YOUR EYES. Thanks to everyone at work in the File 770 comment laboratory….

Been thinking about the whole how to refer to the alt-whatever folks, and my fave so far is "technically not Neo-Nazis".

Going forward, I'm using that one.

And that's not mine, I stole it from a File770 comment by Greg Hullender.

(15) CHRISTMAS HORROR AND SHATNER – TOGETHER! Hampus Eckerman, inspired by a link in the last Pixel Scroll, decided to check online for more Christmas Horror movies. And he found the most horrific of al – one starring William Shatner(!)

In A Christmas Horror Story, Shatner is the DJ who sets the scene — 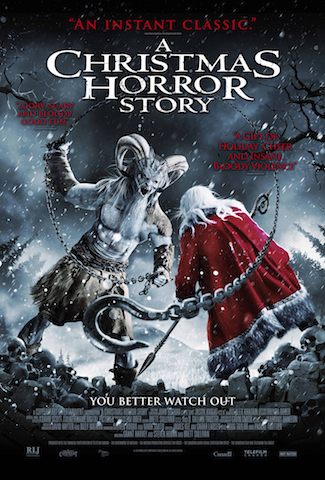 (16) STAR TREK CHRISTMAS. Here’s how the franchise paid tribute to the Christmas season.

The Voyager crew give their take on the 12 days of Christmas.

[Thanks to JJ, Chip Hitchcock, Eva Whitley, Martin Morse Wooster, and John King Tarpinian for some of these stories. Title credit goes to File 770 contributing editor of the day Anna Nimmhaus.]