(1) LEMMY WAS A FAN. Lemmy of Motörhead fame died last night. But did you know about his love for Science Fiction and Fantasy? See “Parting Shots: Lemmy” reposted from a spring 2011 issue of Relix.

“I recently bought a complete set of the Elric of Melniboné fantasy books by Michael Moorcock. One of them is dedicated to you. Are you still friends with him?

Yeah, I haven’t spoken to him in years, though. He’s in Texas someplace. I did want to get in touch with him actually. Somebody was gonna text me his number but they didn’t do it. I must get ahold of him.

In addition to working with Moorcock in Hawkwind, you were in the 1990 movie Hardware. Are you a big science fiction fan?

(2) JEMISIN BRANCHES OUT. N. K. Jemisin talks about the debut of her New York Times Book Review column “Otherworldly” in “My New Side Gig”.  (The first installment is already online.)

I’m an eclectic reader, so the new column will obviously feature science fiction, fantasy, horror, some YA, some graphic novels, some anthologies, and even some nonfiction where it impacts the genre. I’ve got no problem with self-published or small-press books, although I believe the NYT has a policy forbidding selfpubs if they can’t be found in “general interest” bookstores, whatever that means. I like books that feature complex characters, period, but stereotypes piss me off and stuff I’ve seen too often bores the shit out of me. I don’t “believe in” the Campbellian Hero’s Journey, for pretty much the same reasons as Laurie Penny. Obviously I’ve got a thing for worldbuilding and secondary world or offworld stuff. I believe wholeheartedly in the idea that we all should get to dream, and I look for books that let me.

(3) FUTURE OF WHO. ScienceFiction.com gives a rundown on the major players signed for the next season of Doctor Who.

Leaving is a constant theme on ‘Doctor Who’ as even the role of the title character regularly shifts to new actors.  This past season saw the departure of the longest running companion in the show’s history, Clara Oswald played by Jenna Coleman.  And recently, the 12th Doctor, Peter Capaldi has hinted that he wants to exit in order to focus on directing.  But like Moffat, he is signed on for at least one more season.

Moffat wrote the latest Christmas Special as though it might be his last reports Digital Spy.

Steven Moffat hadn’t signed for a 10th series of Doctor Who when he wrote this year’s Christmas special.

The showrunner told press including Digital Spy that he thought the festive episode could be his last ever for the show.

“I hadn’t signed for next year at that point,” he confirmed. “I have now – unless they fire me, which would be quite sensible!

“I thought it might be the last one, so to get River (Alex Kingston) in – that was bringing me full-circle…”

Cozy up with Nyarlathotep on those long, dreary nights with this Cthulhu bedding by Melissa Christie. Set includes one Queen-sized duvet cover (86″x86″) and two pillowcases (20″x30″) printed on 100 percent cotton with eco-friendly inks. Available on white, blue or weirdo purple fabric. 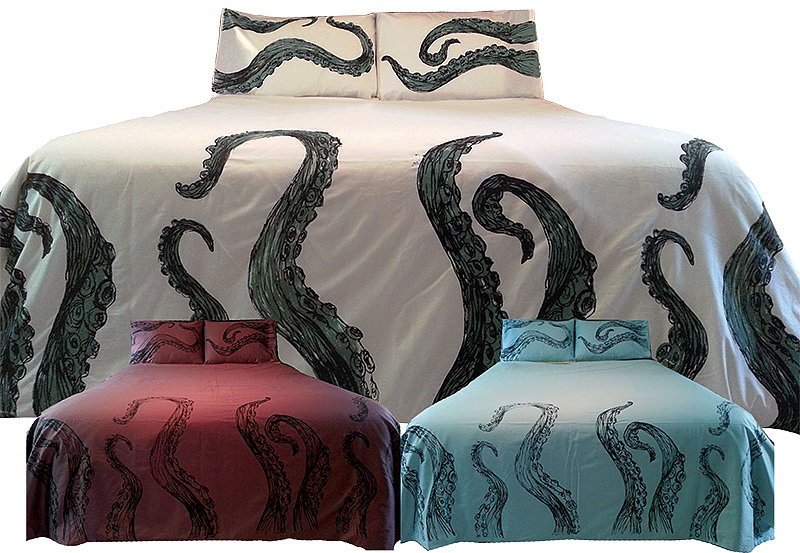 (5) POLAR PUN. James H. Burns writes: “Our friends in Alaska and other areas up North have also long been familiar with ‘The Force.’

(6) GROTTA OBIT. Daniel Grotta of Newfoundland passed away December 13 in Philadelphia. He was known for his 1976 biography J.R.R. Tolkien: Architect of Middle Earth, in print for more than 30 years.

I understand that one of my constant detractors is asserting that the reason the first book of my new contract comes out in 2017 and not 2016 is because I turned in a manuscript and it was terrible and now Tor is trying to salvage things. This is the same person, if memory serves, who asserted that Lock In was a failure and Tor was planning to dump me, shortly before Tor, in fact, handed me a multi-million dollar contract, which included a sequel to Lock In.

Now, as then, his head is up his ass and he’s speaking on things he knows nothing about. I haven’t turned in a manuscript; there’s no manuscript to turn in. They (remember I’m working on two) haven’t been written yet. To be clear, the only thing I’ve turned in to Tor since submitting my manuscript for The End of All Things is my contract for the next set of books. That was accepted without any additional revision, I would note.

For the avoidance of doubt, you should assume that any speculation about me or my career coming from that quarter is based on equal parts of ignorance, craven maliciousness, and pathetic longing for my attention, and almost certainly false. Anything said by that person about me is likely to be incorrect, down to and including indefinite articles.

(8) LOVE IN THE RUINS. Earlier in the day Scalzi scoffed at another rant in “I Ruin Everything But Mostly Science Fiction”

Here’s the thing: If I ruin the genre of science fiction for you, or if the presence in the genre of people whose politics and positions you don’t like ruins the genre for you — the whole genre, in which hundreds of traditionally published works and thousands of self-and-micro-pubbed works are produced annually — then, one, oh well, and two, you pretty much deserve to have the genre ruined for you. It doesn’t have to be ruined, mind you, because chances are pretty good that within those thousands of works published annually, you’ll find something that rings your bell. And if you do, why should you care about the rest of it? It’s literally not your problem. Find the work you’ll love and then love it, and support the authors who make it, hopefully with money.

(9) ANALYZING HUGO PARTICIPATION. Kevin Standlee is gathering data to help answer whether Hugo voter participation is expanding at the same rate as the eligible voter base.

What is unclear (and even now still is unclear) is whether the percentage of eligible members is actually increasing. WSFS has been steadily increasing the nominating franchise, bringing in first the previous year’s members and then the following year’s members, so that the eligible nominating electorate is he union of three years of Worldcon members as of January 31 each year, a group that could be more than 20,000 people at times, compared to the fewer than 5,000 previously eligible prior to the expansion of the franchise. It’s actually possible that the percentage of eligible members participating has gone down even as the absolute number of nominations has gone up.

First: JOHN PICACIO http://www.johnpicacio.com/ Yes, John is a past winner. Truth be told, he is one of the current crop of Usual Suspects. He was nominated for the first time in 2005, and lost. Thereafter he was nominated every year from 2006 to 2011, losing every year and winning a place of honor in the Hugo Losers party… until he finally broke through and won in 2012. He won again in 2013, lost to Julie Dillon in 2014, and was squeezed off the ballot by the Puppies last year.

(11) KEEP THOSE REVIEWS COMING. Another review of “The Long Way to a Small, Angry Planet by Becky Chambers” by Federhirn at Bastian’s Book Reviews

It’s a well-written book. The prose flows pleasantly, there is a sense of fun and joyfulness about it, and the story plods along from one feel-good scene to the next. Unfortunately, there isn’t really much of an overarching plot. The story is episodic, with almost every chapter telling a different episode of their journey. It’s a cheerful road movie in space.

One thing which is very obvious is that the story was inspired by Firefly and seemingly created from a wish list of themes and ideas that the people derogatorily called ‘Social Justice Warriors’ might have come up with. (Social Justice Warriors are people who want a more equal world, with opportunities for all, and a more diverse, multicultural, multiracial, multisexual representation of life in fiction)….

(12) PUPPY CENSUS. Brandon Kempner at Chaos Horizons ends the year by “Checking in with Sad Puppies IV”. His count shows John C. Wright’s novel Somewhither currently has 12 recommendations, more than any other.

Invariably, when the topic of galactic empires comes up, someone will reference Star Wars—the muddy details of the Empire’s economy and structure, maybe a few pointed jokes about trade disputes. Yet as cool as some of the principal officials of the Empire’s vast bureaucracy are (do we ever find out Darth Vader’s official title? Does he get a pension?), the Empire is actually only the eighth or ninth most interesting galactic empire in science fiction. Which ones are more exciting? Glad you asked: Here are the six most interesting empires stretching across time and space in SF lit.

(14) CLASSIC TREK. A 16mm print of the second Star Trek pilot preserves an experiment with a radically different style of introduction. The smiling Spock in the first scene is even more unexpected.

The original print from Star Trek’s 2nd pilot was never aired in this format. Had different opening narration, credits, had acts 1 thru 4 like an old quinn martin show and had scenes cut from aired version and different end credits and music. The original 16mm print is now stored in the Smithsonian oddly enough the soundtrack for this version was released with the cage.

[Thanks to Jim Meadows, Andrew Porter, Hampus Eckerman, John King Tarpinian for some of these stories. Title credit goes to File 770 contributing editor of the day ULTRAGOTHA. ]

186 thoughts on “Pixel Scroll 12/29 ’Twas Pixel, And The Slithy Scrolls Did Gyre And Gimble In The Wabe”