(1) WHO WILL BE WHO? Would you put money on it? Bookmakers say Tilda Swinton is a favorite to become the next Doctor Who.

Actress Tilda Swinton is the frontrunner to become Doctor Who’s next Time Lord, according to the latest bookmakers’ odds.

The Oscar-winning British star would take over the role from departing actor Peter Capaldi, who recently announced he is stepping down from the series this year after entering the Tardis in 2013.

Ladbrokes has said Swinton, 56, has been the focus of a “huge gamble” from punters, with her odds now at 7/2 after initially having entered the market at 10/1.

Other names in the running include Death In Paradise’s Kris Marshall at 4/1, Broadchurch’s Olivia Colman at 5/1 and Maxine Peake, best known for Dinnerladies and Shameless, at 8/1.

(2) REACTION. In the Scroll two days ago I excerpted Maya Kaathryn Bohnhoff’s Book View Café column, “There’s a Bimbo on the Cover Verse 8: Who Reads Reviews, Anyway?”, which humorously displays her scars from a Locus review of her fiction by Mark R. Kelly.

Kelly read the column and replied –

Odd. I haven’t reviewed short fiction for Locus since 2001. And the general comments about Analog that she quotes was from one of my first columns, in 1988!

(3) SUCCESS. Tony C. Smith’s Kickstarter for Everyone: Worlds Without Walls has funded.

I’m so pleased for all the writers involved. This is now a great showcase for them. This is a time to open doors and knock down walls not build them up. This anthology is my little answer to highlighting and showcasing just what this beautiful world has to offer.

Smith celebrated reaching this milestone by announcing he has added to the book “an amazing story from top speculative writer Lavie Tidhar!”

(4) DOUBLY FANTASTIC PODCAST. Once upon a time, Scott Edelman’s guest on the Eating the Fantastic podcast edited the prozine Fantastic. He is the celebrated (and at times controversial) Barry N. Malzberg. 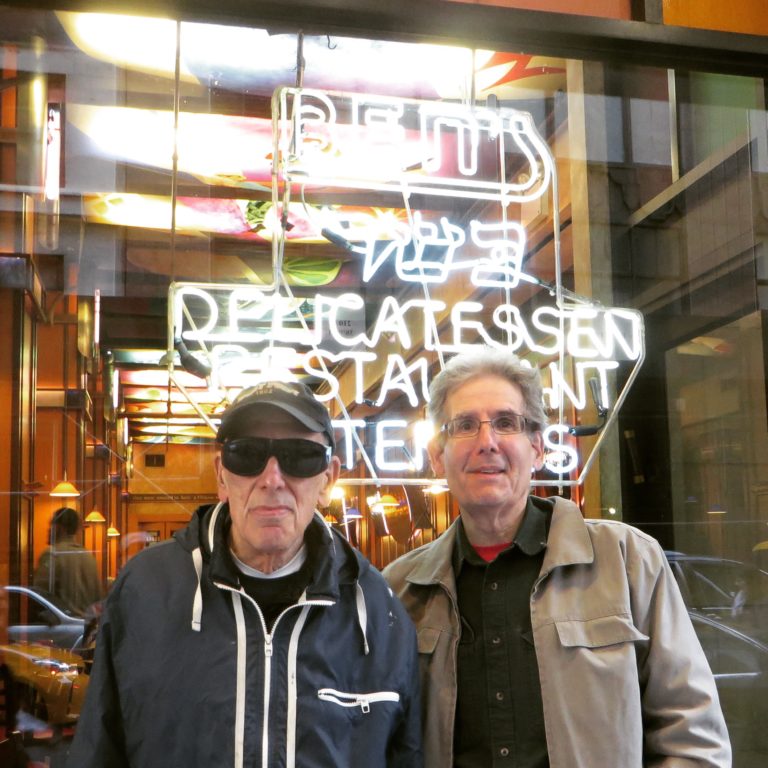 My guest loves Ben’s more than any other NYC deli, and who am I to turn down Barry N. Malzberg, who among other things, was winner of the first John W. Campbell Award for his novel Beyond Apollo, and both a Hugo and Nebula Award finalist for stories I published when I was the editor of Science Fiction Age magazine?

One unusual aspect to this episode is that it features as mere onlooker a writer deserving of his own episode someday—Paul Di Filippo, who felt compelled to come along and witness this recording. After all, the first of his more than 100 published stories was a Malzberg homage!

Barry and I discussed why being able to sell his first drafts was so important at the beginning of his writing career, how his debut short story collection came to be published under the pseudonym K. M. O’Donnell, what it was like to edit both Amazing and Fantastic magazines during the late ’60s, the identity of his greatest discovery during his years at the Scott Meredith Literary Agency, what’s up with the long-promised movie version of Beyond Apollo, how Harry Harrison could have (but didn’t) shut down the filming of Soylent Green, and more.

(5) EYEWITNESS. Zen Cho, inspired by Likhain‘s “Letter to Apex Editors Re: The Intersectional SFF Roundtable,” has written about her experiences with Requires Hate/Benjanun Sriduangkaew, in “Being an itemized list of disagreements”.

I am writing this for two sets of people. One set is the people who were targeted by RH/BS and friends or were otherwise made to feel that fandom was a hostile place because of her conduct and that of her friends and supporters.

The second set is the people of colour/non-white people who continue to interact with RH/BS. Those who participate in roundtables with her, include her stories in their anthologies, and boost her work and opinions as though she is a totally normal, OK person who has never indulged in public, worryingly detailed fantasies of violence against other human beings in her life.

To this second audience: you can talk to and work with anyone you want. We need to talk to people we disagree with, and hanging out with a person online doesn’t of itself mean you condone their behaviour. However, I want you to make sure you have thought carefully about what you are doing…

(6) WITH MANY OTHER WORDS. Adam Whitehead at The Wertzone lists the “Longest SFF Novels of All Time” in an epic post worthy of his topic. Note — after you get past #1 the titles should be more familiar.

(7) BRADBURY FILM FEST AT IU. “Ray Bradbury: From Science to the Supernatural” will be the focus of a special four-day film series at IU Cinema on Indiana University’s Bloomington campus beginning March 24. The series, which includes lectures and panel discussions, was programmed by the Center for Ray Bradbury Studies.

“Every session has fascinating cultural connections,” said Eller, an IUPUI Chancellor’s Professor who is also the editor of Bradbury’s early collected stories and the author of two Bradbury biographies. “The Academy Award-nominated ‘Icarus Montgolfier Wright,’ a story of our quest to reach the moon, was screened in the Kennedy White House just as those dreams were beginning to move toward reality.”

(8) GETTING THERE. Con or Bust helps fans of color go to SFF cons. It is funded through donations and an online auction held annually. The group’s first newsletter includes a link to available memberships in upcoming cons, plus an account of how many donated memberships were used. For example —

(10) LADY BUSINESS. The editors of Lady Business have provided their “2017 Hugo Nomination Recommendations”.

Another year, another Hugo nomination season! Once again, nominations for the Hugo Awards are open, to anyone who is currently a member of this year’s upcoming Worldcon in Helsinki, last year’s Worldcon in Kansas City, or next year’s Worldcon in San Jose, CA [“a.k.a., my neck of the woods. Come to San Jose! We’ll all hang out!! It’ll be great!!!” — KJ]. Nominations are open until mid-March (March 17th or 18th, depending on your time zone), so that’s plenty of time to read all those things you’ve been meaning to get to before nominations close… right?

Never fear, the editors of Lady Business are here to provide our suggestions as you decide what to prioritize on your TBR. Of course, this is by no means a comprehensive list of everything that might be worthy of a Hugo nomination, nor is it meant to be. It’s just a selection of some of the things we loved in 2016, and a few reasons why we loved them, along with some books, stories, and shows we’re still hoping to check out ourselves. Each editor’s opinions are their own, although we suspect you’d find a fair amount of agreement if we had sat down to discuss our picks.

“43 Responses to ‘In Memory of Dr. Alexandra Nako'” by Barbara A. Barnett — You might guess from my selections in this category that I enjoy short stories that take advantage of unusual storytelling formats, and you’d be right. A fascinating and creepy story that gets the feel of an Internet comments section just right. [KJ]

“The Fifth Gable” by Kay Chronister — This is a beautifully written and haunting and somewhat disturbing (I love it) story about creation and having children and loss. I’m not sure what more I can say about it that won’t spoil the reading experience, aside from that the language and imagery is lovely and haunting. Definitely worth a read. [Ira]

“From the Editorial Page of the Falchester Weekly Review” by Marie Brennan — This story, told in the form of letters to the editor in a scientific journal, is set in the Lady Trent series but also stands alone. Great on its own, and it also gives a good taste of my favorite currently active series. [KJ]

(11) BATMAN TRIBUTE. In “Batman from beginning to retirement and beyond,” says Carl Slaughter, “The brooding knight broods in front of friends, foes, partners, himself, and time.”

Monster Hunter Siege is the sixth novel in the Monster Hunter series. When Monster Hunter International’s top hunter was given a tip about some hunters who had gone missing in action, he didn’t realize their rescue mission would snowball into the single biggest operation in MHI’s history. This exciting series is urban fantasy with muscle—and guns!

Upcoming appearances by other Baen authors are listed on the publisher’s official calendar.

(13) THE MIDNIGHT HOUR. If Star Wars toys are your thing, get ready for you and your roll of hundred-dollar bills to stay up late. “Disney plans midnight ‘Star Wars’ event to unveil ‘Last Jedi’ toys”.

Walt Disney Co and major retailers will release the galaxy’s newest “Star Wars” toys at a Sept. 1 midnight event ahead of the holiday debut of the next film in the saga, “The Last Jedi,” company executives told Reuters.

The marketing push called “Force Friday II” is a sequel to an event Disney used to build buzz for merchandise tied to the 2015 movie “The Force Awakens.”

(14)  HE SAID… Are the writers for Beavis and Butthead now working for New Scientist? “Far-off asteroid caught cohabiting with Uranus around the sun”. Or maybe it’s just me….

A rare Trojan asteroid of Uranus has been found, following the same orbit as the planet. Its existence implies there could be many more of these companion asteroids, and that they are more common than we thought.

A Trojan asteroid orbits the sun 60 degrees ahead of or behind a planet. Jupiter and Neptune have numerous Trojans, many of which have been in place for billions of years. These primordial rocks hold information about the solar system’s birth, and NASA has just announced plans to visit several of them in the 2020s and 2030s.

But Saturn and Uranus live in a rougher neighbourhood: the giant planets on either side of them yank Trojans away through their gravitational pull. So Saturn has no known Trojan, and Uranus had only one.

…But what if they’re stuck in a spacesuit for days on end? Not so easy.

NASA has taken steps to address the problem and recently announced the winner of the Space Poop Challenge, a competition organized by its NASA Tournament Lab (NTL), hosted by the HeroX crowdsourcing initiative.

The winner of the prize was Thatcher Cardon, a family physician, Air Force officer and flight surgeon, whose system “MACES Perineal Access & Toileting System (M-PATS),” who utilized his knowledge of keyhole surgery to develop his design.

The competition was aimed at finding a safe, medically sound solution from taking waste away from astronauts’ bodies if confined for a long period of time.

…More than 5,000 proposed solutions from a total of 19,000 registered competitors from over 150 teams from “every country and continent on Earth (including Antarctica) participated, according to a press release.

(16) HE ROCKS IN THE TREETOPS ALL THE DAY LONG. Who among the 4 main Robins is the best?  Batman, Ra’s al Ghul, Nightwing, Red Hood, and the Robins provide insight and opinion.

[Thanks to Cat Eldridge, Carl Slaughter, JJ, John King Tarpinian, and Mark-kitteh for some of these stories. Title credit belongs to File 770 contributing editor of the day Nigel.]