(1) KILL YOUR DARLINGS. Jason Cordova of Mad Genius Club thinks after a month of writing, you need “NaDecEdMo!”

Why is that, though? Why do we get to have a NaNoWriMo and not a NaDecEdMo? Because NOBODY wants to be that butthead who is celebrating an author who is gutting their baby.

That’s what editing is, in a nutshell. It’s taking out that precious baby of yours and changing it, ruthlessly making it better. It’s a rough, rough time for an author when this is going on. The author is feeling insecure about their novel as is, and now they have to look at it with a critical eye. That cute scene that you really liked but now doesn’t really fit into the story as much? Gutted like a day old fish on Market Street.

(2) SALE. Francis Hamit of Brass Cannon Books is running an experiment – and you can save.

A consultant has told us selling e-books for 99 cents each will inspire those customers who like them to then buy the print edition to have forever. . What the heck! We’ll try it. All fiction e-books and mini-memoir are now going for 99 cents each in e-book form for a limited time only. Starting February 5th, 2016.

Since I am always behind the curve on everything, I have just become aware that nowadays people put one space after a period in manuscripts instead of two spaces. Is this widespread? Do I need to learn to do this? I’ve been doing it the other way for 40 years; old habits die hard.

(4) BY THE NUMBERS. Natalie Luhrs of Pretty Terrible looks for statistical evidence of bias in “A Brief Analysis of the Locus Recommended Reading List, 2011-2015”.

I want to preface this by saying that I believe that the Locus staff works very hard on this list and intends for it to be as comprehensive as they can make it. I know how hard it can be to stay on top of the flood of fiction and other affiliated works that are produced each year.

But I also believe that Locus has a responsibility to think about their biases so that lists of these type don’t inadvertently perpetuate structural inequalities–as our field’s magazine of record, this Reading List is published around the same time that Hugo nominations open and while qualified members of SFWA are filling out their Nebula nomination ballots.

One of her many graphs shows —

…The majority of the authors or editors of the works included on the Locus list are male–over 50% each year. Female authors or editors come in second in the 35-40% range. Mixed gender collaborations are next, followed by non-binary authors and editors….

(5) A NEWS STORY ABOUT NO NEWS. Bleeding Cool gives a status on some aging litigation in “Disney Pursuing Stan Lee Media For Half a Million, Finds Bank Accounts Emptied”.

Paul run the (then) largest political fundraiser ever for her Senatorial campaign and tried to get Bill Clinton onto the board of his company Stan Lee Media. The company was set up to exploit Stan Lee‘s name after he left Marvel Comics, to benefit from his new creations for comics, TV and films.

It all went sour rather. And Stan Lee Media – a company no longer associated with Stan Lee – has spent the last ten years trying to claim rights to all Stan Lee’s creations from Marvel – and now Disney. Despite six courts saying they have no claim.

Stan Lee Media have claimed that Lee transferred all his creative rights to the company in exchange for a large sum of money, and that includes Spider-Man, The Avengers, the Hulk. X-Men, Thor and the like. Unfortunately the courts really don’t see it that way. And Disney was awarded almost half a million in costs.

The ongoing issue has come up again largely because of old political connections involving Stan Lee Media co-founder Peter F. Paul, a businessman and former convicted drug-dealer notorious for a series of allegedly illegal international political dealings. Paul fled the country during the initial SLMI investigation for Sao Paulo, which became a mini-scandal in United States politics when it was uncovered that Paul had been a major financial backer of Hillary Clinton’s U.S. Senate Campaign and had even lobbied for former president Bill Clinton to join Stan Lee Media’s board of directors. Paul at one point produced videos supposedly showing Stan Lee himself participating in campaign-finance calls with the Clintons as proof of his (Lee’s) complicity in the company’s bad dealings (Lee counter-sued over the matter). However, it didn’t stop Paul from being convicted to a ten year prison term in 2009 for fraud.

(6) MESKYS’ GUIDE DOG PASSES AWAY. It’s as if the beginning of the New Year also signaled the opening of the floodgates of misery, with one sad loss after another.

Ed Meskys, a blind sf fan, reports, “This morning I lost Gyro (public name ‘Killer Dog’) my guide dog with 9 years of service, just weeks past his age of 11…. He had been welcome at many conventions, SF and [National Federation of the Blind]. He will be my last dog guide as I am weeks short of 80, cannot bend to pick up after a dog, and have trouble with stairs….”

(8) MITCHELL OBIT. Edgar Mitchell, who 45 years ago became the sixth man to walk on the moon, died February 4, on the eve of his lunar landing anniversary. He was 85.

Ever since my writeup on leaving R my blog has been getting a lot more traffic than usual and many more comments. Usually this would be fine except the topic means that a lot of those comments are blathering about whiny SJW babies or actual death threats. 28 at the last count.

But, sure, it’s the social justice people who are oversensitive and fly off the handle…

This isn’t a formal study so my definition of arsehole can be basically whatever I want it to be. I settled for any comment which exhibited one of the following traits:

So I took this definition and hand-coded the comments and grabbed the data. We ended up with 107 users, of whom a mere 40 weren’t arseholes, producing 183 comments in total. Then I worked out their referring site and geolocated their IP address, et voila.

This appears to be one of those increasingly misnamed and outdated categories, but based on the previous nominees, it has apparently become the functional equivalent of “best SF-related site”. Using that as a guideline while keeping the eligibility rules in mind, here are the preliminary recommendations for Best Fanzine:

Black Gate succumbed to the genetic fallacy in turning down last year’s nomination; regardless of whether John O’Neill will do the same or not again this year, it remained the best SF-related site in 2015.

People I respect have suggested I publicly demand that Vox Day remove File770 from the Rabid Puppies slate. Then having done so, if Day fails to comply and I ultimately receive a Hugo nomination, they feel I can accept it with a clear conscience.

If I understand Steve Davidson correctly, he wants everyone to make a public statement repudiating slates. I don’t think people are unclear on how I feel about slates, thus it really becomes a question whether — by modeling that behavior — I want to encourage Steve to go around hammering people who don’t post the equivalent of an oath. I don’t.

Consider this point. I have been planning to nominate Black Gate because I’ve been reading it since last year’s Hugo contretemps brought it to my attention, and think they do a terrific job. What if they don’t make a public declaration? Should I leave them off my ballot? And thereby fail to do what I tell every other Hugo voter to do, nominate the stuff they think is the best?

I’m not voting for Black Gate because of a slate, and I don’t intend to be prevented from voting for it by a factor that has nothing to do with what I think about the quality of its work. That’s also why I’m choosing not to follow the advice I received about handling File 770’s apperance on the slate, though the advice is well intended.

The set included four Uranium bearing ore samples, and originally sold for $49.50.  That would be $400 in today’s dollars. 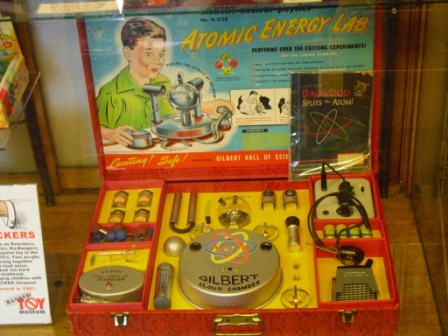 [Thanks to John King Tarpinian, JJ, and James H. Burns for some of these stories. Title credit belongs to File 770 contributing editor of the day Daniel Dern.]