Texas A&M University is set to give “Game of Thrones” author George R.R. Martin the latest link in his maester’s chain this week, as the school offers up an honorary degree to the author.

Martin has a long history with A&M, which has been home to his writings since long before his books were picked up by HBO.

Martin, who calls himself a pack rat, regularly sends copies of just about everything he’s written, produced or been given, from games and calendars based on the series to replica swords and war hammers, to Texas A&M University’s Cushing Memorial Library and Archives. The library boasts a world-renowned sci-fi and fantasy collection and Martin’s works are its crown jewel.

Martin last year gave A&M a first-edition copy of “The Hobbit,” saying at the time that the Cushing library has one of the best science fiction and fantasy collections in the nation. The author acknowledged that A&M — “a place where people shout ‘yeehaw’ a lot, and of course lately (was) known for Johnny Football” — might seem like a strange place for such a collection.

(2) THE MEDIUM IS THE MIXED MESSAGE. Variety reports Hannibal creator Bryan Fuller has been named showrunner and co-creator of CBS’ new Star Trek series. Who suspected Hannibal would be the proving grounds for the next executive at the helm of the Trek franchise?

The new series is set to bow on CBS in January 2017, then move to CBS’ All Access digital subscription service. It will be the first original series to launch on a broadcast network but air primarily on an SVOD service.

“Bringing ‘Star Trek’ back to television means returning it to its roots, and for years those roots flourished under Bryan’s devoted care,” said Kurtzman. “His encyclopedic knowledge of ‘Trek’ canon is surpassed only by his love for Gene Roddenberry’s optimistic future, a vision that continues to guide us as we explore strange new worlds.”

The creative plan is for the series to introduce new characters and civilizations, existing outside of the mythology charted by previous series and the current movie franchises.

(3) WHO COUNTS. The Den of Geek tells us Steven Moffat has confirmed the length of the runs for the next seasons of his two BBC shows.

Speaking after receiving his OBE the other day, Steven Moffat confirmed that Doctor Who series 10 will have 13 episodes. And Sherlock series 4 will have three episodes.

(4) HMM. Anthony at the Castalia House Blog puts his finger on a problem with the Potterverse in “So You Made It Into Hufflepuff”.

Hufflepuff is noteworthy in the Harry Potter series for being supremely un-noteworthy (“A Very Potter Musical” famously lampshades this after the end of its opening number “Gotta Get Back to Hogwarts” with the immortal line “What the hell is a Hufflepuff?”). The Hufflepuff we know the best is Cedric Diggory. Diggory is a fine character, but he probably doesn’t even rank in the series’ top twenty most interesting. Even in “Goblet of Fire” we just don’t learn that much about him, except that he’s apparently an honorable man, a hard worker, and a capable wizard. Besides that – nothing.

Vox Day, pointing to the post in “The Shortchanging of House Hufflepuff”, extended the critique —

I could never figure out what Hermione was doing in Gryffindor when she was an obvious Ravensclaw. I mean, being intelligent and studious to the point of being annoying about it was the primary aspect of her personality.

(5) SORT YOURSELF. Moviepilot reports “Harry Potter Fans Are Officially Being Sorted Into Hogwarts Houses & They’re Not Happy About It!”

For now though, it seems that J.K. wants to take us back to basics. Over the weekend an official Sorting Hat quiz went live on Pottermore — and unlike the numerous ones you’ve probably taken over the years, this is the real deal because it was developed by the author herself.

Which #Hogwarts house are you in? Be sorted and have a wand choose you, now on #Pottermore: https://t.co/9WQlPBk4lg pic.twitter.com/5bMAjywjLL

The quiz determines whether you’re in Gryffindor, Slytherin, Hufflepuff, or Ravenclaw by asking you a series of personality questions and by placing you in a number of unique scenarios.

….Naturally, most Potter fans jumped at the chance to try out this new sorting utility — yet instead of uncontrollable excitement, many were overcome with a deep sense of despair. Indeed, when the quiz dropped, the Internet became awash with staunch criticism. Why? Well, because most people were mad they didn’t get into the house they felt they deserved to be in.

(6) A SECOND OPINION. Or if you think it’s too much bother to register at Pottermore, you can always take this quickie quiz at Moviepilot — “The Ultimate Harry Potter Sorting Quiz Will Prove Which Hogwarts House You Belong In”.

“There’s nothing hidden in your head the Sorting Hat can’t see, so try me on and I will tell you where you ought to be!”

I took it and was identified as a Gryffindor. See what a reliable quiz this is?

Mr. Cooper celebrated scientific achievement, addressed scientific failure and demystified what was behind both.

Reviewing his book “Apollo on the Moon” in 1969 in The New York Times, Franklin A. Long, who was the vice president for research at Cornell University, said that Mr. Cooper’s description of an imminent mission to the moon was “remarkably evocative” and that a reader “gets the feel of what it is like to be a crew member in the lunar module.”

Mr. Cooper began his book “Thirteen: The Apollo Flight That Failed” this way: “At a little after 9 Central Standard Time on the night of Monday, April 13, 1970, there was, high in the western sky, a tiny flare of light that in some respects resembled a star exploding far away in our galaxy.”

The flare was caused by a cloud of frozen oxygen — a “tank failure,” as NASA engineers delicately described it — that would cripple the service module and jeopardize the crew’s return to Earth. The story was told in the 1995 film “Apollo 13,” starring Tom Hanks.

Brian Troutwine, in The Huffington Post, called Mr. Cooper’s book “one of the best technical explanations of a catastrophic failure and its resolution ever written.”

He was a descendant of famed author James Fenimore Cooper.

(10) VISIT OTHER WORLDS. NASA has issued a new series of space tourism posters. 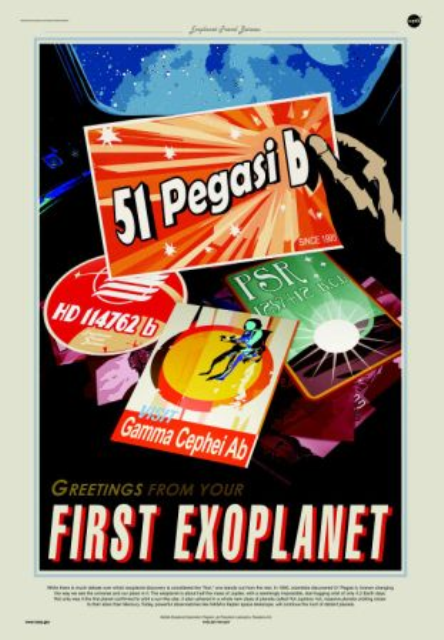 Each new poster mixes a bit of that reality with an optimistic take on what exploring our solar system might actually look like someday. The poster for Venus calls for visitors to come see the “Cloud 9 Observatory,” which isn’t far off from an idea that’s been thrown around at NASA. The poster for Europa advertises the ability to see underwater life — something that doesn’t feel so far-fetched considering the moon is home to a global subsurface ocean.

(11) RABID PUPPIES. Vox Day has advanced to Rabid Puppies 2016: Best Editor (short-form), and in this category has only one name for his slate, Jerry Pournelle, editor of There Will Be War, Vol. X.

(12) NUMEROUS SUGGESTIONS. George R.R. Martin gave his recommendations for Short Form in “A Rocket For The Editor, Part Two”. He covers quite a few names. Martin also emphasizes that he feels there is an equivalency between last year’s slate makers and advocates for No Award in the Best Editor (Short Form) category.

All that being said… the slates, by whatever means, did throw up some legitimate Hugo-worthy nominees in this category last year, though not as many as in Long Form. One of those stood well above the others, IMNSHO. The Hugo really should have gone to MIKE RESNICK. Resnick has a long and distinguished career as an anthologist, one stretching back decades, and while he has plenty of rockets on his mantle at home, and even more crashed upside down rockets on the shirts he wears at worldcon, he had never been recognized for his work as an editor before. In addition, Resnick had founded a new SF magazine, GALAXY’S EDGE; in an age when the older magazines are struggling just to keep going, starting up a new one is a bold act (maybe a little insane) that deserves applause. But even more than that, Resnick has been a mentor to generations of new young writers, featuring them in his anthologies and now his magazine, advising them, nurturing them, teaching them, even collaborating with them. His “writer babies,” I have heard them called. In a way, Resnick is a one-man Clarion. Finding and nurturing new talent is one of an editor’s most important tasks, and Resnick has been doing it, and doing it well, for decades.

He got my Hugo vote. He got a lot of other Hugo votes as well. But not enough to win. As with Long Form, this category went to No Award. The work that the Sad and Rabid Puppies began to wreck this Hugo category was completed by Steve Davidson of AMAZING, Deirdre Saoirse Moan, and the rest of the Nuclear Fans. Resnick was never part of the slates, fwiw. He took no part in the Puppy Wars on either side, preferring to stay above the fray. And he did deserve a Hugo. But guilt by association prevailed, and he was voted down with the rest. A real pity.

Now there are Nuclear Fans, to go along with the other names people get called? And, in the circumstances, a very unfortunate misspelling of Moen’s name?

(13) SHATNER ON NIMOY. Jen Chaney reviews Leonard: My Fifty-Year Friendship With A Remarkable Man by William Shatner (with David Fisher) in the Washington Post. 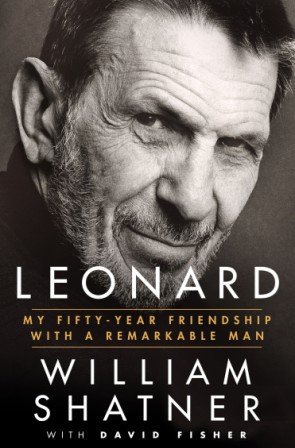 A few years before Leonard Nimoy died last February at age 83, he stopped speaking to William Shatner, his close friend since their many “Star Trek” adventures. As he explains in “Leonard,” his new book about that relationship, Shatner still isn’t sure what caused Nimoy to freeze out his Starship Enterprise other half. “It remains a mystery to me, and it is heartbreaking, heartbreaking,” Shatner writes. “It is something I will wonder about, and regret, forever.”

That revelation, both personal and laden with questions, is very much in keeping with the overall tone of Shatner’s book. At times, the actor recounts his connection to Nimoy with great candor and reverence, particularly when he discusses how that bond solidified after the death of Shatner’s third wife, Nerine Kidd, who drowned in the couple’s pool in 1999. But readers may wish they got a little more fly-on-the-wall perspective on the lengthy friendship born in a place where few are: on the set of an iconic sci-fi TV series. As Shatner says at one point, “When I think about Leonard, my memories are emotional more than specific.” His memories often read that way, too. 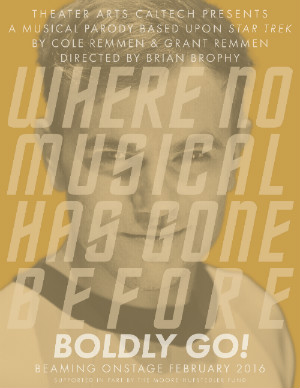 Boldly Go! follows the intrepid crew of the Starship Enterprise, along with some new characters, on an exciting and hilarious adventure.

Assumptions will be confronted, paradigms challenged, alliances tested, and new contacts made – whether for good or ill as yet to be seen. And it’s all set to a side-splitting tour de force of musical mayhem!

A series of short videos about the production can be viewed at the site.

Watched this Simon Pegg movie yesterday.  Even in period costume most of the actors were recognizable…except one who looked very familiar but I could not put my finger on who he was.  The ending credits identified him as Ray Harryhausen…a pleasant surprise.

Harryhausen can be seen in the closing credits at 1:03.

[Thanks to Brian Z., John King Tarpinian, Chip Hitchcock, Michael J. Walsh and Andrew Porter for some of these stories. Title credit goes to File 770 contributing editor of the day Steve Wright.]